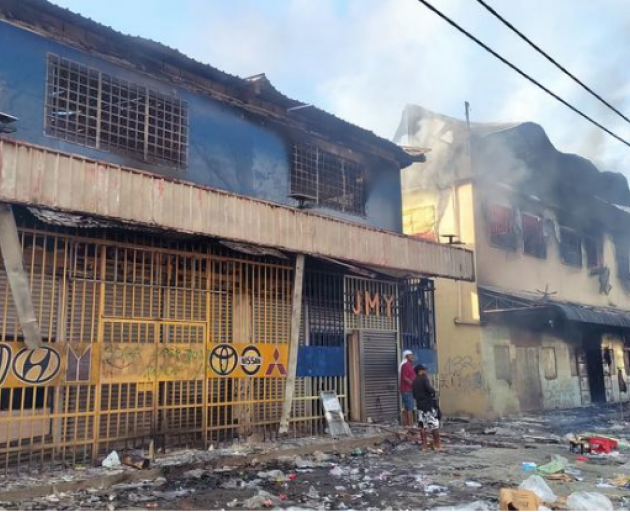 Chinatown in Honiara, where many buildings were torched. Photo: Georgina Kekea/RNZ Pacific
Police in Honiara have confirmed that three bodies have been found in one of the burnt out buildings in Chinatown.

A protest on Wednesday calling for the Solomons Prime Minister Manasseh Sogavare to step down lapsed into major unrest and three days of rioting.

A police forensic team are on the ground and investigations are underway.

A spokesperson said they are yet to confirm the identities of the bodies.

Local reports say the remains are of some of the looters trapped inside the building.

Most of the rioting and looting took place in Chinatown, and our correspondent there said only six buidlings are left standing.

New Zealand has no plans to evacuate its citizens

New Zealand has no plans to evacuate its citizens from the troubles in the Solomon Islands, Honiara.

A protest on Wednesday calling for the Solomon Islands prime minister Manasseh Sogavare to stand down lapsed into major unrest which local police were unable to contain.

A spokesperson from the Ministry of Foreign Affairs and Trade said on Friday evening, the High Commission in Honiara is providing Safe Travel advice to New Zealanders in the Solomon Islands.

This includes following the instructions of the local authorities.

The spokesperson said any New Zealanders in the Solomons who have not registered with Safe Travel are advised to do so as soon as possible. 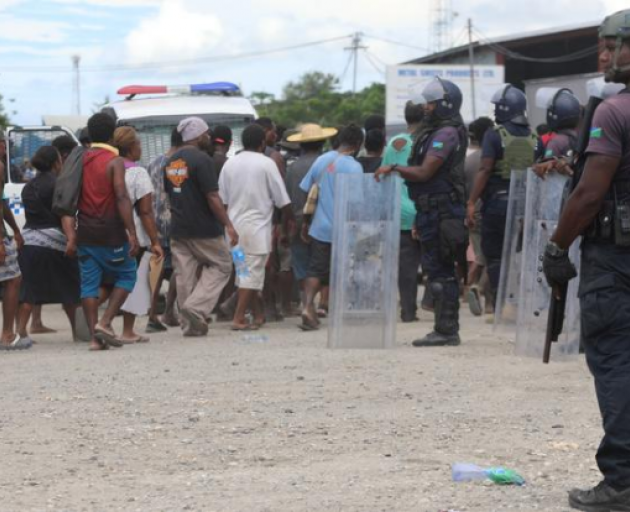 Photo: RNZ Pacific
There are 43 New Zealanders registered on SafeTravel, all believed to be in Honiara.

New Zealanders in Solomon Islands are also urged to exercise care and remain where they are if it is safe to do so, a MFAT spokesperson said in a statement.

"Since 19 March 2020 we have advised all New Zealanders do not travel overseas," the spokesperson said.

No request for help from Solomons govt - NZ

Parker said New Zealand had not received any requests for assistance from the Solomons government.

"New Zealand is a long-standing partner of Solomon Islands, and there are deep and enduring connections between our two countries," Parker said.

"Our engagement in Solomon Islands is guided by the principle of tātou tātou, or all of us acting together for the common good.

"We stand with the government and people of Solomon Islands through this difficult time," Parker said.

Community step in to help police

RNZ Pacific correspondent in Honiara Georgina Kekea said police had been able to contain the crowd from going into the main CBD area in Honiara.

She said most of the rioting and looting has been taking place in Chinatown and not so much in the West side of Honiara. 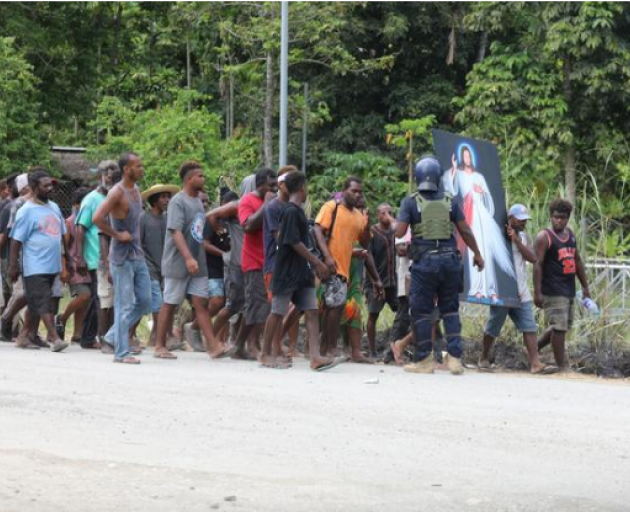 Peaceful demonstration by people in the community in Honiara. Photo: RNZ Pacific
Kekea said members of the community in West Honiara came forward to help the police and make sure people do not damage shops or buildings along the CBD.

"Friday afternoon, some of the mothers and people in the Henderson community marched along the main CBD asking those participating in the riots to just stay back.

"It's the Eastern part of Honiara that is still not under control," Kekea said.

She also said people were looking for food on Friday and that will be an issue for those in Honiara in the coming days.

The overnight curfew declared by the Solomon Islands Governor General in the capital Honiara has ended.

Sir David Vunagi said the 7pm to 6am curfew would be repeated everyday until revoked.

Sir David had said it was a necessary measure for the preservation of public security.

Only authorised officers were allowed to move within the city during the curfew hours and anyone found breaching the restrictions would be prosecuted.