State police take over US town after riots 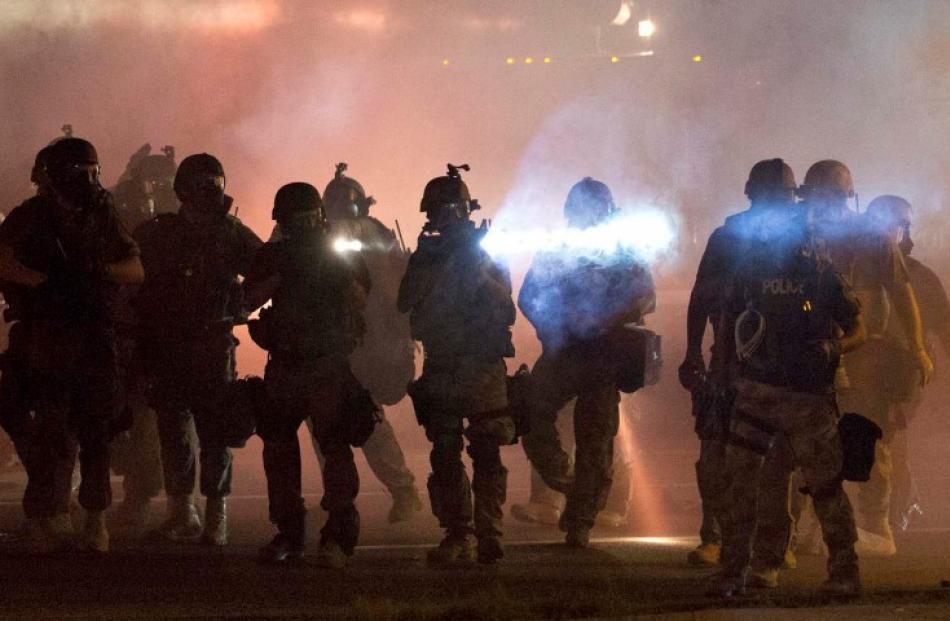 Hoping to bring "a softer front" to the law enforcement presence in Ferguson after five nights of clashes between police and protesters, the Missouri State Highway Patrol will take over directing security in the city, Missouri Governor Jay Nixon has announced.

Security will be overseen by Capt. Ron Johnson, who is black and said he grew up in the community and said "it means a lot to me personally that we break this cycle of violence."

The announcement was made hours after President Barack Obama sought to calm the tense situation, saying that there was "no excuse" for "excessive force" by police or for looting or violence aimed at law enforcement. Obama said the police have a responsibility to be "open and transparent" about the events that led up to the fatal shooting of a black teenager by a Ferguson police officer Saturday that spawned the protests.

Nixon said earlier that he would change the tone in the St. Louis suburb after the unrest and the Ferguson police chief said he was also working to de-escalate tensions between officers and demonstrators.

"What is happening now is not what any of us want," Chief Thomas Jackson said at a press briefing, adding that officers and community leaders are planning to better "facilitate" demonstrators' right to rally.

Nixon did not reveal details about the changes, but assured the crowd gathered at a community meeting that "you will see a much better and much different tone" in the city. He said the "vast, vast majority" of the demonstrations have been peaceful and urged those in the city to use their energy in a positive way.

The comments from the governor and police chief came in response to escalating clashes between law enforcement officers and protesters since Saturday's police shooting of Michael Brown, an unarmed, black 18-year-old. After an intense scene Wednesday night - which included the detention of two journalists - top elected officials expressed alarm over the heavy police response.

U.S. Attorney Gen. Eric H. Holder Jr. said in a statement Thursday that he was "deeply concerned that the deployment of military equipment and vehicles sends a conflicting message" to the community and law enforcement "must seek to reduce tension, not heighten them."

Holder also said Ferguson police had accepted the Justice Department's offer of crowd-control help as it continues to investigate the Brown shooting.

Sen. Claire McCaskill, D-Mo., told reporters Thursday that although she backs the decision by law enforcement authorities to not release details of the Brown case, the strong police response to protests in Ferguson had become a problem.

"I think the demilitarization of the response is going to help a lot" to ease strife in the suburb, she said. When asked about community tensions, she described the problems as "a wound that's not going to heal overnight."

The ACLU of Missouri filed a lawsuit Thursday to obtain copies of initial police reports regarding Brown's shooting after St. Louis County police rejected the group's open-records request for the incident report.

At the community meeting Thursday morning, dozens of beleaguered residents and community leaders filled the pews at the Christ the King United Church of Christ in neighboring Florissant, and it didn't take long for the grievances to pour out.

Although they were upset over the shooting, community members - especially the parents of young children - indicated their primary concern had become the police response to the demonstrations that followed.

Sierra Smith, 27, lives in the Canfield apartment complex not far from where Brown was shot and where many of the worst clashes with police have occurred. Speaking into a microphone, she described how at night the police had blocked the streets to the apartment complex, making it almost impossible for residents to get in or out.

A neighbor had a baby three weeks ago, Smith said, and had run out of formula and diapers for her newborn. The police blocked them from going out for more.

"We get up to the top of the street and they tell us to turn around," Smith said. "‘Go back where you came from.'

"If you go out, you better be wearing the armor of God," Smith said.

Others expressed disgust for white out-of-towners who were seen lighting trash bins on fire and carrying around Molotov cocktails. The Sunday looting and vandalism that shut down neighborhood stores was also stopping residents from doing needed errands.

As they were leaving a nearby Walgreens on Wednesday evening, he said, his son spotted a police officer driving by. "He was so terrified that he started crying," Combs said.

Combs said he came to Thursday's meeting because he didn't want his son to grow up feeling like that.

Police sealed off the area that was the scene of vandalism and looting Sunday night. At least 10 people were arrested.

One of them was St. Louis Alderman Antonio French, according to a Twitter post by a friend of his, Liz Peinado. During the unrest, French has posted videos on social media of protests and the police presence on the streets. His arrest could not be independently confirmed late Wednesday.

During the nighttime confrontation, protesters with shirts wrapped around their faces held signs that read, "Hands up, don't shoot," as police closed in on the crowd. The slogan has been adopted by protesters because witnesses have said Brown was running with his hands in the air when a police officer shot him to death Saturday.

In live amateur video posted to social media, police could be heard telling the group to leave the area or they would be arrested. Clouds of tear gas were visible in the background.