Three Mexican nationals have been arrested over a $A16 million ($NZ19.31 million) cocaine haul.

The joint investigation by the Australian Federal Police (AFP) and United States Immigration and Customs Enforcement (US ICE) has resulted in the disruption of a transnational syndicate, the AFP said on Monday.

AFP national manager border and international, Tim Morris, said the operation has prevented the distribution of 64.6kg of cocaine onto Australian streets.

"This seizure has saved the Australian community more than $A18.7 million in associated health and social costs," Mr Morris said.

On October 10, US ICE informed the AFP it had detected cocaine in cargo from the United States, which was destined for Melbourne.

The cocaine allegedly originated in Mexico and was concealed within four concrete cylinders weighing 210kg each and containing ceramic goods.

American and Australian authorities co-ordinated the transport of the shipment to Australia.

They have been charged with attempting to import and conspiracy to import a commercial quantity of a border controlled drug.

They will appear in the Melbourne Magistrates' Court on Monday morning.

The maximum penalty for those offences is life imprisonment and or a $A825,000 fine. 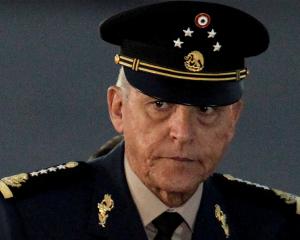