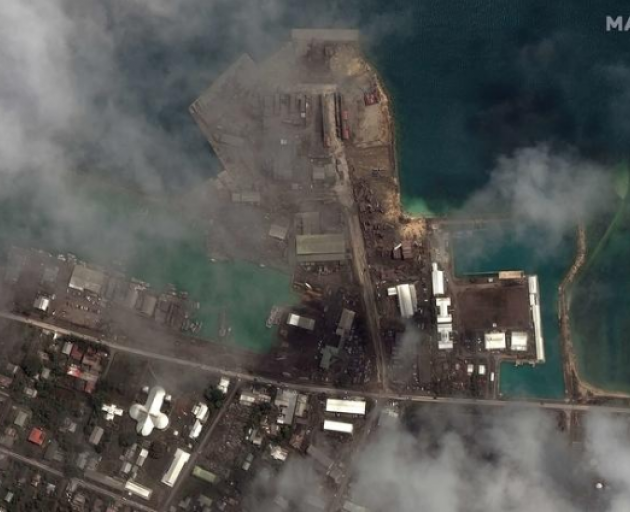 Volcanic ash covering the port at Nuku'alofa on 18 January Photo: Handout / Satellite image ©2022 Maxar Technologies
Tonga faces a long road to recovery, with most of the population affected by the violent eruption and tsunami that followed, and many areas still scrambling to restore basic necessities.

Almost 85% of the country's population of about 105,000 people has been affected by last weekend's volcanic eruption and tsunami, the Tongan government said.

It shared more details about the impact of the twin disasters in a statement.

The death toll remains at three: those killed were Telai Tutu'ila, 65, from Mango Island, Lataimaumi Lauaki, 49, from Nomuka Island, and British woman Angela Glover, 50, who lived in Nuku'alofa.

Eight people on Nomuka Island were injured, and another six people had minor injuries (four on Fonoi Island, and two on Tungua Island).

The health centre on Nomuka was washed away by the tsunami, so a field hospital has been set up on the island.

The homes and all the belongings of 62 people from Mango Island were washed away, so they've been taken to Nomuka. However food and water are now both running low on Nomuka, and the group is likely to be taken on to Tongatapu Island.

Ships from Australia, the UK, Japan and the US are on their way to Tonga carrying supplies and personnel, as well as a New Zealand navy ship. Two New Zealand navy ships and a Fijian vessel have already reached the island country, and two supply runs have been carried out by C-130 Hercules from New Zealand.

But aid deliveries arriving at sea are facing significant challenges, since the volcanic fallout on the ocean surface is damaging ships, the Tongan government said. Domestic flights remain suspended.

"Tonga's recovery from this disaster is going to be long-term and I think we need to ensure we keep the momentum up.

"After Tonga's got enough water we're going to have to rebuild, and it's going to be a long road to recovery."

Lord Fakafanua was in Auckland yesterday taking part in a drive to raise supplies for Tonga.

Tech billionaire Elon Musk has reportedly offered assistance in the form of internet terminals, and Lord Fakafanua says any technological assistance would be a great help.

He was among those who appealed to Musk to help reconnect the Tongan people to the internet, using his company SpaceX's Starlink satellites.

"I think it's great, Elon Musk is one of the pioneers of technology... and this will help highlight the issues we have in the islands, and it would be great to have him on board to reconnect with our loved ones," he said.