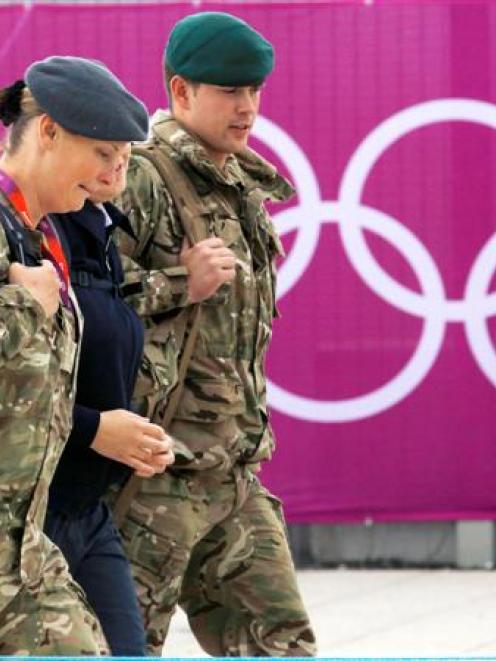 Members of the armed forces walk past the Olympic rings on the perimeter of the Olympic Park in Stratford. REUTERS/Andrew Winning
Britain has deployed 1200 extra soldiers in a last-minute effort to bolster Olympic security while global diplomatic tensions started to play out among athletes and politicians three days ahead of the opening ceremony.

The additional troops, which took the military contingent at the 2012 Games to well over 17,000, were called in to cover an embarrassing shortfall left by private security group G4S, the world's largest by some measures, in the run-up to the Games.

The company caused a scandal by failing to meet its target for the number of guards it could provide, and on Tuesday said that it had deployed around 5,800 security personnel, still short of its revised objective of 7,000.

Police stressed that they were content with security arrangements for the greatest show on earth, which kicks off in Cardiff, Wales, on Wednesday with a soccer match between the women's teams of Britain and New Zealand.

"We've done all the planning, we've looked at the way in which terrorists have attacked in the past and we try to make sure that none of those could get through our security measures," said Chris Allison, Britain's national Olympic security adviser.

Hundreds of thousands of visitors have descended on London and a million extra people are expected in the city each day of the July 27-Aug. 12 event, putting pressure on a creaking transport system, some of which dates from the 19th century.

Yet for all the grumbling by a notoriously critical media and Londoners braced for disruptions to their daily lives, the sense of excitement was palpable with the Games just around the corner and the sun shining brightly after weeks of rain.

Some 11 million visitors will witness the thrill of victory and despair of defeat as some of the world's greatest athletes, from Jamaican sprinter Usain Bolt to U.S. swimmer Michael Phelps, battle for the ultimate prize in sport - Olympic gold.

Britons, buoyed by Bradley Wiggins' historic victory in the Tour de France cycling marathon at the weekend, are confident of another impressive medals haul after success in Beijing in 2008.

The Games will cost nine billion pounds ($14 billion) to stage, and in spite of criticism of the outlay during straitened economic times, officials have defended the spending as most goes into regenerating run-down east London for the long term.

As well as a flood of ordinary people, luxury yachts of the super-rich have moored close to the stadium. Expected dignitaries include Russian President Vladimir Putin, presidential candidate Mitt Romney and U.S. First Lady Michelle Obama.

Politics played out before the world's media as much as sport in the final countdown to kick-off, with a debate over how to mark the 1972 Munich attack by Palestinian militants that killed 11 Israeli Olympic team members moving up the agenda.

Security is already a sensitive issue in London. The day after the capital was awarded the 2012 Games, the city was hit by suicide bomb attacks that killed 52 people.

Widows of those killed in 1972 arrive in London on Wednesday to pressure Olympics organisers to mark the 40th anniversary of the tragedy, stepping up a long campaign to organise an official commemoration.

Romney joined the fray, saying he supported a minute's silence at Friday's opening ceremony, after Olympic chief Jacques Rogge paid a surprise tribute to the fallen athletes in London on Monday.

British Prime Minister David Cameron may use the Games, which unite world leaders, businessmen and celebrities as well as more than 16,000 athletes and 20,000 journalists, to press Putin over his ties to Syrian President Bashar al-Assad.

Sources said he would accompany Putin to an Olympic judo match if the Russian leader attends the Games, and may urge him to drop his support for Assad's regime which is engaged in a violent conflict with rebels seeking to topple him.

In a reflection of the world they have left behind for the duration of the Games, participants from Libya and Egypt will represent the new face of the "Arab Spring" after uprisings ousted the old regimes.

Distance runner Guor Marial, a refugee from Sudan's civil war, is fighting for permission to compete as an independent athlete because his newly-established country, South Sudan, has not had time to create a National Olympic Committee.

Marial, who lost 28 members of his family in the war, has refused an invitation to run for Sudan, from which South Sudan split last year.

"For me to just go and represent Sudan is a betrayal of my country first of all, and is disrespecting my people who died for freedom," he said.

Syria's small Olympic team has arrived and is expected to compete but it was unclear how it will be received given the level of condemnation of Assad.

Around 30,000 people, including family members of the huge cast of men, women and children taking part, filled the main Olympic stadium on a balmy Monday evening for the first open rehearsal of the opening ceremony.

Most of them honoured Oscar-winning "Slumdog Millionaire" director Boyle's pleas for details of the event to remain secret and off the public pages of Twitter and Facebook.

The opening ceremony mastermind has voiced frustration at the media and members of the public who have leaked elements of the ceremony, which is inspired by William Shakespeare's play "The Tempest" and has a strong musical element.

What is officially known is that the first sequence recreates a pastoral idyll, complete with geese, sheep, horse and cart, fields, fences and a game of village cricket. The ceremony is expected to be artistic and intimate compared to the opening extravaganza in Beijing.

What the media has since leaked includes elements of the next "act" of the show, recreating the "dark Satanic mills" of William Blake, whose poem including this reference to the Industrial Revolution became an anthem to England.

Even at the full rehearsal there were key moments missing, and mystery surrounds both the location of the Olympic cauldron and the identity of the individual given the honour of lighting it in front of a television audience of more than a billion.

The crowd faced some travel delays on their way home late on Monday, underlining the logistical challenge London faces, to be made worse by planned strike action by passport officials and some train drivers on key Olympic dates.

The British government on Tuesday asked the High Court to block the strike action by the border staff union.

London's "Games lanes", reserved for Olympic officials, athletes, sponsors and the media, open on Wednesday, and are sure to spark more complaints, including from the city's famous black cabs.

Londoners have labelled them Zil lanes after the Soviet limousines given special privileges.