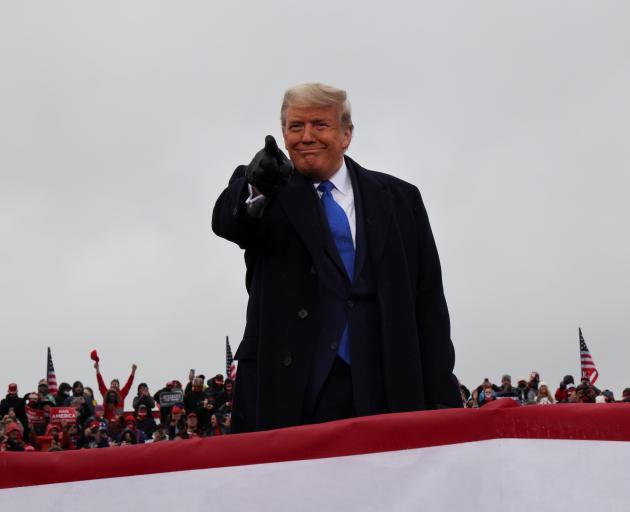 Donald Trump during a campaign rally at Capital Region International Airport in Lansing, Michigan. Photo: Reuters
Trailing in national opinion polls, President Donald Trump has again attacked US election mechanics, saying it would be "inappropriate" to take extra time to count the tens of millions of ballots cast by mail in his race against Democrat Joe Biden.

While Trump, a Republican, cast doubt on mail-in voting on Tuesday, Biden offered a message of unity in a rally in the state of Georgia as part of a foray into Trump campaign territory a week ahead of Election Day on November 3.

This Election Day, you must stop the Anti-American Radicals by delivering Joe Biden and the Far-Left a thundering defeat at the ballot box! Get out and VOTE! On November 3rd we must finish the job and Drain the Swamp once and for all!! #MAGA pic.twitter.com/w1EHpIapxt

Early voting, both by mail and in-person, has surged to record highs as Americans become energised by a high-stakes election while at the same time looking to avoid exposure to the coronavirus.

The huge volume of mail ballots - more than 45 million have already been cast - could take days or weeks to tally, experts say, meaning that a winner might not be declared the night of November 3, when polls close.

"It would be very, very proper and very nice if a winner were declared on November 3, instead of counting ballots for two weeks, which is totally inappropriate and I don't believe that that's by our laws," Trump told reporters at the White House before leaving for a campaign rally in Michigan. "We'll see what happens."

Trump has repeatedly and without evidence suggested that an increase in mail voting will lead to an increase in fraud, though election experts say that is rare in US elections. Mail voting is a longstanding feature of American elections, and about one in four ballots were cast that way in 2016.

Democratic officials, activists and voters have voiced deep anxieties that Trump will not accept the outcome if he loses. Biden has called it his biggest fear.

Democrats are voting early in greater numbers than Republicans this year, according to data from the US Elections Project at the University of Florida, but some states do not allow officials to even begin counting them until the polls close. Stopping counting on Election Day, as Trump suggests, could give the Republican an advantage.

More than 68.5 million votes have been cast so far, approaching half the total 2016 vote. Trump has repeatedly and without evidence claimed that mail-in voting will lead to widespread fraud.

Republicans in a series of court battles around the United State are trying to limit the time voters have to send in ballots.

Former Vice President Biden (77) has a lead over 74-year-old Trump in national opinion polls, but the race is tighter in battleground states including North Carolina, Florida and Arizona where the election might be decided.

This is our opportunity to leave the dark, angry politics of the past four years behind us.

It's time to come together and unite the country.

Biden made a foray into traditional Republican territory on Tuesday by visiting Georgia, in a show of optimism that his campaign can end four years in office of Trump, who has overseen the ravaging of the country by coronavirus, an increase in racial tensions and the fraying of ties with European allies.

The Democrat delivered a message of unity in Georgia, which has not supported a Democrat in a US presidential election since 1992.

"I'm running as a proud Democrat, but I will govern as an American president. I'll work with Democrats and Republicans. I'll work as hard for those who don't support me as for those who do. That's the job of a president, a duty of care for everyone," Biden said.

He was speaking at a rally in Warm Springs, at the vacation home of former President Franklin Delano Roosevelt, the Democrat who led the nation during the Great Depression and through World War 2.

The 2020 presidential campaign has been unlike any other as a raging pandemic that has so far killed more then 225,000 Americans pushes record early voting.

Nearly half a million people in the United States have contracted the novel coronavirus in the last seven days, according to a Reuters tally, as cases and hospitalisations set fresh records in hot spots in the Midwest. More than 5,600 people died from the virus nationwide in the last week.

In another show of confidence for Biden, former New York mayor Michael Bloomberg said on Tuesday he will spend around $15 million on television advertising in Texas and Ohio in the coming days.

On Tuesday, Trump visits Nebraska and also stages rallies in Michigan and Wisconsin - two states he won by narrow margins in 2016 but where polls show him now trailing Biden - before stopping overnight in Nevada.

A Reuters/Ipsos poll on Tuesday showed Biden with a 52%-43% lead over Trump in Michigan, with the two statistically tied in North Carolina.

Trump’s planned rally in Nebraska, meanwhile, suggests his campaign is preparing for a close finish. The state apportions three of its five electoral votes by majority vote in its three congressional districts, with the Omaha-area district a potential pick-up opportunity for Biden while the rest of the state is expected to go for Trump.

In a scenario where Trump and Biden finish close to a tie in the US Electoral College, that Omaha district with its single vote could make the difference of clinching the 270th elector needed to win.

Former President Barack Obama was also back on the trail in Florida on Tuesday to boost Biden, his former vice president.

At a drive-in rally in Orlando, Obama urged Democrats to vote in large numbers to avoid a repeat of the 2016 election when Trump won the battleground state and defeated Hillary Clinton.

"We have to leave no doubt. We can't be complacent," he said. "We were complacent last time. Folks got a little lazy, folks took things for granted, and look what happened. Not this time, not in this election." 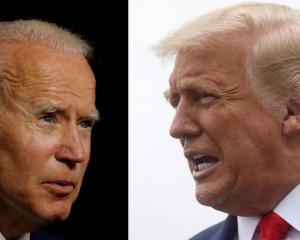 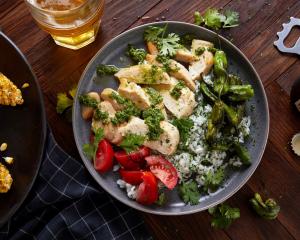