Trump lavished with pomp and pageantry 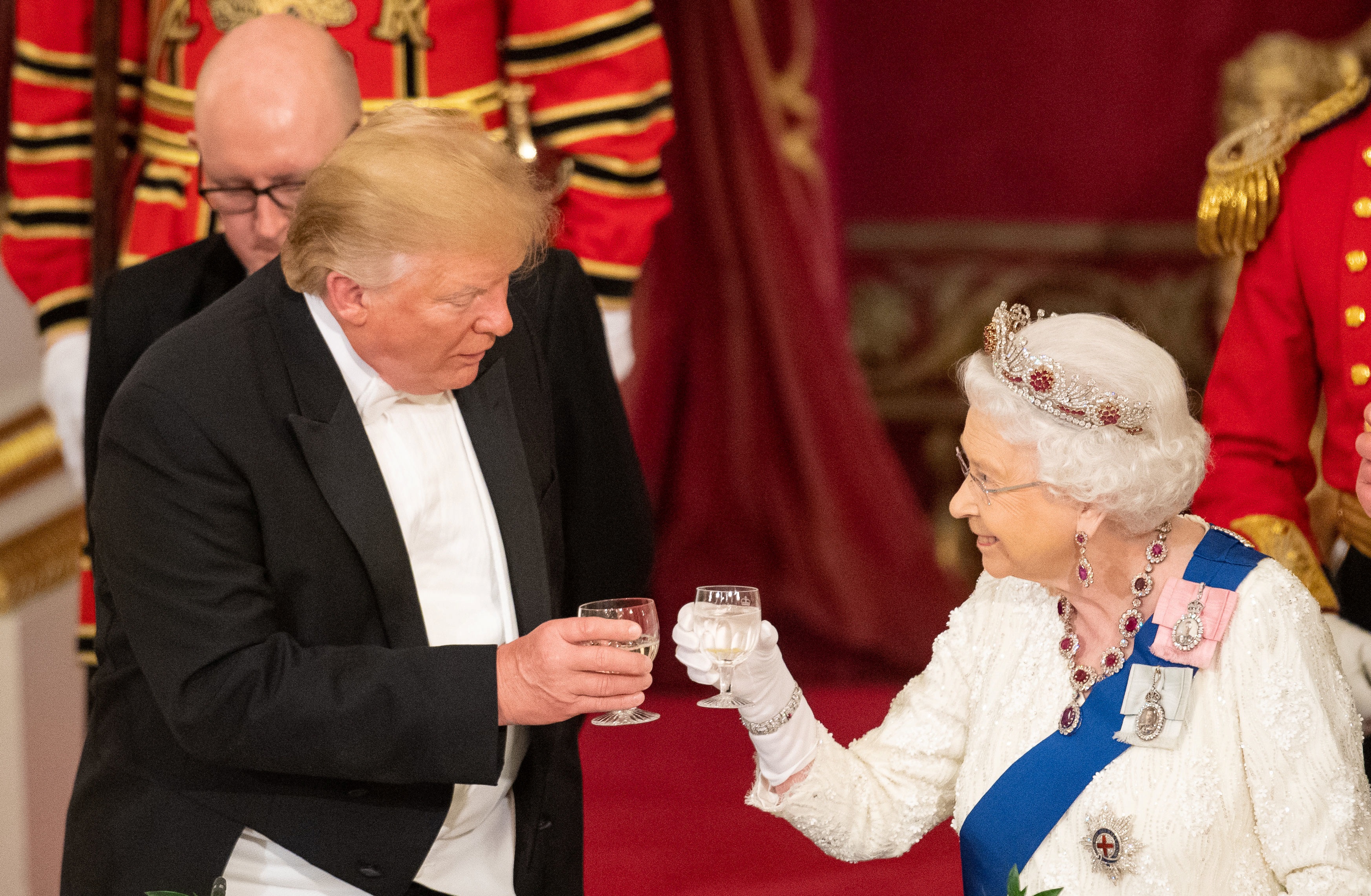 Trump's interventions into Britain's political crisis over Brexit had threatened to overshadow his state visit to London, but instead the president appeared to relish the royal red carpet that his hosts laid on for him and wife Melania.

The three-day trip was cast as a chance to celebrate Britain's "special relationship" with the United States, boost trade links in a post-Brexit world and reaffirm security cooperation ahead of the 75th anniversary of the allied D-Day landings in World War 2.

The Queen's husband Prince Philip (97) retired from official duties in August 2017 and was not present for the visit.

"Our common values and shared interest will continue to unite us"Her Majesty the Queen raises a toast "to our continued friendship" between the UK and US at the Buckingham Palace state banquet she is hosting for US President Donald Trumphttps://t.co/90Lr9ihCa7 pic.twitter.com/Zrk5GzEq2o— BBC News (UK) (@BBCNews) June 3, 2019

"The bond between our nations was forever sealed in that great crusade," Trump said in a speech at the lavish banquet in his honour at Buckingham Palace on Monday night (local time).

"As we honour our shared victory and heritage, we affirm the common values that will unite us long into the future; freedom, sovereignty, self-determination, the rule of law and reference for the rights given to us by almighty God."

President @realDonaldTrump and @FLOTUS are guests of Her Majesty Queen Elizabeth II for a State Banquet at Buckingham Palace with The @RoyalFamily! pic.twitter.com/JS4ZCWP1xa— The White House (@WhiteHouse) June 3, 2019

While the proudly unpredictable 45th US president lavished praise on the 93-year-old Elizabeth, his views on Britain's exit from the European Union, on the possible successor to Theresa May as British Prime Minister and a row over China's Huawei have cast a pall over the visit.

Even as he flew into the British capital, he reignited a feud with London Mayor Sadiq Khan - who had written on Sunday that Britain should not be rolling out the red carpet for Trump - describing the mayor as a "stone cold loser".

The state visit was promised by Prime Minister May back in January 2017 when she became the first foreign leader to meet Trump after he took office.

The first day of such a visit is customarily taken up with a series of royal engagements and ceremonies.

At Buckingham Palace, Melania - in an elegant, white below-the-knee Dolce & Gabbana dress with navy blue collar and belt and a custom hat by Herve Pierre - stood alongside the Queen and Charles's wife Camilla, while Charles and the president inspected the guard.

The  Queen, President Trump and the First Lady view a display of items from the Royal Collection illustrating the enduring relationship between the US and the UK. #USStateVisit pic.twitter.com/gPuI5Ziab6— The Royal Family (@RoyalFamily) June 3, 2019

After lunch with Elizabeth and other senior royals, the Queen gave the Trumps a guided tour of artefacts of American historical interest from the royal collection. She also showed him some of her family's golfing memorabilia in a nod to the president who owns two Scottish golf courses.

The Queen's second son Prince Andrew then accompanied him to Westminster Abbey, coronation church of English monarchs for 1000 years where he laid a wreath at the Grave of the Unknown Warrior, before tea with Prince Charles at his home, Clarence House.

The day culminated with the opulent formal dinner, where men wear white tie coats with tails and women evening gowns.

"Mr President, as we look to the future, I am confident that our common values and shared interests will continue to unite us," the Queen said.

"Tonight we celebrate an alliance that has helped to ensure the safety and prosperity of both our peoples for decades, and which I believe will endure for many years to come."

In response, Trump heralded the British monarch, saying she "embodied the spirit of dignity, duty and patriotism that beats proudly in every British heart".

Away from the pageantry, Trump has already waded into Britain's turbulent domestic politics, where more than a dozen candidates are vying to replace May, who announced last month she was quitting after failing to get her EU divorce deal through parliament.

Before the trip, he praised May's Brexit-supporting rival, former foreign minister Boris Johnson, saying he would be a "great" potential prime minister and also called for arch-Brexiteer Nigel Farage, a scourge of May's ruling Conservative Party, to conduct talks with the EU. 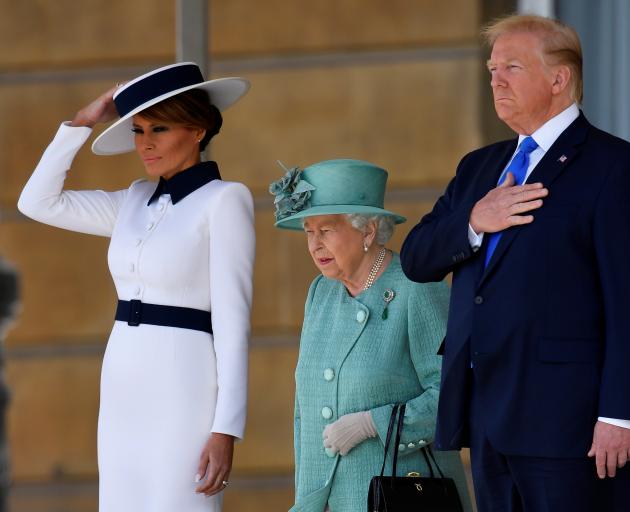 Trump, who has regularly criticised May's Brexit tactics, said Britain must leave the bloc on the due date of October 31 with or without a deal.

"The relationship with the United Kingdom is very strong," he wrote on Twitter during his visit on Monday. "Great love all around. Also, big Trade Deal is possible once UK gets rid of the shackles. Already starting to talk!"

Brexit is the most significant geopolitical move for the United Kingdom since World War 2 and if it ever happens then London will be more reliant on the United States as ties loosen with the other 27 members of the EU.

The second day of Trump's trip will focus on politics, including a breakfast with business leaders, talks with May in 10 Downing Street, a news conference and a dinner at the US ambassador's residence. 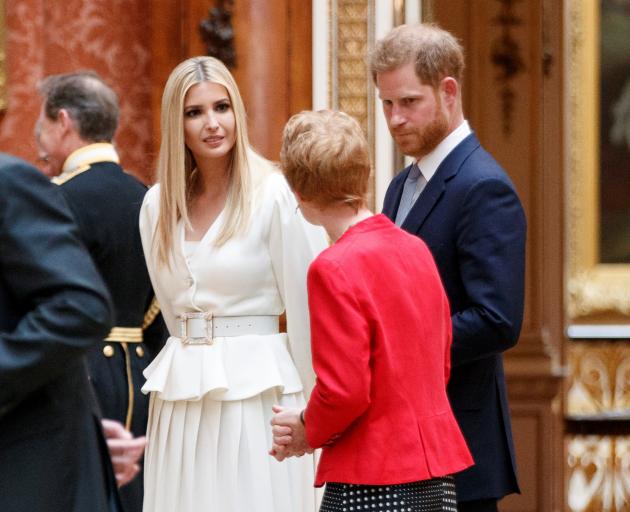 The state banquet in London is a family affair for the Trumps, with Donald and Melania joined by the president's four adult children.

Senior White House official Ivanka Trump was with by her husband Jared Kushner, who also works in the West Wing.

Donald Trump Jr was there with brother Eric Trump and his wife Lara, a Trump campaign official, who is expecting the couple's second child.

A tuxedo-clad Eric Trump tweeted before the dinner that the United Kingdom is "a very special place" and that it was "an honour for our family to be hosted by Her Majesty."

The president's youngest daughter, Tiffany Trump, was also in attendance. 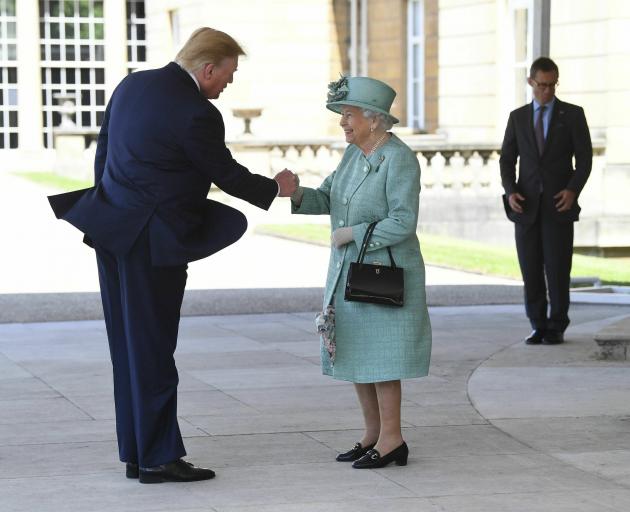 The Queen greets Donald Trump as he arrives for a welcome ceremony in the garden of Buckingham Palace in London. Photo: AP
FISTBUMP OR FIRM HANDSHAKE?
Did President Donald Trump fistbump Queen Elizabeth II when they shook hands at Buckingham Palace?
News photographs made it look as if he did, prompting some to claim on Twitter that the president was not showing the proper respect for Britain's monarch, but really it was just a slightly awkward handshake.

Joe Little, managing editor of Majesty magazine, says that what looked like a fistbump was really just an unusually firm handshake.

Little said on Monday that it was simply an odd camera angle and that it was just a robust handshake. He says that sometimes when people shake the Queen's hand, they treat her like porcelain china, but this wasn't that.

He says some people just shake the tips of the Queen's fingers out of deference.

Little says Trump did follow proper protocol by not offering the Queen his hand to shake but waiting instead for her to offer her hand.