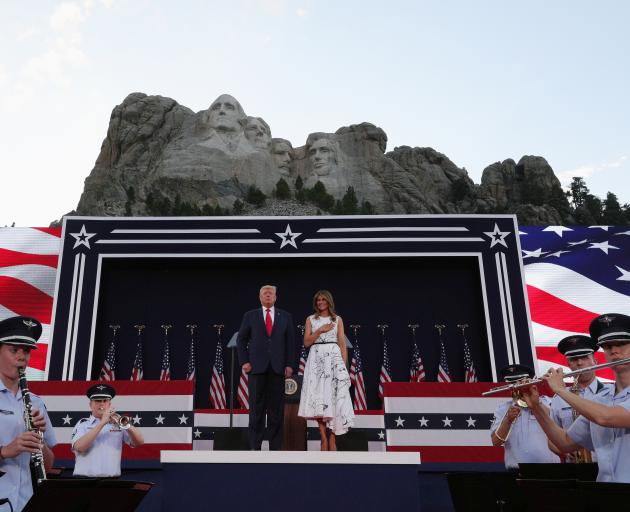 US President Trump and first lady Melania Trump at South Dakota's Independence Day Mount Rushmore fireworks celebrations. Photo: Reuters
President Donald Trump on Friday railed against "angry mobs" that tried to tear down statues of Confederate leaders and other historical figures, warning thousands of supporters at Mount Rushmore that protesters were trying to erase US history.

On a day when seven US states posted a record number of new COVID-19 cases, the pandemic reached Trump's inner circle. Kimberly Guilfoyle, a senior campaign official and the girlfriend of Donald Trump Jr., tested positive in South Dakota before the event, according to Sergio Gor, a Trump campaign official. Trump Jr. has tested negative, Gor said.

The event drew 7,500 people, packed tightly into an amphitheater. Many did not wear masks, defying the advice of public-health officials who have urged Americans to avoid large gatherings to slow the spread of COVID-19.

Speaking underneath a famed landmark that depicts four US presidents, Trump warned that the demonstrations over racial inequality in American society threatened the foundations of the US political system.

"Our children are taught in school to hate their own country," he added.

Trump announced that he would create a "National Garden of American Heros," which he described as a large outdoor park featuring statues of "the greatest Americans who ever lived." He did not provide further details.

In the nationwide unrest following the death of George Floyd, a Black man who died in police custody in Minneapolis, protesters in several cities have vandalized the statues of Confederate generals that led a rebellion against the US government during an 1861-65 civil war.

Protesters in one instance unsuccessfully tried to pull down a statue of US President Andrew Jackson outside the White House. Jackson, known for his populist policies, owned slaves and forced thousands of Native Americans from their homes.

"Angry mobs are trying to tear down statues of our Founders, deface our most sacred memorials, and unleash a wave of violent crime in our cities," he said.

Trump has opposed proposals to rename US military bases that are named after Confederate generals and vowed harsh punishment for people who damage statues.

The evening program was not an official campaign event, but Trump's remarks touched on key campaign themes meant to energize his political base ahead of the Nov. 3 election.

"There is a new far-left fascism that demands absolute allegiance. If you do not speak its language, perform its rituals, recite its mantras, and follow its commandments then you will be censored, banished, blacklisted, persecuted, and punished. Not gonna happen to us," he said.

Mount Rushmore, which depicts US presidents George Washington, Thomas Jefferson, Theodore Roosevelt and Abraham Lincoln, has not hosted a fireworks spectacle since 2009 because of environmental concerns.

Trump advocated for a resumption of the display, and the state says the surrounding Black Hills National Forest has "gained strength" since then and that fireworks technology has advanced.

Native American protesters were arrested after blocking a road to the South Dakota landmark, according to video livestreamed on social media. They have criticized Trump's visit for increasing the risk of spreading COVID-19 and for celebrating US independence in an area that is sacred to them.

South Dakota, a solidly Republican state, has not been hit as hard as other states by COVID-19, but cases in Pennington County, where Mount Rushmore is located, have more than doubled over the past month.

Trump will hold another celebration for the July 4 holiday on Saturday in Washington. 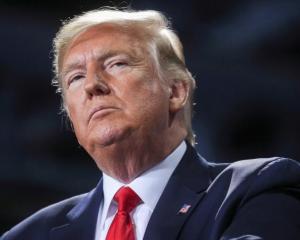 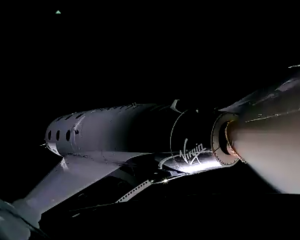 The endless money from our children's bank accounts doled out to NZ business is also Red Fascism. Corporate organisations beholden to the state. This international gaggle of statue burners is nothing short of a world wide coup-detat. They can build nothing. Violent revolutionaries build nothing but misery.

Fascism, by definition is the idea that private companies be in control of government. The BLM movement is not that; Trump is in every respect a fascist. NZ is also moving toward fascism apace; the signs are there; a watered down, corporate controlled media are making sure that nothing controversial reaches the public; there seems to be an attitude in the media that folks who will not run to minimum wage positions are just lazy when insanely high rents leave nothing; this is a modern form of slavery. Credit for this disaster goes to to the right honorable sir John Key who is now chairman of the ANZ bank. The NZ media should be ashamed of themselves for their complicity in hateful, sanctimonious promotion of the failed doctrine known as trickle down.

Another individual with Trump Derangement Syndrome. Trump does not fit the definition of a fascist. You might not like him but that doesn't make him a fascist, only an idiot would say otherwise. BLM is a radical movement which, contrary to its name, is disingenuous about black lives. Its fundamental aim is not protecting black lives, but revolution. BLM as a political project is more interested in fostering white guilt than improving the welfare of black people. In the United States, BLM’s deafening silence on the continuous murders every single day in Chicago amid the riots tells a similar story. All black lives are, evidently, not on a par. BLM’s central claim of a race-based disparity in police homicide in the US is not based in fact. While certain aspects of US policing and crime policy are certainly worthy of reform, it is simply not true that black people are at greater risk of being killed by the US police than whites. The notion of ‘white privilege’ pushed by BLM is, in itself, flatly racist. It crudely claims a vast group of people has a collective privilege, irrespective of the innocence or guilt of individuals within that group. Stick to NZ politics mate!

Another embarrassing opinion from a Kiwi who knows nothing about America. Do you have any mates in Grand Rapids, Michigan, Scranton, Pennsylvania, or Sarasota, Florida? Didn't think so! Americans hate politicians, they want to "drain the swamp" that is Washington, and they don't care how; as long as it's now. Americans don't care that Trump has never had a governing role before, that's what they love about him. Tens of millions of "normal" Americans voted for Donald Trump. People with jobs, families, and college degrees. Where do you get your information to define Trump as a fascist? You think you understand Americans hrough the odd visit to New York or LA? Through the great novels and movies? Or maybe through the biased media? Where? Kiwis also don't understand the hatred for Hillary Clinton by Americans. Clinton's loss had nothing to do with her being a woman, she was the wrong woman. She was another crooked politician. Americans hate the system and she represented the system, she never had a chance. Americans voted for Trump, it's their country, their democracy & most importantly, their vote. Who can you judge people you don't even understand? You Know nothing!

President Donald Trump is not a fascist. Fascism is anti-individualist - and Donald Trump is an arch-individualist. Key's tenure was a disaster for NZ and the National Party that had already lost its way abandoning its core principles. The major parties are tarred with the same brush aided by a compromised media embracing cuddling communism.

I have always been anti-Nazi, because of the racist, inhuman, cowardly policies of the Nazis.
I have always been anti-tRump, and for exactly the same reasons.
For me, MAGA is just the 21st century version of the Nazi Swastika. A symbol of White Supremacy and evil.
The way I see it, every good person on Earth has to be anti-tRump, he is this century's racist despot, and he is no better than last century's racist despot.
If we haven't learned from WW2 we will repeat the horror.
Lest We Forget.

Too funny! People who make comparisons between modern day politicians and Hitler have one thing in common: They usually have very little understanding of the complex period of history about which they make their sweeping generalizations. In the darkest irony, they use a period marked by the mobilization of incredible hatred to launch hatred at those with whom they disagree. Comparing a political figure like Trump to Hitler is vile, vulgar, and lazy. It minimizes a horrific history and reduces the evil mastermind of a massive genocide against 11 million people to being simply “bad” while it conflates a human with no such tendencies or predilections with an amoral architect of genocide. Additionally, it demonstrates a lack of intellectual and restraint in the accuser, who proves himself willing to sacrifice sound facts for a powerful sound byte.This kind of language is likewise a signal to one’s supporters that it is perfectly acceptable to treat the alleged Hitler (in this case, Trump) exactly as one would the heinous Adolf Hitler. In short, only an uneducated dimwit would make such an uninformed comment. I guess the shoe fits you Grizz eh?

Hey Grizz, “Lest we Forget”? You do realize that your reference is off by over 40 years and 1 World War? While the phrase is associated by New Zealanders commemorating Anzac Day, the phrase ‘Lest we forget’ was originally devised to honour the members of the Australian and New Zealand Army Corps who served in the Gallipoli Campaign. The phrase ‘lest we forget’ came from a Rudyard Kipling poem written in 1897 for Queen Victoria’s jubilee. When New Zealanders say ‘lest we forget’, most don’t know the reference is to the loss of Kiplings’ son in 1915. It’s not a reference to Hitler and WWII. Yes, Kiwis have appropriated the phrase to mean all wars but that was never the intent!

Grizz, ever hear of Godwin’s Law? It states the longer an online argument continues and the more heated it becomes, the greater the likelihood that someone will invoke Hitler’s name. It is proven daily. And once Hitler’s name is invoked, there remains no room for discussion or attempts at persuasion, and the argument is over.The Holocaust was the systematic, state-sponsored extermination of 11 million men, women and children (6 million of them Jews). As fewer and fewer of its survivors walk among us, it becomes all the more important that what the Nazis wrought remain the standard for what humanity is capable of doing at its worst, and that it not be lost on anyone that a word – genocide –had to be created to describe the totality of the slaughter. Even if you think Trump is the worst president in the nearly 243-year history of this republic, judge Trump as Trump. Trump is not Hitler.Trump is not Hitler. Hitler was Hitler.