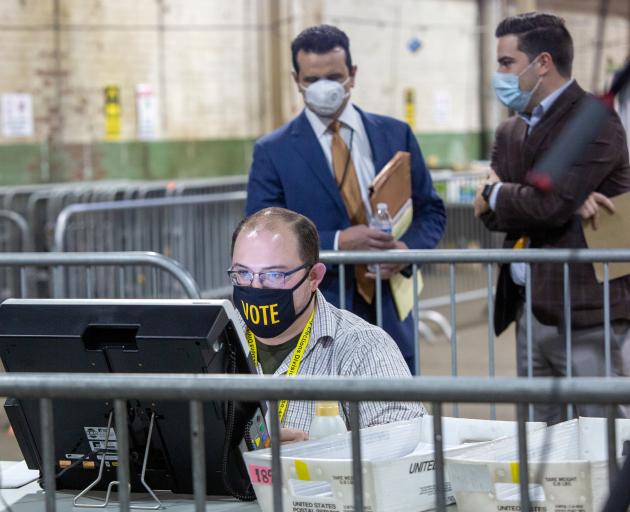 Observers watch a poll worker tabulate ballots at the Allegheny County Election Warehouse after the election in Pittsburgh, Pennsylvania on November 6. Photo: Reuters
US President Donald Trump's campaign has filed a lawsuit in a Pennsylvania federal court, seeking to block state officials from certifying President-elect Joe Biden's victory in the state.

The lawsuit, brought by the campaign and two registered voters, alleged Pennsylvania's mail-in voting system "lacked all of the hallmarks of transparency and verifiability that were present for in-person voters."

The lawsuit claims Pennsylvania officials violated the US Constitution by creating "an illegal two-tiered voting system" where voting in-person was subject to more oversight than voting by mail.

It was filed against Pennsylvania Secretary of State Kathy Boockvar and the boards of elections in Democratic-leaning counties that include Philadelphia and Pittsburgh. Bookcvar's office did not immediately respond to a request for comment.

The president, who has spent months trying to undermine the election results with unproven allegations of fraud, has pledged to go forward with a legal strategy that he hopes will overturn state results that gave Biden the win on November 3.

The Trump campaign and Republicans have brought numerous lawsuits since Election Day over alleged election irregularities. Judges have already tossed cases in Georgia and Michigan.

Separately, some Republican state legislators in Pennsylvania on Monday said in a press release that they would "call for a legislative-led audit of the 2020 election and demand election results not be certified, nor electors be seated, until the audit is complete."

In the United States, a candidate becomes president by securing the most “electoral” votes rather than winning a majority of the national popular vote. Electors generally cast their vote for the winner of the popular vote in their respective states. They are slated to meet on December 14.

Edward Foley, who specialises in election law at the Moritz College of Law at the Ohio State University, said the Pennsylvania legislature couldn't stop the certification of the vote without changing the law.

“To do that, they would have to attempt to amend the state statute and that is going to be vetoed” by Pennsylvania's Democratic governor, said Foley.

The Pennsylvania case was assigned to US District Judge Matthew Brann, an appointee of former President Barack Obama.

tRump considers all votes for Biden to be illegal votes. It's typical dictator stuff, only my supporters can vote soon to be followed by only I can vote.
Getting rid of this abomination will help with the battle to fix all the world's problems, but I want to see his supporters held to account for the atrocities committed by tRump, and the delays to the climate change battle caused by tRump.
If you support him, you're as bad as he is.

Sounds like you are very passionate about the climate change issue Grizz and only see the US from a villian perspective.
Here is some facts from https://ourworldindata.org/co2/country.
Between 2000 and 2017 the US reduced its per capita emissions by 5.08t, Germany which is often held up as an example of what should be done by 1.41t and NZ that we all love so much, by 0.71.
Seems to me that they are doing something right, so what is it?
The availability of cheap natural gas is driving the reduction !
Trump pushed that advantage in the US to the point that they are now energy independent once again.
That is a major driver of peace in the middle-east. No more oil wars.
Here in NZ we now import the coal we use as backup generation from Indonisia because someone wanted to claim some virtue in stopping or our coal mining. There is nothing virtuous in killing jobs, increasing overseas expenditure nor adding transport emissions to a fuel we already have.
As for calling someone an abomination and all their supporters likewise or just deplorables, that need to be "held to account" I get visions of Gulags and re-education camps.
I suggest some socialist history reading is needed.

Your link didn't work however the site does contain this,
More populous countries with some of the highest per capita emissions – and therefore high total emissions – are the United States, Australia, and Canada. Australia has an average per capita footprint of 17 tonnes, followed by the US at 16.2 tonnes, and Canada at 15.6 tonnes.
The USA emits more than three-times its population share.

Very good of you to highlight the success of President Obama in reducing emissions. 2000 to 2017. Still nowhere near enough and has only got worse with Trump in power.

Grizz; you should really research things before you put your foot in your mouth. First, Pennsylvania law requires all ballots to be received by 8 p.m. on Election Day. The governor extended that suspense illegally by 10 days. The US supreme court has ruled that votes recieved after that time need to be segregated and saved. The supreme court will adjudicate the status of these votes in the next few weeks. Second, a recount happens automatically in PA if there is a half percent difference between candidates. So Trump has nothing to do with the recount, the law says it has to happen. Third, If at least three voters in any district request a recount and allege they believe that fraud or error has affected the proceedings then a recount will be conducted. Again, more than 3 voters have done this so it has to occur automatically. Grizz, here is the kicker; It’s even more involved than simply rescanning all of the ballots in the same way that they were initially tabulated. It would have to be a different way so it will be manually recounted. If people were concerned about their vote-counting they had 8 weeks prior to the election to vote. You of all people are not in a position to judge!