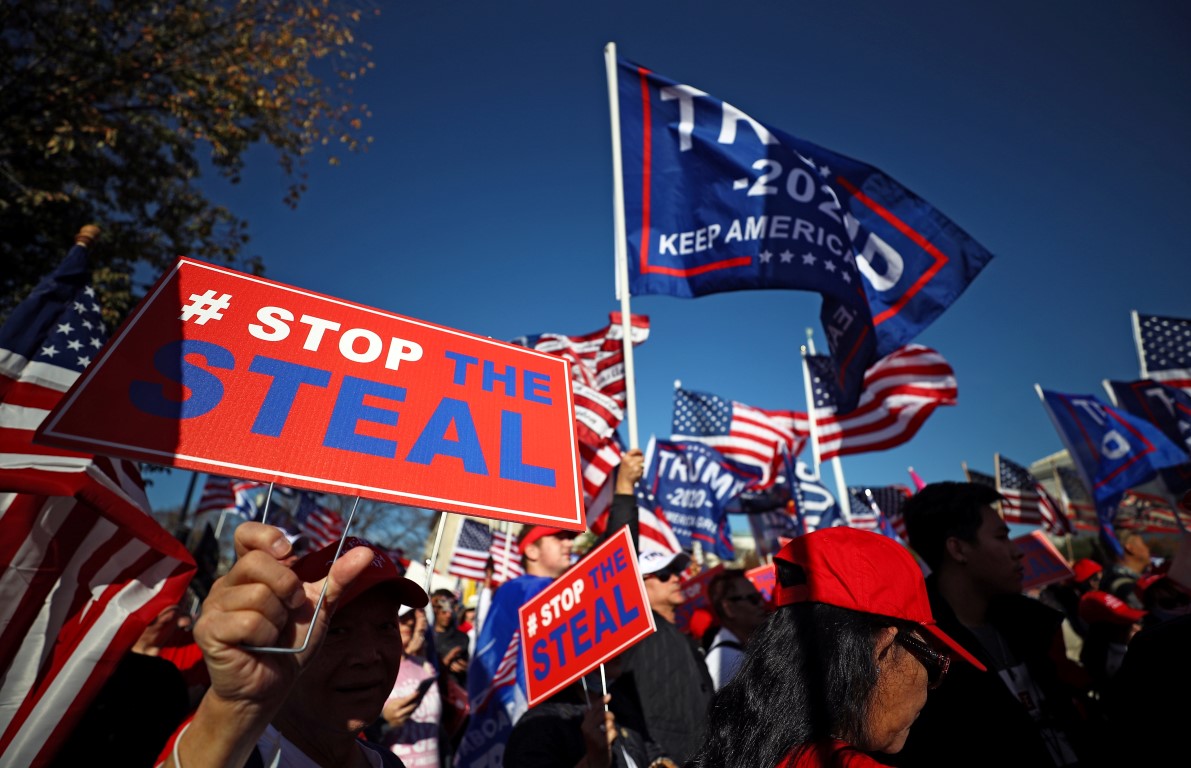 Tens of thousands of President Donald Trump's supporters marched through downtown Washington, echoing his unsubstantiated claims of election fraud and cheering as his motorcade drove past.

A week after Democrat Joe Biden clinched the election, Trump, a Republican, has refused to accept the outcome and has launched a flurry of dubious legal challenges to overturn the results. Election officials around the country have said they saw no evidence of serious irregularities.

Carrying flags and chanting "stop the steal," the protesters walked from Freedom Plaza near the White House to the US Supreme Court building on Capitol Hill as part of the "Million MAGA March," referring to Trump's campaign mantra of "Make American Great Again."

Trump's motorcade briefly drove through the crowds on the way to his golf course in Sterling, Virginia. Demonstrators cheered as the president, wearing a red baseball cap emblazoned with the slogan, waved from inside the presidential limousine.

Donald Tarca Jr., who travelled to Washington from West Palm Beach, Florida, held a massive US flag sporting a giant portrait of Trump.

"I think it was rigged on multiple fronts," he said of the election. "Also, the media was so biased that they convinced millions of Americans to vote for Biden. They hate Trump."

Scores of members of the far-right Proud Boys group, mostly clad in black with some wearing helmets and ballistic vests, were among the marchers. Some left-wing groups staged small counter-demonstrations, including members of the loose movement known as antifa.

Near the Supreme Court, some counter-protesters carried black umbrellas and makeshift shields, while others formed a line of bicycles to prevent pro-Trump protesters from approaching their group from the rear. They called Trump supporters "Nazis;" the protesters shouted back a profanity about antifa.

Reuters witnessed at least half a dozen scuffles and several tense standoffs in which police manned barricades between groups, but the violence appeared isolated.

In one instance, several counter-protesters near Union Station attacked a Trump supporter, who fell to the ground and received medical care after suffering a cut to the head.

The city's police department had made 10 arrests by mid-afternoon, a spokeswoman told Reuters, including four for firearms violations, two for assault and one for assaulting an officer.

Biden spent the morning at his beach house in Delaware meeting with transition advisers, as he has done for much of the week, before returning to his home near Wilmington. The president-elect has largely ignored Trump's repeated claims of fraud, instead focusing on preparing to govern and fielding congratulatory calls from world leaders.

During a bike ride on Saturday morning with his wife, Jill, he answered "yes" when a reporter asked whether he was making progress in selecting his Cabinet appointees.

Despite his bluster on Twitter, Trump began to sound doubtful about his prospects for the first time on Friday (local time), telling reporters "time will tell" who occupies the White House starting on Inauguration Day, January 20.

"This administration will not be going to a lockdown. Hopefully the, uh, whatever happens in the future - who knows which administration it will be? I guess time will tell," Trump said during remarks about the coronavirus pandemic at a White House event.

Biden won 306 votes to Trump's 232 in the state-by-state Electoral College system that determines the winner, according to Edison Research, far more than the 270 required to win the election. He also leads in the national popular vote by more than 5.5 million votes, or 3.6%.

With the election results becoming clearer, Trump has discussed with advisers possible media ventures and appearances that would keep him in the spotlight ahead of a possible 2024 White House bid, aides said.

But his repeated allegations that the election was "rigged" have inflamed his supporters.

"Hundreds of thousands of people showing their support in D.C. They will not stand for a Rigged and Corrupt Election!" Trump wrote on Twitter. Police gave no official crowd size, but witnesses said the number of protesters was far short of Trump's estimate.

The Trump campaign has filed lawsuits in multiple states with little success thus far. Legal experts have said the litigation is extremely unlikely to alter the election outcome.

Biden's pick for White House chief of staff, Ron Klain, said this week that a rapid transition is necessary to ensure the government is prepared to roll out a potential coronavirus vaccine early next year.

The raging pandemic will likely be Biden's top priority. The United States set a new daily record of new cases on Friday for the fourth straight day; more than 244,000 people in the country have died of the coronavirus since the pandemic began.

Wait for it...wait for it...tRump needs to be marched off to prison! There hasn't been a single case of election fraud. Two popular streams of thought from the lunatic fringe here in the South.

I think your inability to use correct grammar for the President's name tells us much more about YOUR fragile state than Trump's.

"unsubstantiated claims of election fraud"
Dead people identified as voting, software identified as switching votes, poll observers blocked from observing and hundreds of affidaidavides with regard to ballot tampering are but a few of the claims.
"overturn President-elect Joe Biden's victory" Biden does not have enough certified Electoral College votes to be called a President-elect. That is a media fabrication.
"far-right Proud Boys group" Is an example of left looking to create an enemy.
I first heard ot the Proud Boys a year ago. One of the leaders is Afro-Cuban.
At https://www.youtube.com/watch?v=QCeY9haPeHA you can watch them engaging in dialog with BLM.
"Biden further solidified his victory on Friday as results from Edison Research showed him winning Georgia" Georgia is doing a hand recount.
"dropped a lawsuit in Arizona" True but there are others.
I can't be bothered commenting on more.
My trust in the media is shattered and I know I'm not alone on that issue.
These are sad time for Western media.

Totally agree. What many Kiwis don't understand is that as long as tRump (shout out to Grizz) doesn't concede he still has a shot. The electors could still pledge their votes to someone other than Biden. Faithless electors could pledge for tRump. Not all, just enought to push Biden under the 270 needed to win. Then it goes to congress for a vote. That would push david over the edge for sure! Will it happen? Probably not but something to think about?

Thank you for the shout out, I am honoured to come across an honest person. And delighted that you use that format, it seems to work well.

Biden was right when he claimed the he had the most extensive and inclusive voter fraud organization in the history of American politics. The computer glitches could not and should not have happened at all, That’s where the fraud took place where they were flipping votes in the computer system or adding votes that did not exist. We need an audit of all of the computer systems that played any role in this fraud whatsoever. They had this all planned, they had the algorithms, they had the paper ballots waiting to be inserted if and when needed and notably President Trump’s vote in the blue states went up enormously. That’s when they had to stop the vote count, and go in and replace votes for Biden and take away Trump votes. I've never seen voting machines stop in the middle of an election, stop down and assess the situation, Nancy Pelosi’s longtime chief of staff is a key executive, Richard Blum, Sen. Feinstein’s husband, a significant shareholder of that company, funny that? Bernie Sanders might very well have been the Democratic candidate. But they’ve stolen it from whoever they wanted to steal it from including him. Grizz and david, over to you for insightful comment!

President Trump handily won reelection on election night…if those ballots had been accurately counted, President Trump would not only be winning the majority of the Electoral College, he would actually be winning the majority of the popular vote in this country. The other thing that’s probably hard for people to understand is, is how massive, how absolutely massive the fraud has been. It has encompassed every possible kind of the old school ballot fraud [but now] we have the 21st century voter fraud. These computer voting systems…enable an entirely new way of cheating on the vote. If your candidate is behind, you frantically do one of two things. You either start discarding ballots for your opponent or you start manufacturing ballots for your guy or you do both. In this instance, they did both. Why didn't Hillary Clinton challenge the voting results in 2016, Because she knew that if she did, the voter fraud that they had attempted at that time would be revealed. The mainstream media has betrayed us. They're part of the coup attempt, this bloodless coup that they attempted that is going to fail. tRump, thoughts?

Complete and utter rubbish.
It does not matter how many deplorables repeat the lie, nor how many times they repeat it, it's still just a lie.

Snozzman, no one should tolerate lies.

I am not a fan of either candidate each with dubious back history. If allegations of fraud can't be proven then Biden has won. The Spectator magazine has a line by line analysis of why the fraud accusers have no evidence.

According to Pennsylvania’s election returns website, ON ELECTION DAY President Trump won nearly two thirds of all votes cast in the state.
The President won 2.7 million votes compared to Biden’s 1.4 million votes. The President’s votes were nearly TWICE AS MANY as Joe Biden’s.

The state reported more than 2.5 million mail in ballots. This number was NEVER SEEN BEFORE IN THIS STATE. As the mail-in ballots were counted, Biden began cutting into the President’s 675,000 vote lead and eventually the state gave the election to Biden. Biden won 2 MILLION OF THE 2.5 million MAIL-IN BALLOTS!

What happened with the mail in votes is almost statistically impossible!...And we are supposed to believe there was nofraud!

Or maybe - just maybe - people viewed his comments on Twitter, saw his interviews and press conferences (in full), looked at his track record - and decided in large numbers that he was a deeply unpleasant and unsuitable person for President. And turned out in high numbers to vote him out. That seems as likely as any massive and complicated voter fraud, that would be impossible to achieve without many, many leaks and errors.

...or maybe the fraud changed the election results?

No evidence of fraud, just repeated hearsay. Proof is required or it didn't happen.