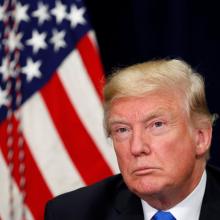 US President Donald Trump on Thursday (local time) called for healing and peace one day after a gunman killed at least 17 people at a Florida high school, saying his administration would work to improve school safety and address mental illness.

Trump said he was making plans to meet with families in Parkland, Florida.

In televised remarks from the White House, Trump, who has an 11-year-old son, said he wanted to address America's children with the message they are "never alone and you never will be."

"You have people who care about you, who love you, and who will do anything at all to protect you," he said.

Democrats have said the shooting underscores the need for tougher gun laws, but Trump did not mention the issue in his brief address, delivered from the White House.

He said he would make school safety the top priority when he meets with governors and state attorneys general later this month.

"We must also work together to create a culture in our country that embraces the dignity of life, that creates deep and meaningful human connections," Trump said, urging children who feel scared or alone to reach out to trusted adults for help.

"We are here for you, whatever you need, whatever we can do to ease your pain," he said.