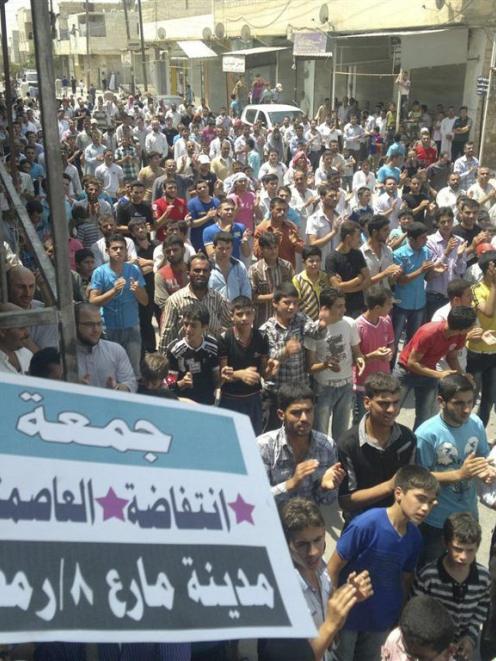 Demonstrators protest against Syria's President Bashar al-Assad after Friday prayers in Maraa, near Aleppo. REUTERS/Shaam News Network/
President Bashar al-Assad's artillery continued to pound rebel-held areas in and around Aleppo in preparation for an onslaught on Syria's biggest city, while neigbouring Turkey called for international steps to deal with the military build-up.

Opposition sources said the shelling was an attempt to drive fighters inside Aleppo from their strongholds and to stop their comrades outside the city from resupplying them.

"They are shelling at random to instil a state of terror," said Anwar Abu Ahed, a rebel commander outside the city.

The battle for Aleppo, a major power centre that is home to 2.5 million people, is being seen as a potential turning point in the 16-month uprising against Assad that could give one side an edge in a conflict where both the rebels and the government have struggled to gain the upper hand.

Turkish Prime Minister Recep Erdogan said late on Friday that international institutions needed to work together to address the military assault on Aleppo and Assad's threat to use chemical weapons against external threats.

"There is a build-up in Aleppo, and the recent statements with respect to the use of weapons of mass destruction are actions that we cannot remain an observer or spectator to," he said at a joint news conference in London with British Prime Minister David Cameron.

"Steps need to be taken jointly within the United Nations Security Council, the Organisation of Islamic Countries, the Arab League, and we must work together to try to overcome the situation," he said.

Cameron said Britain and Turkey were concerned that Assad's government was about to carry out some "some truly appalling acts around and in the city of Aleppo".

Turkey, a former ally of Assad and now one of his fiercest critics, cheered on the rebels in Aleppo.

"In Aleppo itself the regime is preparing for an attack with its tanks and helicopters ... My hope is that they'll get the necessary answer from the real sons of Syria," Erdogan said earlier in remarks broadcast on Turkish TV channels.

U.N. rights chief Navi Pillay urged both Syrian government forces and rebels on Friday to spare civilians in Aleppo, voicing deep concern at the "likelihood of an imminent major confrontation" in the city reminiscent of other deadly assaults.

United Nations Secretary-General Ban Ki-moon also said he was deeply concerned about reports that Syria could use chemical weapons and demanded that the government should state it would not use them "under any circumstances".

But the White House said such a promise from the Syrian president was "certainly not enough" given Assad also paid lip service to a U.N.-backed peace plan and did not follow it.

"Assad's word is not worth very much," White House spokesman Jay Carney said. "Any use of those weapons, any failure to safeguard those stockpiles would be a very serious transgression that would result in those responsible being held accountable."

As the remaining residents of Aleppo braced themselves for more bloodshed, General Robert Mood, the outgoing head of the U.N. monitoring mission, told Reuters he thought Assad's days in power were numbered.

"In my opinion it is only a matter of time before a regime that is using such heavy military power and disproportional violence against the civilian population is going to fall," the Norwegian general, who left Damascus on July 19, said.

The fate of Syria - an ethnically fragmented nation of 22 million people - is likely to determine the future of the wider region amid fears that its own sectarian tensions could spill across borders.

Government troops stationed on the outskirts of Aleppo unleashed barrages of heavy-calibre mortar rounds on its western districts, while Russian-built MI-25 helicopter gunships struck in the east, opposition activists inside the city said.

The heavy fighting follows an audacious bomb attack on July 18 that killed four of Assad's closest lieutenants in Damascus, a development that led some analysts to speculate that the government's grip was slipping.

In Aleppo, rebels have detained at least 100 Syrian officers, soldiers and pro-government militiamen this week, the Syrian Observatory for Human Rights, an opposition group, said.

A video posted on YouTube showed rebels with Kalashnikovs from "The Tawheed (monotheism) Brigade" guarding the detainees, who were lined up on a school playground.

In Damascus on Friday four helicopters flew over southern areas of the capital, firing heavy machineguns into the districts of Hajar al-Aswad and Tadamon as well as into the Yarmouk Palestinian refugee camp, a resident said.

"I can see two above me right now, heading towards Hajar al-Aswad," she said by telephone, the pounding of guns audible in the background.

With U.N. Security Council resolutions for sanctions against Syria vetoed by Russia and China for a third time last week, the United States has said it is stepping up assistance to Syria's fractured opposition, though it remains limited to non-lethal supplies such as communications gear and medical equipment.

Reuters has learned that the White House has crafted a presidential directive, called a "finding", that would authorise greater covert assistance for the rebels, but stop short of arming them.

It is unclear whether President Barack Obama has signed the document, a highly classified authorisation for covert activity.