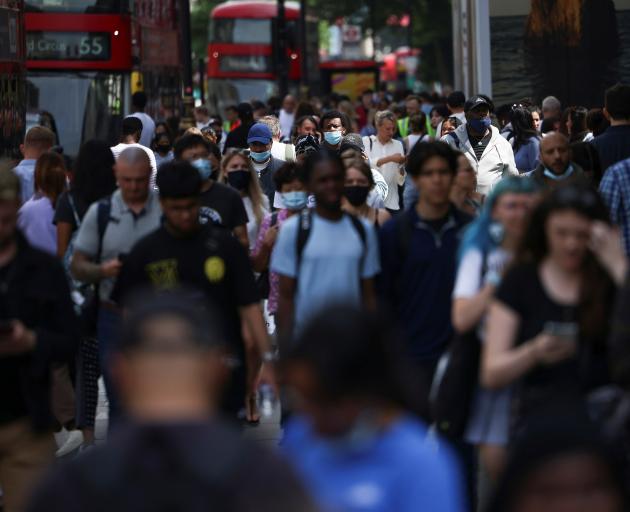 Britain reported its lowest daily total of new coronavirus cases since July 4 on Monday, adding to signs that a recent surge in infections driven by the spread of the Delta variant may have passed its peak. Photo: Reuters
Britain's government has expanded a programme of daily Covid tests to reduce a wave of staff absence created by a high number of new cases and strict rules on self-isolation for people who might have been infected by them.

Hundreds of thousands of British workers, who have been in close contact with someone who tested positive for Covid-19, have been required under public health guidelines to self-isolate for 10 days, creating staff shortages in critical areas.

This rule is due to end for fully vaccinated workers on August 16, and before then workers may be exempted if their employer is selected to host government-run daily Covid-19 tests.

Currently, self-isolation is normally required even if someone subsequently tests negative for Covid-19.

Last week, this programme was announced for 800 workplaces in the food industry, transport sector and some police, firefighters and border guards.

On Monday, Britain's health ministry said it would set up daily testing at a further 1200 workplaces including military bases, prisons and pharmaceuticals factories, as well as for refuse workers, essential utilities and tax collectors.

"Whether it's prison guards reporting for duty, waste collectors keeping our streets clean or workers in our energy sector keeping the lights on, critical workers have been there for us at every stage of this global pandemic," health minister Sajid Javid said.

The new daily testing programme will be unavailable to the vast majority of private-sector employers, however. Growth in the first half of July slowed sharply due to high absence and supermarkets have warned of difficulties fully restocking shelves.

Britain has suffered Europe's second-highest death toll from Covid-19, after Russia, and in recent weeks cases have increased because of the more infectious Delta variant, though deaths have been much lower this time around in the pandemic following widespread vaccination.

Britain reported its lowest daily total of new coronavirus cases since July 4 on Monday, adding to signs that a recent surge in infections driven by the spread of the Delta variant may have passed its peak.

Britain has been closely watched by health experts and by financial markets since most legal restrictions were lifted in England on July 19, not long after new cases reached their highest level since mid-January.