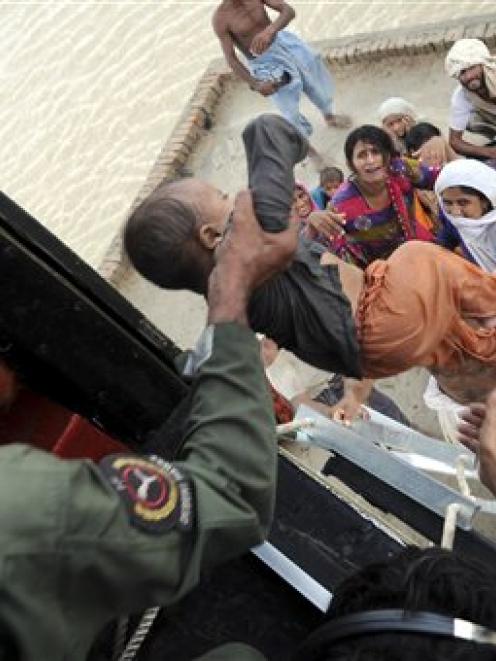 Pakistani army soldiers in a helicopter rescue families stranded by flood water in Sanawan near Multan in central Pakistan on Thursday, August 5, 2010.
US Army choppers flew their first relief missions in Pakistan's flood-ravaged northwest on Thursday, airlifting hundreds of stranded people to safety from a devastated tourist town and distributing emergency aid.

The floods have already killed an estimated 1500 people over the past week, most in the northwest, the centre of Pakistan's fight against al Qaeda and the Taliban. An estimated 4.2 million Pakistanis have been affected, including many in eastern Punjab province, which has seen numerous villages swallowed by rising water in recent days.

The flooding is one of several crises that has hit Pakistan since mid-July, including a suicide bombing in the northwest city of Peshawar, a plane crash that killed 152 people in the capital, and a spurt of politically motivated killings that have left dozens dead in the southern city of Karachi.

Foreign governments and aid agencies have stepped into help the beleaguered government. It has been toughest in the northwest, which has not seen such flooding since 1929, and where many bridges and roads are washed out.

Four US Chinook helicopters landed in the resort town of Kalam in the Swat Valley, which has been cut off for more than a week, according to an Associated Press reporter there. They flew hundreds of people - many of them vacationing there - to safer areas lower down, he said. The northwest valley is a former Pakistani Taliban stronghold.

A US Embassy spokesman said 800 people were evacuated and relief goods distributed.

The United States is unpopular in Pakistan, and Washington will be hoping the relief missions will help improve its image, however marginally. But the mission could draw criticism from nationalist politicians and others in Pakistan who are hostile to the idea of American boots on the ground, even if they are helping after a disaster.

Islamist groups have staged their own relief efforts in the northwest. One, Falah-e-Insaniat, is a charity with alleged ties to Lashkar-e-Taiba, the militant group accused in the 2008 attacks in Mumbai, India, that killed 166 people.

The US military carried out larger operations in the aftermath of the 2005 Kashmir earthquake, as it did in predominantly Muslim Indonesia after the 2004 tsunami. Those missions went smoothly and were credited with boosting Washington's reputation there.

The Pakistani government response to the floods has been criticised, especially because President Asif Ali Zardari left for a visit to Europe soon after the crisis began.

As fresh rains fell on Thursday, bloated rivers gushed toward southern Sindh province, where hundreds of thousands of the most impoverished Pakistanis live along the water because of fertile soil.

Authorities are using 30 boats to help the evacuation of some 500,000 people living along the river banks and have set up 400 relief camps, said Sauleh Farooqi, a top disaster-response official in the province.

In Punjab, the army used boats and helicopters to move stranded villagers to higher ground. Many of the survivors carried what possessions they could, from clothing to pots and pans.

"We are migrants in our home," said Ahmad Bakhsh, 56, who fled flooded Sanawan town. "Oh God, why have you done this?"

An aerial view from a military helicopter showed a vast area between Multan and Muzaffargarh cities looked like a large lake, with the occasional dead cow floating by.

Major General Nadir Zeb, the region's army commander, said many people had ignored flood warnings and only realized the danger of the situation when water entered their cities, towns and villages.

"They risked their lives, but we are reaching them," he said.

Manuel Bessler, the UN's humanitarian chief in Pakistan, said at least 4.2 million people were affected, and that the potential for waterborne diseases was worrisome.

"We are facing a disaster of major proportions," Bessler told reporters in Geneva by telephone. "Even a week after the disaster we don't have all the details. Roads are washed away. Bridges are destroyed. Whole areas are completely isolated and only accessible by air."

The US and Germany announced increases in their aid commitments Thursday.

The US State Department is providing $US25 million ($NZ34.41 million) more, on top of $US10 million announced earlier. Germany is doubling its pledge to $US2.6 million total, the foreign ministry in Berlin said in a statement.

Mark Ward, acting director of US Agency for International Development's office of foreign disaster assistance, said the US money would help non-governmental organisations in Pakistan and support getting food to flood victims.

Many flood victims have complained that aid is not reaching them fast enough or at all.

President Zardari - ever fearful of militant threats - rarely makes public appearances even when he is in Pakistan.

A few months ago, he agreed to constitutional reforms that transferred many of his presidential powers to the prime minister, leaving him more of a figurehead.

Still, victims and rival politicians have pounded Zardari for his trip overseas.

"In the face of such calamity, the people need to feel that their leaders are standing by them," said an editorial in the News, a newspaper that makes no secret of its dislike of the president.

Zardari aide Farahnaz Ispahani said the president was thinking of Pakistan's long-term future in tackling the diplomatic front. Zardari's schedule includes a meeting with British Prime Minister David Cameron, who recently caused a fury in Pakistan by accusing it of exporting terror.

"The government must continue its business so that the nation moves forward," Ispahani said. "This may not play to the galleries, but everything cannot come to a standstill when there is a disaster, especially in a parliamentary democracy with a prime minister and Cabinet in place."