US drought worst since 1956 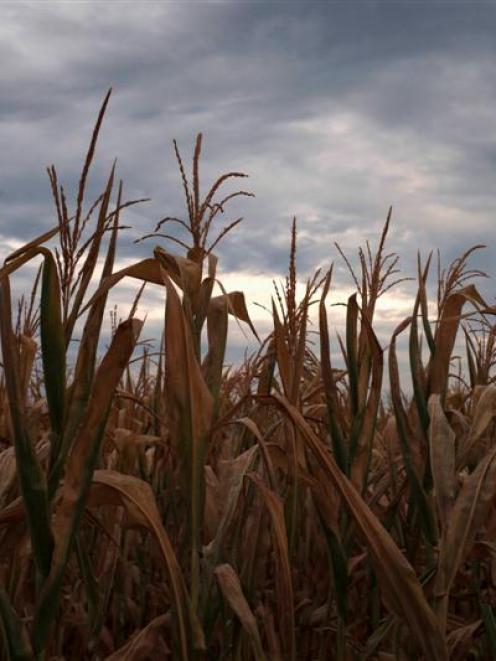 A drought affected corn crop is near Paris, Missouri. REUTERS/Adrees Latif
An expanding US drought, now deemed the worst since 1956, dealt another blow to the corn crop, with conditions deteriorating for a second straight week in the world's top exporter of the grain, US government data shows.

There were signs that the drought, which has been centered in the Midwest, was expanding north and west, putting more crops at risk including in states like Nebraska where large tracts of cropland are irrigated by groundwater and rivers.

The National Oceanic and Atmospheric Administration (NOAA) said in a report on Monday that, based on the Palmer Drought Index, 55 percent of the contiguous United States was under moderate to extreme drought in June. That is the largest land area in the United States to be affected by a drought since December 1956.

In a report titled National Drought Overview, NOAA said that moderate to extreme drought had spread across much of the Midwest and Central to Northern Plains, with pockets of exceptional drought in the High Plains of Colorado.

The drought, previously considered to be the worst since 1988, has been wreaking havoc on developing crops in the U.S. farm belt.

The amount of the corn crop rated by the U.S. Department of Agriculture to be in the good-to-excellent category fell 9 percentage points to 31 percent, well exceeding the 5-point drop expected by traders polled by Reuters on Monday morning.

The drought also pummelled the soybean crop, which was rated 34 percent good-to-excellent, down 6 percentage points from the previous week and one point below estimates for 35 percent.

After one of the mildest winters on record sparked a record pace in planting and promised a bumper harvest, a sudden turn to dry weather in the Midwest has decimated crops.

New-crop December corn futures on the Chicago Board of Trade have soared 54 percent since mid-June, reaching a contract high of $7.78 on Monday.

The surge in prices would cut into margins for meat companies like Smithfield Foods and Tyson Foods and ethanol producers while raising the prospects for higher beef and pork prices in the United States next year as ranchers cull their herds because of high feed costs.

"The drought continues to take a significant bite out of yield potential," said Dan Basse, president and analyst for AgResource Co.

In a report last week, the USDA cut its corn yield estimate by an unprecedented 20 bushels to 146 bushels per acre, igniting concerns that this year's crop could mirror production in 1988 when a similar drought decimated the crops.

"I suspect we're getting very close to something in the 132 to 133 yield range, and it's still falling," Basse said.

"As the crop gets worse, there's an historical precedent for increased abandonment. If you talk to farmers, they'd tell you that there's a fair amount of fields being zeroed out by crop adjusters," Basse said, referring to farmers forgoing their crops to collect crop insurance.

The crop in Missouri, worst hit by the drought, fell to 7 percent from 12 percent while Kentucky's crop improved slightly to 6 percent from 5 percent.

At the beginning of the crop season, the USDA rated 77 percent of the corn crop and 56 percent of the soybean crop in the good-to-excellent category.

The 1988 drought saw sharp reductions in corn and soybean production.

By this point in the growing season of 1988, 18 percent of the corn crop and 20 percent of the soybean crop was rated good-to-excellent, according to USDA data. Crop conditions were rated lower at the beginning of 1988 than this year.

Extreme dryness and heat hurt crops at first in the eastern and southern Midwest. Now western and northwestern states such as Iowa, Nebraska, Minnesota and the Dakotas, all major producers of corn and soybeans, are being affected.

"Crops in the east already have deteriorated rapidly and now heat and dryness are stressing crops in the west and northwest," said Roy Huckabay, analyst for The Linn Group.

The latest weather forecasts call for the drought afflicting the U.S. Midwest to worsen, which will worsen destruction of the country's corn and soybean crops, meteorologists said