US powering ahead with offshore wind farms 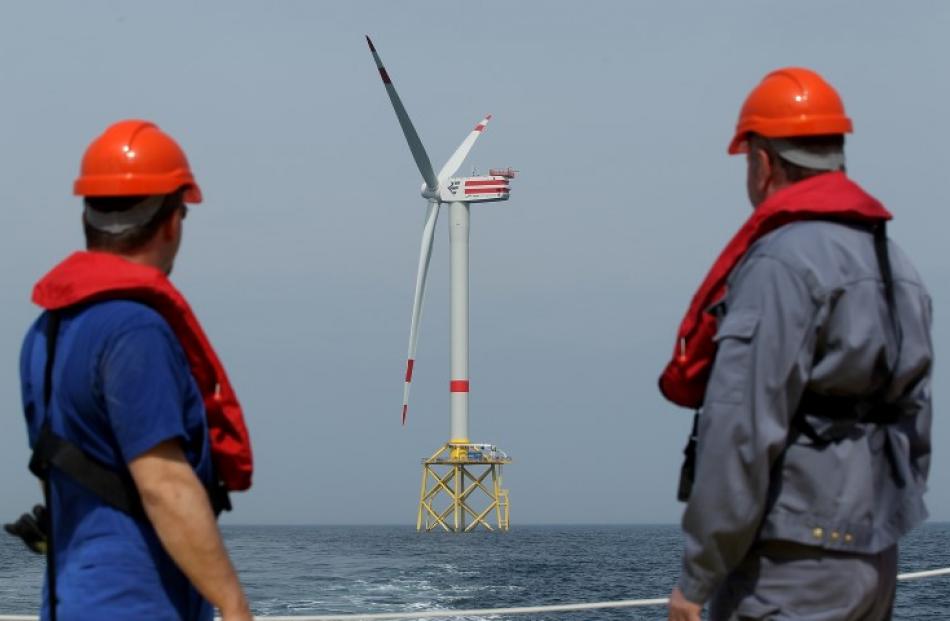 Workers look out at turbines at the Alpha Ventus offshore windpark approximately 70km north of the German coast in the North Sea. Northwestern Europe currently accounts for most of the world's installed offshore wind power. Photo by Getty

Two of the projects - Cape Wind in Nantucket Sound off the coast of Massachusetts and Deepwater's Block Island off Rhode Island - have moved into the initial stages of construction while the others have obtained a lease, conducted extensive studies or obtained a power purchase agreement. Nine are located on the East Coast.

These projects represent about 4.9 gigawatts of possible capacity, according to a new DOE report that was produced by Navigant Consulting. That's a fraction of the 61 gigawatt capacity of onshore wind turbines, which meet nearly 4.5% of US electricity demand in an average year.

Yet offshore wind holds much greater potential for the United States. At least 54 gigawatts of its power could be produced and transmitted to the grid by 2030, according to another new DOE-funded report done by several groups including DOE's National Renewable Energy Laboratory and the University of Pittsburgh.

"We could eventually get there," says the report's principal investigator John Daniel of ABB, a power and automation company. He says the biggest obstacle for offshore wind projects are their high installation costs, especially at a time when a boom in US production of natural gas has lowered its price.

Still, his three-year study found that a massive scale-up of 54 gigawatts of offshore wind power could yield long-term savings. It estimates $7.68 billion a year in lower US energy costs, because power generation would be closer to where it's consumed.

Daniel says a carbon tax, in which fees are levied on the use of fossil fuels that emit heat-trapping carbon emissions, would make it easier for non-polluting wind power to compete economically.

Also essential, say wind supporters, are federal tax incentives. Several, including the Renewable Electricity Production Tax Credit, have expired for projects that did not start construction by the end of 2013. Despite bi-partisan support for wind energy, Congress has not yet renewed them.

Yet wind power could benefit from the recent rise in natural gas prices and the Environmental Protection Agency's proposed 30% cut in carbon emissions from existing power plants by 2030. The EPA proposal, announced in June and slated to be finalized next year, will likely prompt the closure of many coal-fired facilities.

Globally, the costs of offshore wind installations have fallen 6% since 2011, according to the Navigant report. Larger wind turbines are being placed further out to sea where wind speeds are higher and boost production.

Northwestern Europe accounts for most of the world's 7 gigawatts of installed offshore wind power, but China is also moving ahead. In 2013, global capacity rose 50% over the prior year. Half of that growth occurred in the United Kingdom.

"While this upward trend is encouraging, uncertain political support for offshore wind in European nations and the challenges of bringing down costs means that the pace of capacity growth may level off in the next two years," the Navigant report says.

In May, the DOE announced that it would provide up to $46.7 million in federal funds for the final design and construction of three pilot projects: Fisherman's Energy off the coast of New Jersey, Dominion off Virginia and Principle Power off Oregon. Two other projects, by the University of Maine and the Lake Erie Economic Development Company of Ohio, will each receive a few million in federal dollars.

While most of the 14 US offshore wind projects are slated for mid-Atlantic and Northeastern states, one is planned for each of the following states: California, Texas, Ohio and Oregon. Another is slated for the coast of Saint Thomas in the US Virgin Islands.

The US wind industry, which now has utility-scale turbines in 39 states, has seen substantial growth in the last decade, but it sputtered last year because of tax uncertainties and cheap natural gas. It's still growing but not as fast, says the American Wind Energy Association. It added a record 13,131 megawatts of power in 2012 but that fell to only 1,087 MW last year - the lowest level since 2004.