US withdraws Syria troops after IS 'defeat' 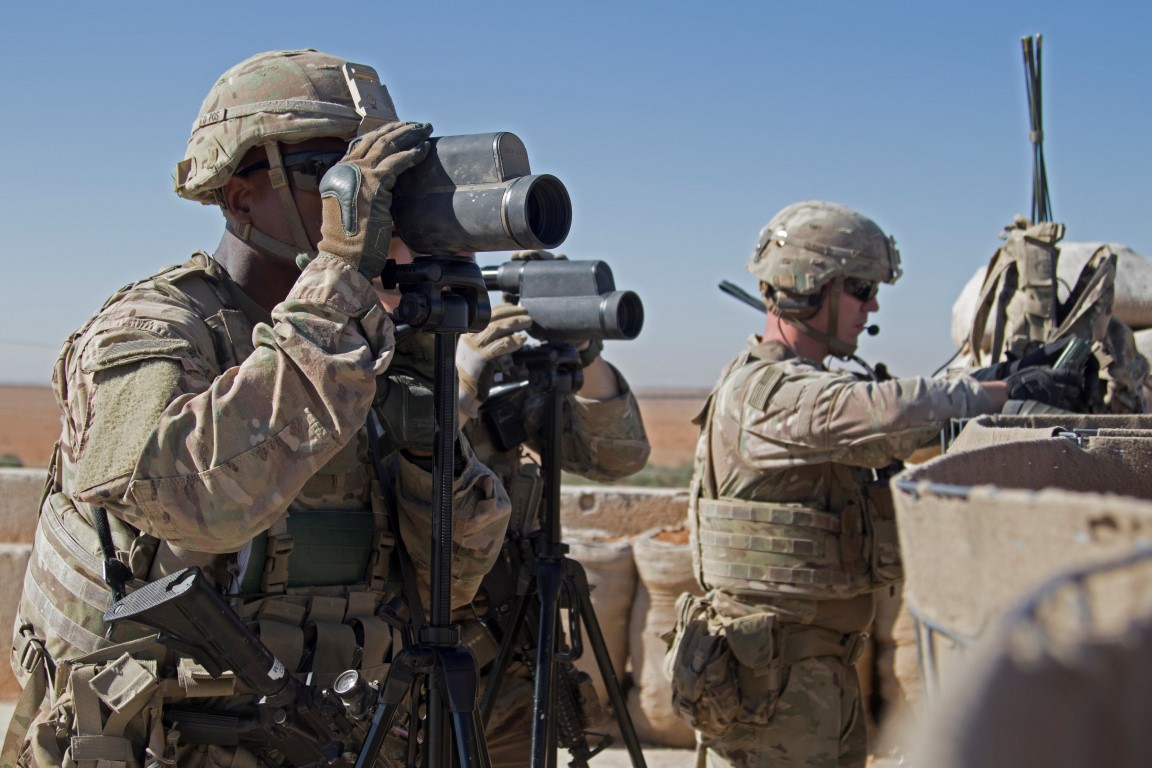 US soldiers on surveillance during a combined joint patrol in Manbij, Syria, in November. Photo: Reuters
The United States says it has begun withdrawing US forces from Syria while officials said Washington was considering removing all its troops as it winds up its campaign to retake territory once held by Islamic State.

A decision to pull out completely, if confirmed, would raise doubts about how to prevent a resurgence of the militant group, undercut US leverage in the region and undermine diplomatic efforts to end the Syrian civil war now in its eighth year.

Reports of a full US military withdrawal drew immediate criticism from some of President Donald Trump's fellow Republicans, who said leaving would strengthen the hand of Russia and Iran, which both support Syrian President Bashar al Assad.

"We have started returning United States troops home as we transition to the next phase of this campaign," White House spokeswoman Sarah Sanders said in a statement issued after President Donald Trump tweeted that "We have defeated ISIS in Syria, my only reason for being there."

We have defeated ISIS in Syria, my only reason for being there during the Trump Presidency.— Donald J. Trump (@realDonaldTrump) December 19, 2018

Trump's predecessor, Barack Obama, was slow to get involved in Syria's civil war, which has killed hundreds of thousands of people and displaced around half the country's pre-war 22 million population, fearing being dragged into another foreign war even as he sought to withdraw from Iraq and Afghanistan. But in a campaign to defeat Islamic State in Syria, Obama ordered air strikes from September 2014 and then troops in the country the following year.

It was not immediately clear from Sanders' statement whether all of the roughly 2000 US troops in the country would leave and if so, by when.

Sanders suggested that the United States would remain engaged to some degree.

"The United States and our allies stand ready to re-engage at all levels to defend American interests whenever necessary, and we will continue to work together to deny radical Islamist terrorists territory, funding, support," she said.

One US official said Washington aimed to withdraw troops within 60 to 100 days and said the US State Department was evacuating all its personnel in Syria within 24 hours.

A second US official, also speaking on condition of anonymity, said the US military was planning for a full withdrawal but said the timing could be quicker than 60-100 days.

A decision to pull out completely would upend assumptions about a longer-term US military presence in Syria, which senior US officials have advocated to help ensure Islamic State cannot reemerge.

Trump, generally wary of all US military involvement abroad, has previously voiced a strong desire to bring troops home from Syria. His tweet on Wednesday showed he saw no further grounds for remaining, even as some senior Republican lawmakers fiercely disagreed.

Republican US Senator Lindsey Graham, often a Trump ally but generally a foreign policy hawk, said a withdrawal would have "devastating consequences" for the United States in the region and throughout the world.

"An American withdrawal at this time would be a big win for ISIS, Iran, Bashar al Assad of Syria, and Russia," Graham said in a statement, using the acronym ISIS for Islamic State.

A British defence minister said he strongly disagreed with Trump that Islamic State had been defeated in Syria. Israeli Prime Minister Benjamin Netanyahu said his country would study a US decision to pull its forces from Syria and would ensure its own security. In Russia, TASS news agency quoted the Foreign Ministry as saying withdrawing US troops from Syria created prospects for a political settlement of the crisis there.

Many of the remaining US troops in Syria are special operations forces working closely with an alliance of Kurdish and Arab militias known as the Syrian Democratic Forces, or SDF.

The partnership with the SDF over the past several years has led to the defeat of Islamic State in Syria, but has also outraged NATO ally Turkey, which views Kurdish YPG forces in the alliance as an extension of a separatist militant group fighting inside Turkey. 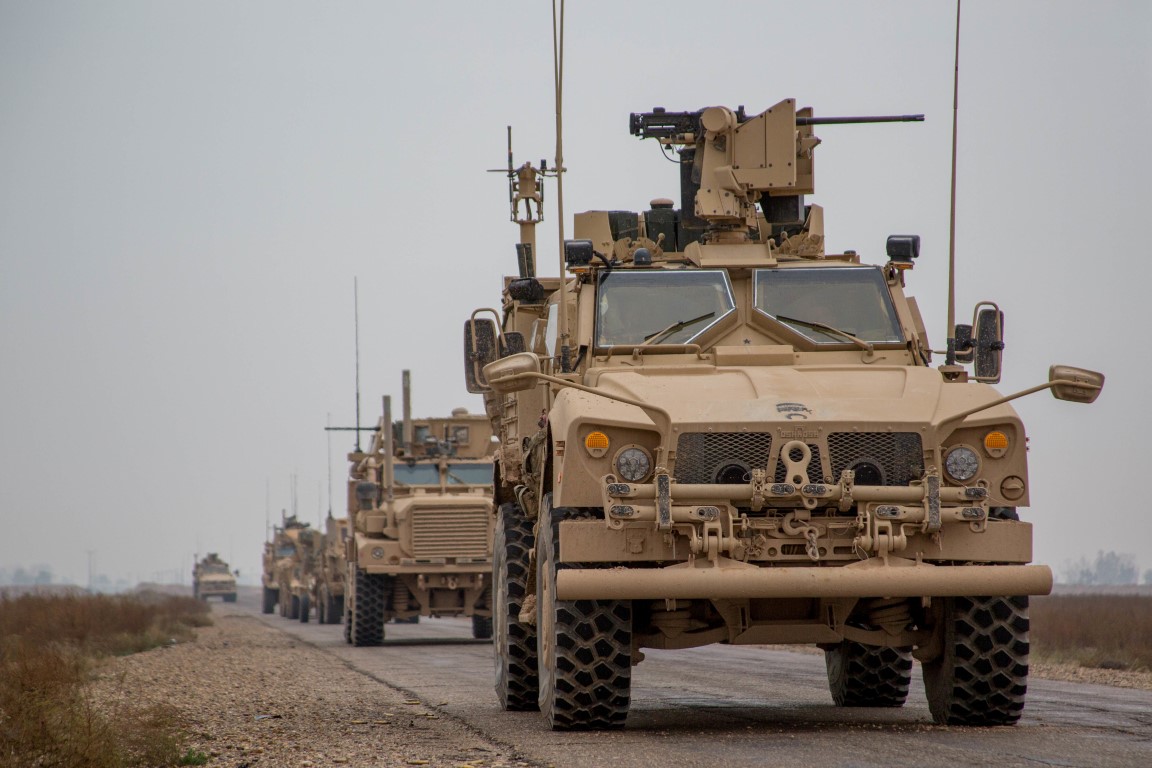 Armoured vehicles belonging to US-led coalition forces in the Middle Euphrates River Valley in Deir ez-Zor province, Syria. Photo: Reuters
The deliberations on US troops come as Ankara threatens a new offensive in Syria. To date, US forces in Syria have been seen as a stabilizing factor in the country and have somewhat restrained Turkey's actions against the SDF.

A complete withdrawal of US troops from Syria would leave a sizeable US military presence in the region, including about 5,200 troops across the border in Iraq. Much of the US campaign in Syria has been waged by warplanes flying out of Qatar and other locations in the Middle East.

Still, Defense Secretary Jim Mattis and State Department officials have long fretted about leaving Syria before a peace agreement can be reached to end the brutal civil war.

Islamic State is also widely expected to revert to guerilla tactics once it no longer holds territory. A US withdrawal could open Trump up to criticism if Islamic State reemerged.

Trump has previously lambasted Obama for the withdrawal of US forces from Iraq that preceded an unraveling of the Iraqi armed forces. Iraqi forces collapsed in the face of Islamic State's advance into the country in 2014.

A pullout would allow other countries, like Iran, to increase their influence in Syria, experts said.

"If we withdraw then who fills the vacuum, who is able to stabilize and that is the million dollar question," said Andrew Tabler, a Syria specialist at the Washington Institute for Near East Policy think-tank. "The timing is hard to understand."

Islamic State declared its so-called "caliphate" in 2014 after seizing large swathes of Syria and Iraq. The hardline Islamist group established its de facto capital in the Syrian city of Raqqa, using it as a base to plot attacks in Europe.

According to US estimates, the group oversaw about 100,000 square kilometres (39,000 square miles) of territory, with about 8 million people under Islamic State control. It had estimated revenues of nearly one billion dollars a year.

Brett McGurk, the US special envoy for the global coalition to defeat Islamic State, last week said the group was down to its last 1 percent of the territory it once held in its self-styled "caliphate." It has no remaining territory in Iraq.

Hajin, the group's last major stronghold in Syria, is close to being seized by US-backed SDF forces.

After losing Hajin, Islamic State will control a diminishing strip of territory along the eastern bank of the Euphrates River in the area where US-backed operations are focused. Militants also control some desert terrain west of the river in territory otherwise controlled by the Damascus government and its allies.

But US officials have warned that taking back the group's territory would not be the same as defeating it.

"Even as the end of the physical caliphate is clearly now coming into sight, the end of ISIS will be a much more long-term initiative," McGurk told a State Department briefing on Dec. 11.

US Marine General Joseph Dunford, the chairman of the Joint Chiefs of Staff, cautioned earlier in December that the United States had trained only about 20 percent of Syrian forces required to stabilize areas captured from Islamic State.