Venezuela's Chavez to have another operation 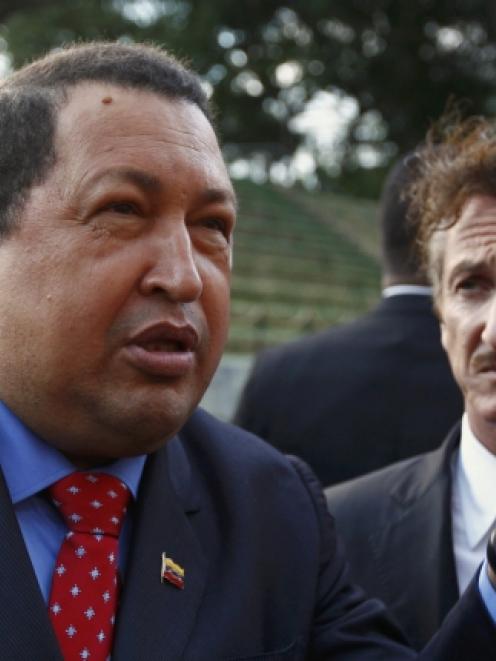 Venezuelan President Hugo Chavez welcomes US actor Sean Penn at Miraflores Palace in Caracas earlier this month. REUTERS/Jorge Silva
Venezuela's President Hugo Chavez said today he would have to undergo another operation after doctors in Cuba found a lesion in his pelvis where surgeons removed a large cancerous tumor last year.

The 57-year-old socialist leader said he had travelled to Havana for the tests on Saturday. Rumors of the unannounced trip had prompted a flood of speculation among the opposition and supporters that he was at death's door.

"There is no metastasis. Just this small lesion in the same place where they removed the tumor," Chavez said during a televised tour of a factory in his home state of Barinas.

"Because of the growing rumors, I'm obliged to put forward the information now ... it's a small lesion, about 2 cm across, very clearly visible. This will need to be taken out, it needs more surgery, supposedly less complicated than before."

Donning a bright red hard hat to stroll around the proposed site of the Veneminsk factory, Chavez had joked with workers and looked to be in reasonable health. He did not say when the next operation was due to take place.

His information minister had earlier denounced the report that Chavez was back in Havana for emergency treatment as part of a "dirty war by scum," launched by the opposition ahead of the Oct. 7 election.

A prominent opposition-leaning Venezuelan journalist, Nelson Bocaranda, wrote on Monday that Chavez, who had two operations in Havana last June, had returned unexpectedly to Cuba and that some of his relatives were flying there too.

Chavez has insisted he is completely recovered, although medical experts say it is too soon to make such a call.

Chavez's health is the wildcard in the run-up to the election, when he will seek a new six-year term.

The opposition is newly united behind one candidate - youthful state governor Henrique Capriles - and see the vote as their best chance to end Chavez's 13 years in power.

Recent opinion polls have given Chavez an edge over Capriles, thanks partly to a huge programme of new state spending on social projects. But about a third of Venezuelans remain undecided, and competition for their votes will be intense.