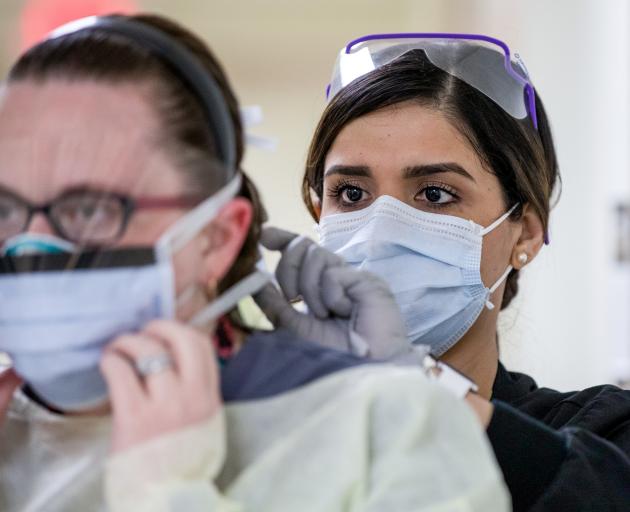 Dr Anthony Fauci, director of the National Institute of Allergy and Infectious Diseases, estimated in an interview with CNN that the pandemic could cause between 100,000 and 200,000 deaths in the United States.

The US coronavirus death toll topped 2400 on Sunday, after deaths on Saturday more than doubled from the level two days prior. The United States has now recorded more than 137,000 cases of COVID-19, the disease caused by the virus, the most of any country in the world.

Jason Brown, who was laid off from his job in digital media due to the pandemic, said Fauci's estimate was scary.

"I feel like it's just growing, growing, growing," said Brown, who is 27 and lives in Los Angeles, one of the epicenters of the outbreak. "There's no vaccine. It seems like a lot of people don't take it seriously in the US so it makes me believe that this would become more drastic and drastic."

Erika Andrade, a teacher who lives in Trumbull, Connecticut, said she was already expecting widespread deaths from the virus before Fauci's estimate on Sunday.

"I wasn't surprised that he said the numbers were coming. They were lower than what I actually expected," said Andrade (49). "I'm worried for my mother. I'm worried for the people I love."

In New York, the usually bustling city was quiet except for the sound of ambulance sirens.

"It feels very apocalyptic," said 27-year-old Quentin Hill, of New York City, who works for a Jewish nonprofit. "It almost feels like we're in wartime."

New York state reported nearly 60,000 cases and a total of 965 deaths on Sunday, up 237 in the past 24 hours with one person dying in the state every six minutes. The number of patients hospitalised is slowing, doubling every six days instead of every four, Governor Andrew Cuomo said.

Stephanie Garrido  (36), a tech worker from Manhattan, said she has not left her home in 15 days, receiving her groceries by delivery. Too many New Yorkers have underestimated the aggressiveness of the virus as many people continue to socialise and congregate, Garrido said.

"Those people are in denial or just don't think it will affect them. It's extremely inconsiderate," Garrido said. "People need to consider that this will be much longer term."

The governors of at least 21 states, representing more than half the US population of 330 million, have told residents to stay home and closed non-essential businesses.

Maryland arrested a man who repeatedly violated the ban on large gatherings by hosting a bonfire party with 60 guests, Governor Larry Hogan said on Sunday.

One bright spot on Sunday was Florida reporting about 200 more cases but no new deaths, with its toll staying at 56.

President Donald Trump has talked about reopening the country by Easter Sunday, April 12, despite many states such as New York ordering residents to stay home past that date. On Saturday, he seemed to play down those expectations, saying only "We'll see what happens."

Tests to track the disease's progress also remain in short supply, despite repeated White House promises that they would be widely available.

Trump bragged on Twitter about the millions of Americans tuning in to watch his daily briefings.

Michigan Governor Gretchen Whitmer, whose state has become one the fastest growing areas for the virus, especially in the county that includes Detroit, called the rapid spread "gut-wrenching."

"We have nurses wearing the same mask from the beginning of their shift until the end, masks that are supposed to for one patient at one point in your shift. We need some assistance and we're going to need thousands of ventilators," Whitmer told CNN.

Ventilators are breathing machines needed by many of those suffering from the pneumonia-like respiratory ailment and many hospitals fear they will not have enough.

Dr. Arabia Mollette, an emergency medicine physician at Brookdale and St. Barnabas Hospital in the Bronx, say she now works in a "medical warzone."