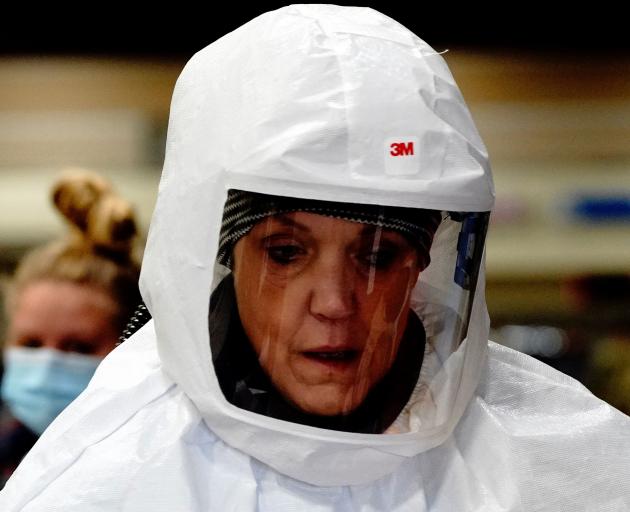 Nurse Deb Grabo, wearing a powered air purifying respirator hood, prepares to begin her shift at a drive-through testing site in Bismarck, North Dakota. Photo: Reuters
The United States, Russia, France and many other countries are setting records for coronavirus infections as a tidal wave of cases washes over parts of the Northern Hemisphere, forcing some countries to impose new curbs.

More than 43 million people are reported to have been infected by the coronavirus globally and 1.15 million have died, according to a Reuters tally. The US has the highest number of deaths and infections.

Word that a vaccine being developed by the University of Oxford and AstraZeneca Plc produced immune responses in both elderly and young people offered some positive news as autumn turns to winter in northern countries and more people socialise indoors.

But British Health Secretary Matt Hancock cautioned that the vaccine would not be widely available until next year and said, "We're not there yet".

Any vaccine faces both scientific and public relations hurdles. Surveys have shown only about half of Americans would get a Covid-19 vaccination due to concerns about safety, effectiveness and the approval process.

In the United States, the number of hospitalized Covid-19 patients is at a two-month high, straining health care systems in some states.

US President Donald Trump, facing a tough re-election battle on Nov. 3, lashed out again at reports that the coronavirus is surging.

He repeated his unfounded claim that Covid-19 cases are rising because there is more testing, an assertion not supported by data and one that has been rejected by health experts.

"Cases up because we TEST, TEST, TEST. A Fake News Media Conspiracy. Many young people who heal very fast. 99.9%. Corrupt Media conspiracy at all time high," Trump said in a Twitter post.

The number of new Covid-19 cases in the United States last week rose 24% while the number of tests performed rose 5.5%, according to a Reuters analysis.

In Europe, the picture was unrelentingly grim as a string of countries reported record increases, led by France, which posted more than 50,000 daily cases for the first time on Sunday, while the continent passed the threshold of 250,000 deaths.

France may even be experiencing 100,000 new infections a day, professor Jean-François Delfraissy, who heads a council that advises the government, told RTL radio.

Governments have been desperate to avoid the lockdowns which curbed the disease earlier in the year at the cost of shutting down their entire economies. But the steady rise in new cases has forced many in Europe to tighten curbs.

"We are facing very, very difficult months ahead," German Chancellor Angela Merkel told a meeting of leaders from her Christian Democrat party, according to daily Bild.

She plans "lockdown light" that will focus on closing bars, restaurants and public events, the newspaper said.

The Spanish government faced a backlash over its plans to put one of Europe's worst Covid-19 hot spots under a six-month state of emergency. Opposition parties said six months was too long, epidemiologists said this may be too little too late and some citizens balked at nightly curfews.

Russia's daily tally of new Covid-19 infections surged to a record high of 17,347 on Monday as the Kremlin warned the pandemic was beginning to take a greater toll outside Moscow.

Russia in August became the first country to grant regulatory approval for a vaccine against Covid-19 after less than two months of human testing, raising eyebrows among sceptical scientists in the West. Regulators approved a second vaccine earlier this month.

With 1.5 million infections, the country of around 145 million people has recorded the world's fourth largest Covid-19 case load - after the United States, India and Brazil.

Italy, the country worst hit in the early stages of the crisis in March, imposed new restrictions, ordering restaurants and bars to close from 6pm shutting cinemas and gyms and imposing local curfews in several regions.

Britain announced wider coronavirus restrictions on Monday which will take the number of people under England's highest category of alert to nearly 8 million, as the government battles a sharp rise in cases.

The number of new Covid cases has risen by almost a quarter over the past week to 153,483, and new COVID deaths were 50% higher than the week before at 1,272, taking fatalities over the course of the pandemic to 44,998, the highest in Europe.

From 12.01am on Tuesday Warrington in northwest England will be classified as the highest Tier 3 alert level, Britain's health ministry said.

Local authorities in Nottingham in central England and three nearby towns said they would have similar restrictions from Thursday, the first areas outside northern England to do this.

Under these curbs, people from different households are no longer allowed to socialise outdoors, adding to an existing ban on indoor socialising in much of England, while pubs and bars that do not serve food must shut.

More than 7 million people across northern England, including major cities such as Manchester, Liverpool and Sheffield, are already under these restrictions.

Schools, shops and restaurants in England are allowed to stay open, unlike the first lockdown in March and April.

Other parts of the United Kingdom have imposed stricter curbs than Britain's central government, which only has direct control over health policy in England.

Wales has shut all non-essential retailers, pubs and restaurants in a 17-day lockdown which began on Friday, and Scotland has severe curbs on hospitality across most of the country.

Pubs, restaurants and hairdressers are also closed in Northern Ireland until November 13.