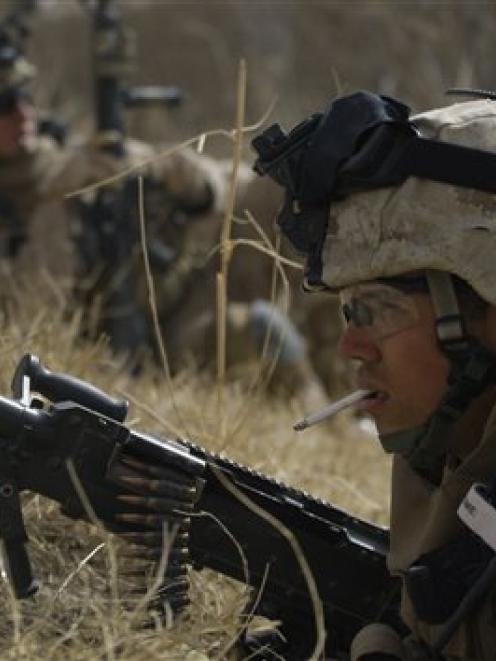 US Marines from 3rd Battalion, 6th Marine Regiment take cover during a firefight as Taliban snipers fire on their position in Marjah (AP Photo/David Guttenfelder)
Twelve Afghans died yesterday when two rockets fired at insurgents missed their target and struck a house during the second day of NATO's most ambitious effort yet to break the militants' grip on the country's dangerous south.

In the town of Marjah, the focal point of the operation, Marines and Afghan troops battled through sniper fire and an afternoon sandstorm that cut down their visibility to a few feet.

They tried to advance through the town, clearing houses one-by-one of explosives. But gunfire forced them numerous times to take cover in drab mudbrick compounds that they hadn't yet cleared of booby-traps. To the north, US Army troops fought skirmishes with Taliban fighters, calling in a Cobra attack helicopter against the insurgents.

The civilian deaths were a blow to NATO and the Afghan government's attempts to win the allegiance of Afghans and get them to turn away from the insurgents.

"We deeply regret this tragic loss of life," said Gen. Stanley McChrystal, the top commander in Afghanistan. "The current operation in central Helmand is aimed at restoring security and stability to this vital area of Afghanistan. It's regrettable that in the course of our joint efforts, innocent lives were lost."

McChrystal said he had apologised to Afghan President Hamid Karzai for the accident and had suspended use of the rocket system until the incident can be reviewed.

Karzai ordered an investigation into who fired the rocket. Before the offensive began on Saturday, Karzai pleaded with Afghan and foreign military leaders to be "seriously careful for the safety of civilians."

NATO said one service member was killed in a bombing in southern Afghanistan but it was unrelated to the offensive in Marjah.

Coalition forces have so far had two casualties in the offensive - an American and a Briton. Afghan officials said at least 27 insurgents have been killed in the operation.

The offensive, called "Moshtarak," or "Together," is the biggest joint operation since the 2001 U.S.-led invasion of Afghanistan, with 15,000 troops involved, including some 7,500 in Marjah itself. Most of the NATO forces taking part are American or British. Between 400 and 1,000 insurgents - including more than 100 foreign fighters - were believed to be holed up in Marjah.

It could take weeks to completely reclaim Marjah, according to Brig. Gen. Larry Nicholson, a top Marine commander in the south.

"That doesn't necessarily mean an intense gun battle, but it probably will be 30 days of clearing," Nicholson said. "I am more than cautiously optimistic that we will get it done before that."

Sniper fire forced Nicholson to duck behind an earthen bank in the northern part of the town where he toured the tip of the Marines' front line held by Lima Company, 3rd Battalion, 6th Marines.

"The fire we just took reflects how I think this will go - small pockets of sporadic fighting by small groups of very mobile individuals," he said.

Marine spokesman Capt. Abraham Sipe said troops are meeting "light to moderate" resistance. "There are some areas where the enemy has chosen to stand and fight," he said.

The stepped-up fighting forced Marines to storm houses and residential compounds that had not been cleared of explosives.

"That does make it more difficult, but we can't let fear paralyze our actions," said Capt. Joshua Winfrey of Stillwater, Oklahoma, a Marine company commander.

Marines and Afghan troops used metal detectors and sniffer dogs, searching compound-to-compound for explosives rigged to explode. Blasts from controlled detonations could be heard about every 10 minutes north of the town.

To the north, a Cobra attack helicopter unleashed a Hellfire missile at a building where insurgents were believed holed up after Taliban fire pinned down a patrol for about 45 minutes.

Afghan and international troops want to secure the area, set up a local government and rush in development aid in what is seen as the first test of the new NATO strategy for turning the tide of the 8-year-old war.

NATO forces uncovered 250kg of ammonium nitrate and other bomb-making materials in a compound in Marjah as well as a weapons cache in Nad Ali, which lies to the north.

The United Nations said an estimated 900 families had fled the Marjah area and were registered for emergency assistance in the provincial capital of Lashkar Gah, about 20 miles (32 kilometers) away.

NATO said several shuras, or council meetings, have been held with residents in Nad Ali and Marjah, with more planned as part of a larger strategy to enlist community support for the mission.

In one village, Qari Sahib, Afghan officials met with residents promising to pave a road and build a school and a clinic. In exchange, they urged the villagers to renounce the Taliban and push militants to reintegrate into society. To show good faith, a resident who had been arrested for alleged militant activity was freed.

"Until now, there was no security," said villager Mohammad Ebrahim. "We want them to build us schools and the road. So far they haven't done anything for us. Now it is time to work and they have promised to do that."