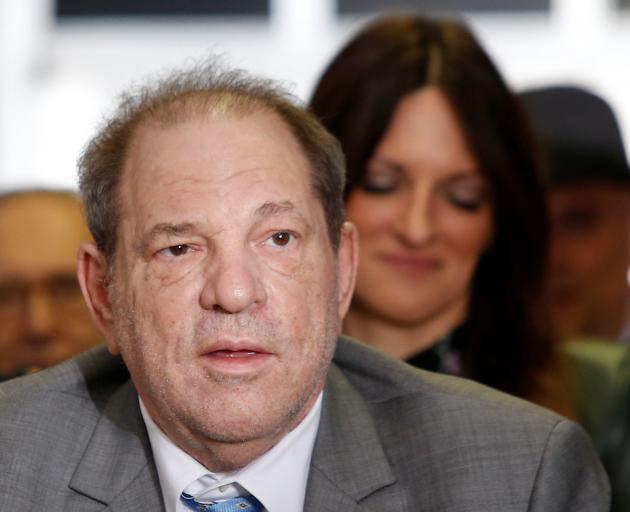 The producer of Shakespeare in Love and The English Patient has pleaded not guilty to raping Jessica Mann, a one-time aspiring actress, and sexually assaulting former production assistant Mimi Haleyi.

He faces life in prison if convicted of the most serious charge, predatory sexual assault.

In addition to the New York case, Weinstein was charged in Los Angeles on January 6, the first day of his Manhattan trial, with sexually assaulting two women.

Weinstein is expected to appear in a Los Angeles court to hear the charges regardless of the New York trial's outcome, a spokesman for Los Angeles District Attorney Jackie Lacey told Reuters.

No date has been set for that appearance.

The 67-year-old faces up to 28 years in prison if convicted on the Los Angeles charges. He has said any sexual encounters he had were consensual.

In California, Weinstein is accused of attacking two women on consecutive nights in 2013. One unidentified woman was allegedly raped.

The second woman, model and actress Lauren Young, testified in the New York trial that she was trapped in a bathroom by Weinstein, who groped her while he masturbated.

Young’s claims are not part of the criminal charges against Weinstein in New York. She is one of three women who prosecutors called as witnesses to bolster their case against the former producer by trying to provide evidence of his motives or methods.

Young testified that social media influencer Claudia Salinas stood outside the bathroom door during the attack, which Salinas flatly denied when she was called by the defence.

In addition to the criminal cases, Weinstein is facing civil lawsuits filed by dozens of women for various allegations of sexual harassment or assault.

Many lawsuits also named as defendants The Weinstein Company film studio he founded with his brother Robert. The lawsuits said the company condoned and facilitated the abuse, which it has denied.

A lawyer for Robert Weinstein did not respond to a request for comment.

The company filed for bankruptcy protection and sold its operations in 2018.

Lawyers for many of the women as well as creditors of the company, former board members and insurers have reached a proposed civil settlement worth around $US47 million ($NZ73 million). About $US25 million is expected to be available for compensating women who alleged abuse, according to a report by the New York Times.

The agreement would need court approval.

The parties have been trying to finalise the proposed settlement for more than six months. Beth Fegan, the civil lawsuit's lead lawyer, said in an email to Reuters she expects "to have news by the end of the month."

Lawyers for seven women, including actress Rose McGowan, who has said she was raped by Weinstein, told Reuters they intend to oppose the settlement.

Several accusers criticised the settlement as low, while also acknowledging the statute of limitations for allegations such as workplace sexual harassment often requires a woman to take action within two years or less.

Many alleged incidents happened many years ago, making it difficult to sue, and judges have dismissed claims against board members.

Lawyer Jeff Herman said he hoped women would feel a measure of justice with the criminal trial of Weinstein, regardless of the outcome.

The proposed settlement has the support of Herman's client, actress Kadian Noble, who accused Weinstein of sexually assaulting her.