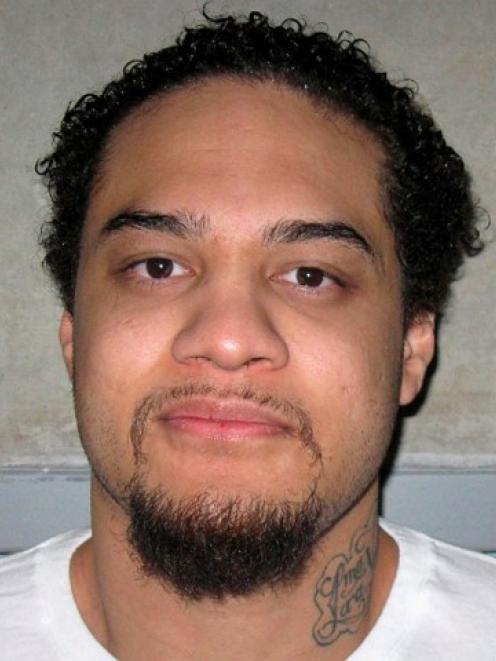 A Utah Department of Corrections photo of Siale Angilau. REUTERS
The defendant in a long-running gang case in Salt Lake City was shot by US marshals when he attempted to attack a witness testifying at his trial, a spokeswoman for the US Attorney's Office says.

Melodie Rydalch, a spokeswoman for the US Attorney's Office, told the Los Angeles Times that the shooting was related to the trial of Siale Angilau, an alleged member of the Tongan Crips. She described the case as "a long-running RICO" case involving the group.

The Associated Press, quoting the FBI, said that Angilau died on Monday (local time) at a hospital. He had been shot in the chest.

The case was being heard before US District Judge Tena Campbell, who declared a mistrial.

The trial had just begun on Monday when Angilau attacked, according to the order signed by Campbell.

"Angilau apparently rushed and attacked a cooperating witness and was shot several times by law enforcement in front of the court and the Jury," the judge wrote.

After the shooting, a group of marshals continued to hold Angilau at gunpoint near the jury box.

"The court has met with the jury and observed that most of the jury members are visibly shaken and upset by this episode," the judge wrote, adding: "The court finds that this occurrence in the courtroom would so prejudice Mr. Angilau as to deprive him of a fair trial. The court hereby declares a mistrial."

In a later statement, the US Marshals Service confirmed that a shooting took place inside a courtroom in the Salt Lake City federal courthouse.

"A deputy US marshal fired his weapon in response to a threat during trial proceedings. One person was injured and has been transported for medical attention. There were no injuries to members of the judiciary or law enforcement. The courthouse is secure. Indications are that no weapons were secreted into the courthouse," the agency stated.

Salt Lake City police said they were called to the downtown US District Court building about 9:45 a.m.

Angilau was among 17 members and associates of the group indicted on racketeering charges. Prosecutors allege the group was a criminal enterprise responsible for robberies and some murders.

The new federal courthouse building has been open for a week. Angilau's trial was the first in the new building.