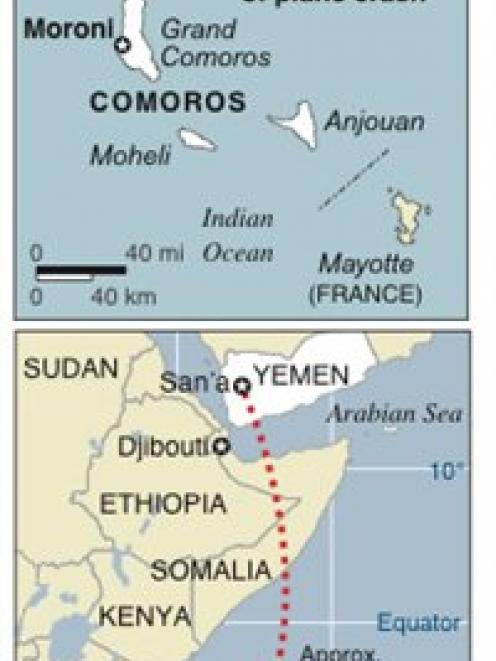 A Yemeni jetliner carrying 153 people crashed in the Indian Ocean as it came in for a landing during howling winds on the island nation of Comoros. Yemeni officials said a teenage girl survived.

The crash came two years after aviation officials reported faults with the plane, an Airbus 310 flying the last leg of a journey from Paris and Marseille to Comoros, with a stop in Yemen to change planes. Most of the passengers were from Comoros, a former French colony. Sixty-six on board were French nationals.

Khaled el-Kaei, the head of Yemenia airline's public relations office, said a 14-year-old girl survived the crash. And Yemen's embassy in Washington issued a statement saying a young girl survived and was taken to a hospital. It also said five bodies were recovered.

There were earlier reports that a 5-year-old boy survived. El-Kaei said that was not known and the airline had lost contact with its office in Comoros because of bad weather.

Yemeni civil aviation deputy chief Mohammed Abdul Qader said the flight data recorder had not been found and it was too early to speculate on the cause of the crash. But he said the wind was 40 miles per hour (61 kph) as the plane was landing in the middle of the night.

The Yemenia plane was the second Airbus to crash into the sea this month. An Air France Airbus A330-200 crashed into the Atlantic Ocean on June 1, killing all 228 people on board, as it flew from Rio de Janeiro to Paris.

The Comoros is an archipelago of three main islands situated 1,800 miles (2,900 kilometers) south of Yemen, between Africa's southeastern coast and the island of Madagascar. It is a former French colony of 700,000 people.

In France, school vacations began this week and many on the plane were heading home to visit.

Gen. Bruno de Bourdoncle de Saint-Salvy, the senior commander for French forces in the southern Indian Ocean, said the Airbus 310 crashed in deep waters about 9 miles (14.5 kilometers) north of the Comoran coast and 21 miles (34 kilometers) from the Moroni airport.

French aviation inspectors found a "number of faults" during a 2007 inspection of the plane that went down, French Transport Minister Dominique Bussereau said on i-Tele television Tuesday.

In Brussels, EU Transport Commissioner Antonio Tajani said the airline had previously met EU safety checks and was not on the bloc's blacklist. But he said a full investigation was now being started amid questions why passengers were put on another jet in the Yemeni capital of San'a.

An Airbus statement said the plane that crashed went into service 19 years ago, in 1990, and had accumulated 51,900 flight hours. It has been operated by Yemenia since 1999. Airbus said it was sending a team of specialists to the Comoros.

A crisis center was set up at Charles de Gaulle airport in Paris. Many passengers were from the French city of Marseille, home to around 80,000 immigrant Comorans, more even than Comoros' capital of Moroni.

Some French Comorans insisted that their earlier warnings about the airline's safety weren't heeded by authorities.

"This A310 is a plane that has posed problems for a long time, it is absolutely inadmissible that this airline Yemenia played with the lives of its passengers this way," he said.

"Some people stand the whole way to Moroni," said Mohamed Ali, a Comoran who went to Yemenia's headquarters in Paris to try to get more information.

Thoue Djoumbe, a 28-year-old woman who lives in the French town of Fontainebleau, said she and others had complained about the airline for years.

"It's a lottery when you travel to Comoros," said Djoumbe. "We've organized boycotts, we've told the Comoran community not to fly on Yemenia airways because they make a lot of money off of us and meanwhile the conditions on the planes are disastrous."

Christophe Prazuck, French military spokesman, said a patrol boat and reconnaissance ship were being sent to the crash site as well a military transport plane. The French were sending divers as well as medical personnel, he said.

French President Nicolas Sarkozy "expressed his deep emotion" about the crash and asked the French military to help in the rescue operation, particularly from the French islands of Mayotte and Reunion.

Yemenia airline officials say the 11-member crew was made up of six Yemenis, including the pilot, two Moroccans, one Indonesian, one Ethiopian and 1 Filipino. They spoke on condition of anonymity because they were not authorized to speak to the media.