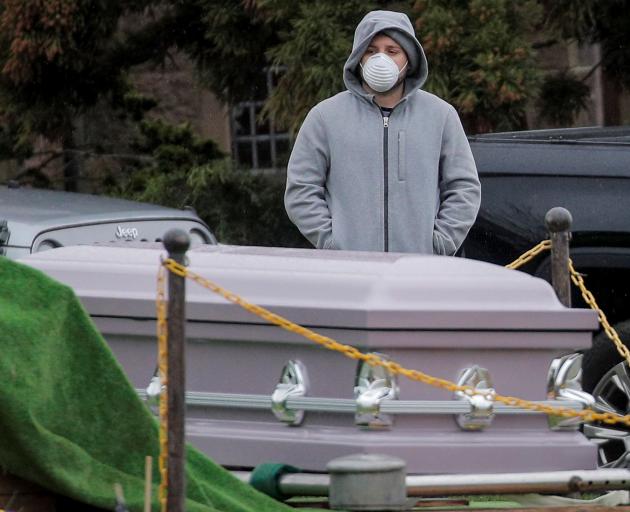 A mourner attends a funeral in Brooklyn, New York. Photo: Reuters
Americans must persevere with social distancing now that their efforts are showing signs of slowing the spread of coronavirus, US medical and state officials warn, as New York hospitalisations ebbed while the state's death toll spiked again.

New York Governor Andrew Cuomo said new cases in hospitals fell to a fresh low of 200 in a sign that the disease's curve was flattening in the state, the epicentre of the US outbreak. But at the same time, the state recorded a record-high 799 deaths on Wednesday, for a total of 7067.

"You can’t relax. The flattening of the curve last night happened because of what we did yesterday," Cuomo said, referring to the shape of graphs tracking new cases.

Several officials have hailed the apparent success of mitigation efforts as reflected in death projections that have been scaled down to 60,000 from more than 100,000. Still, Anthony Fauci, the nation's top US infectious disease expert, said it was important that people continue to stay home.

"We've got to continue to redouble our efforts at the mitigation of physical separation in order to keep those numbers down and hopefully even get them lower than what you've heard recently," Fauci, director of the National Institute of Allergy and Infectious Diseases, said on CBS This Morning.

A University of Washington model often cited by US and state officials projects that COVID-19, the respiratory ailment caused by coronavirus, will claim 60,415 American lives by August 4, with the peak coming on Easter Sunday this weekend, when it projects that 2212 will die.

Cuomo likened the crisis to the September 11, 2001, attacks on the United States, which killed almost 3,000 people mostly at the World Trade Center in New York, and called it a "silent explosion."

"9/11 was so devastating, so tragic and then in many ways we lose so many more New Yorkers to this silent killer," he said. "It was a silent explosion that just ripples through society with the same randomness, the same evil that we saw on 9/11."

Stay-at-home orders that have closed non-essential workplaces in 42 states have drastically slowed the once-humming US economy and thrown millions of people out of work.

With several state unemployment insurance offices deluged in recent weeks, 6.6 million workers applied for jobless benefits in the week ended April 4, the US Labor Department said on Thursday. That followed 6.9 million jobless applications the week before, the most since the Great Recession of 2008.

In all, some 16.8 million American workers have applied for jobless benefits in the past three weeks.

US deaths due to coronavirus topped 16,000 on Thursday, according to a Reuters tally, a number surpassed only by Italy with a much smaller population. More than 450,000 US residents had tested positive for the virus.

Veteran doctors and nurses have voiced astonishment at the speed with which some coronavirus patients were deteriorating and dying.

Patients "look fine, feel fine, then you turn around and they're unresponsive," said Diana Torres, a nurse at Mount Sinai Hospital in New York City, the center of the nation's worst outbreak.

Meanwhile small businesses and workers, particularly in the service industries, have been bearing the brunt of the devastating effect on the economy of the pandemic lockdown measures.

Outside Grand Rapids, Michigan, 22-year-old Jocelyn Ockerse, recently lost her job as a hairdresser while her husband, a drivers' education instructor, also is out of work. Neither has been approved for unemployment benefits.

"We are struggling mentally and financially but if further restrictions slow this thing down and help save lives, then I’m all for it,” Ockerse told Reuters through Twitter messages. Keith Howard, 60, said he has been relying on the local food bank and waiting for his unemployment benefits to arrive since he was laid off last month from his job as a cleaner at Chatham University in Pittsburgh, Pennsylvania.

"The only thing I can do is go about it one day at a time," Howard told Reuters by phone.

Members of US President Donald Trump's economic team have been bullish on re-opening of the economy, however.

Asked on CNBC on Thursday whether he believed the US economy could be reopened as soon as next month, Treasury Secretary Steven Mnuchin said, "I do." As soon as Trump "feels comfortable with the medical issues," he said.

The federal government was doing everything necessary to ensure "that American companies and American workers can be open for business and that they have the liquidity that they need to operate their business in the interim,” Mnuchin said.