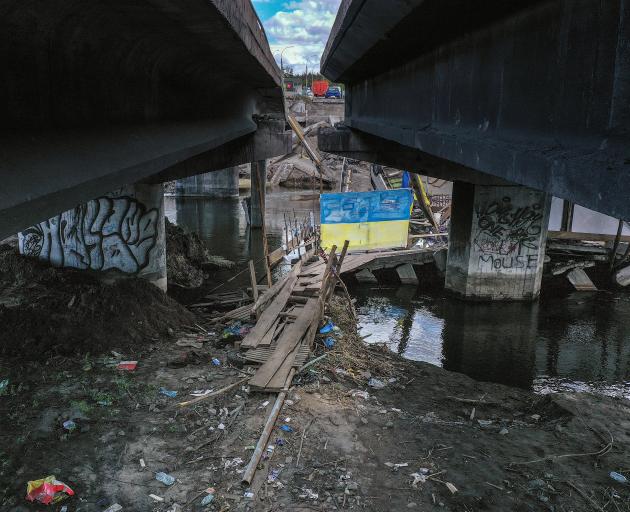 The remains of the bridge over the Irpin River where thousands of residents made their precarious escape from the Russian invasion. PHOTO: GETTY IMAGES
The tragic alliance of church and state is examined by  Prof Murray Rae.

One of the great prophetic visions of the Old Testament portrays the God of Israel judging between the nations. In the prophet Isaiah’s version of this judgement, "they shall beat their swords into ploughshares, and their spears into pruning-hooks; nation shall not lift up sword against nation, neither shall they learn war any more" (Isaiah 2:4). It is a vision not yet realised. But it is one that we ought to strive for with all the means at our disposal, except, of course, the military means which are precisely the object of the prophet’s denunciation.

War is a terrible thing. We watch in dismay at the destruction being wrought in Ukraine.

Moral categories are not always precise in their application but I think, in the case of Russia’s invasion of Ukraine, we can recognise and name evil when we see it. Or so I would like to think.

Tragically, however, Russia’s most high-ranking church figure does not recognise the evil in the present situation, or fails to perceive where it is truly present. Archbishop Kirill, who is the head of the Russian Orthodox Church, is a close ally of Vladimir Putin, described Putin’s election victory in 2012 as "a miracle of God", and has been a vocal supporter of Russia’s invasion of Ukraine.

Church leaders the world over, including many from the Russian Orthodox tradition itself, have condemned Kirill’s support for the war. Pope Francis has met with Kirill and has urged him to renounce the evil being done in Ukraine. Almost 300 of Kirill’s own priests and deacons have signed an open letter condemning the war. The former Archbishop of Canterbury, Rowan Williams, has also condemned the war and commented with regard to Kirill’s justifications of it that he could not accept the use of Christian terminology to justify "a nakedly aggressive, unprincipled act of violence against a neighbouring Christian nation".

Archbishop Leo of Helsinki has declared that, "Now is the high time for the Church in Russia to realise that it has gone astray." Addressing his remarks directly to Kirill, Leo continued, "For Christ’s sake, wake up and condemn this evil."

The Christian Church has been here before. In 1934 a group of pastors and theologians in Germany drafted the Barmen Declaration condemning the support that many Christians were willing to offer Adolf Hitler’s Nazi regime. Karl Barth, the principal author of the Declaration, had been appalled when in 1914, 93 German intellectuals including some of his former theological professors signed a letter in support of the Kaiser’s war policy of aggression against Belgium and France.

In 1982 the World Alliance of Reformed Churches declared apartheid to be a heresy and suspended the membership of two of its South African member churches who supported the government policy. Heresy is not a very popular concept in the present age, but there are times when the Christian Church needs to declare unequivocally that things being said and done in the name of the Church or otherwise endorsed by the Church are fundamentally and plainly in conflict with the gospel of Jesus Christ.

One of the inducements to heresy, I suggest, is too close an alliance between the Church and the interests of a particular people — a nation or a race, for example — to the exclusion of other people. In Hitler’s Germany, for instance, many Christians accepted Hitler’s assertion of the superiority of the Aryan race and were willing to believe that German ascendancy aligned with the purposes of God. The Dutch Reformed Church in South Africa tried to offer theological justifications for apartheid, and now Patriarch Kirill in Russia willingly colludes with Putin’s "Russian world" ideology and with Putin’s perception of the Russian Orthodox Church as a symbol of Russian nationhood.

In New Zealand, we are fortunate that there is a clear separation between church and state. New Zealand was established as a "secular" nation, not because those responsible for establishing it as such wanted to exclude God from the public square, but rather because they saw, wisely in my view, the dangers of too close an alliance between church and state. An established church is a danger to the church itself for it can too easily confuse the interests of a particular nation with its own interests. And it is a danger to the state which can too readily suppose that it has the church’s and also divine endorsement for whatever projects it seeks to pursue.

We see both dangers tragically playing out in the dead bodies strewn upon the streets of Mariupol.

The Christian Church has reason again to declare unequivocally that this atrocity perpetrated by President Putin and supported by Archbishop Kirill is fundamentally and plainly in conflict with the gospel of Jesus Christ, and a betrayal of the biblical hope that under God’s right ordering of things "nation shall not lift up sword against nation, neither shall they learn war any more".

--  Murray Rae is Professor of Theology at the University of Otago.