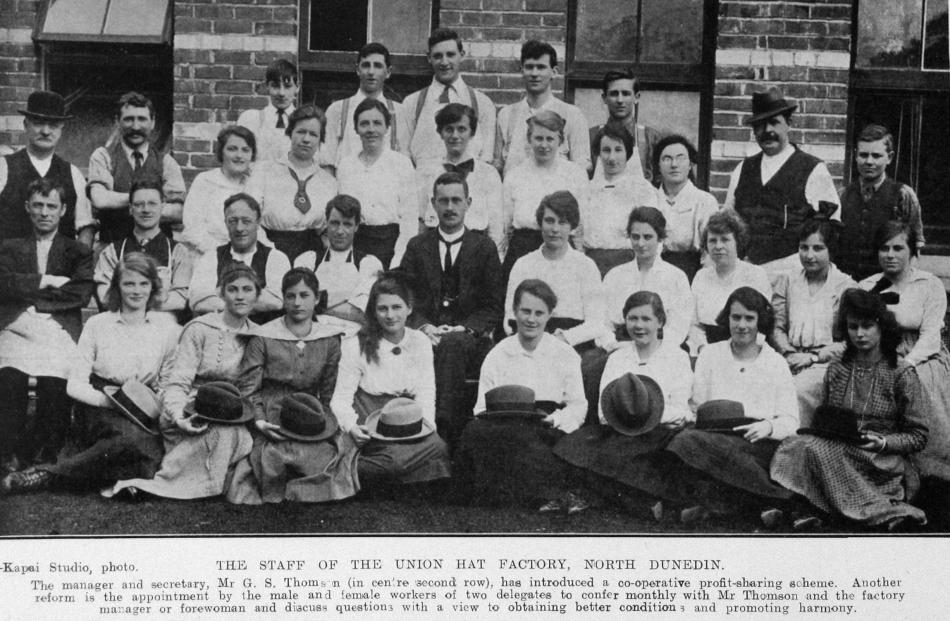 The staff of the Union Hat Factory, North Dunedin. The manager and secretary, Mr G. S. Thomson (centre, second row) has introduced a co-operative profit-sharing scheme. Another reform is the appointment by the male and female workers of two delegates to confer monthly with Mr Thomson and the factory manager or forewoman and discuss questions with a view to obtaining better conditions and promoting harmony. — Otago Witness, 19.9.1919.
Recidivism and heredity

The Prisons Board has on a former occasion indicated that there are two classes of offenders which merit special attention (states the annual report of the Prisons Board). We allude to the petty offenders who have a large number of convictions recorded against them, such as vagrants and prostitutes. They are continually going in and out of gaol and serving short sentences, and Section 30, Sub-section (1) of the Crimes Act, 1908, is rarely applied to them. For habitual offenders of this sort, especially females, there should be a reformatory designed primarily for their detention and treatment, but unfortunately we have no such institution. A small farm in the country, where they could be segregated and taught intensive culture, would suit this purpose admirably. Unless they were released on probation, the period of their detention should not be less than four years. There are some offenders of this class who have as many as 50 convictions recorded against them, and up to the present reformation has been impossible. The board very strongly recommends that this suggestion be given earnest consideration, as a small farm would no doubt prove of invaluable assistance.

Aeroplanes are becoming a very common sight all along the eastern districts of Australia and particularly in Victoria and New South Wales. Flights from Melbourne to Sydney are becoming so frequent as hardly to be worthy of mention. There are quite a number of organisations already in existence in New South Wales and Victoria for the purpose of ``commercialising'' flying, but although various ambitious programmes have been announced, nothing much seems to have been done, except the survey of a proposed route from Sydney to Darwin. It appears that all these schemes are being more or less held up by the Government's failure to assist in the development of aviation. No ship may sail or motor car turn a wheel on public road without official permission; but, so far, the Government does not seem even to have thought of producing some sort of regulations to govern flying. The Government will perhaps wake up when pioneers of regular inter-continental services are already here.

It was at the end of October, as far back as 1916, that Mr G. Cook caused a great deal of excitement amongst the fraternity by forwarding to the Southland Acclimatisation Society a fish of a species unknown, caught in the Waiau River (says the Southland Times). The interest deepened when various local authorities declared that the fish, which weighed 7lb, was a member of the true Atlantic salmon (Salmo salar) family. The Atlantic salmon should not be confused with the quinnat salmon, caught in northern rivers. The Atlantic is recognised as a greatly superior fish. Whether or not it will be possible for the family to become sufficiently acclimatised to become common in Southland rivers is a question for debate by piscicultural experts, but the catching of the two fish should do much to raise the hopes of followers of the sport. 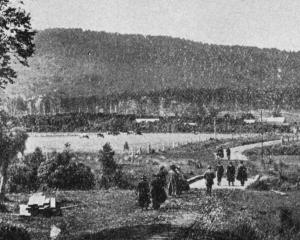