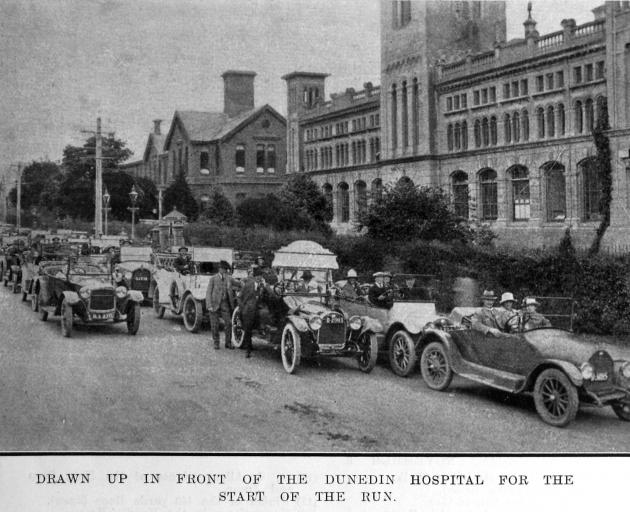 Cars from the Otago Motor Club drawn up in front of the Dunedin Hospital waiting to take wounded and invalided soldiers on the opening run of the season. — Otago Witness, 18.11.1919.
Labour Party 'window-dressing'

It is being alleged on behalf of the New Zealand Labour Party that it is a constructive policy which it is placing before the electors. This claim will, we have no doubt, be reiterated from every Labour platform throughout the election contest. It was said last week by an Otago candidate in the interests of the party that "he was not out to destroy anything". Those who are best acquainted with this candidate will acquit him of any device to participate in any programme of ruthless and insensate destruction. He is dissatisfied with the existing social and political institutions, and he is honestly desirous of effecting reforms that will not involve the tragedy of a revolution. Of other candidates on behalf of the New Zealand Labour Party the same may be said with equal truth. What may reasonably be questioned, however, is whether the principles which they assert are at all satisfactory to the men who actually control the policy of the party. The Labour Party, like the other political parties in the dominion, puts its most attractive wares before the public. The art of window-dressing is not unknown to its leaders. But it is impossible to ignore the fact that its most prominent members have declared themselves to be revolutionary Socialists, Some among them have, indeed, not hesitated to admit that they are Bolshevists. And these, it is to be remembered, are the men in the party who exercise the greatest measure of influence among the classes from which the "movement" derives its largest amount of support.

We recently gave some particulars of the proposal of the Patients and Prisoners' Aid Society to establish a convalescent home for hospital and other patients who have passed the acute stage of their illness, and only require a period of rest and quietness in a comfortable home, where every care will be taken of them, to again fit them for the battle of life. This want has been felt for a long time in the community, and is now about to be supplied. The society's agent has done his best to care for patients who are in the convalescent stage by sending them to homes in the country until they are restored to health, and the Victoria Jubilee Convalescent Fund has to some extent provided accommodation of the kind, but the combined efforts of the two organisations have at best only very partially met the need of a regular home such as the Patients and Prisoners' Aid Society now proposed to establish. Convalescent patients have hitherto been sent to private homes in the country to such people who are willing to receive them on a paying basis. This method of dealing with such cases has been regarded by the committee and its agent as unsatisfactory, and the committee has felt that it is compelled to meet the growing need for a suitably-situated and properly-equipped convalescent home, under the care of persons qualified for the work. A charmingly situated property has been acquired at Warrington.

Favoured with ideal weather, the Otago Motor Club's opening run of the 1919-1920 season proved highly successful. It was the wish of club members that the opening day should be used to give an outing to all soldiers in hospital who were able to make the trip, and this idea was carried out. Between 40 and 50 cars assembled at the Dunedin Hospital, and were quickly filled, under the supervision of the club's secretary (Mr P. H. Power).