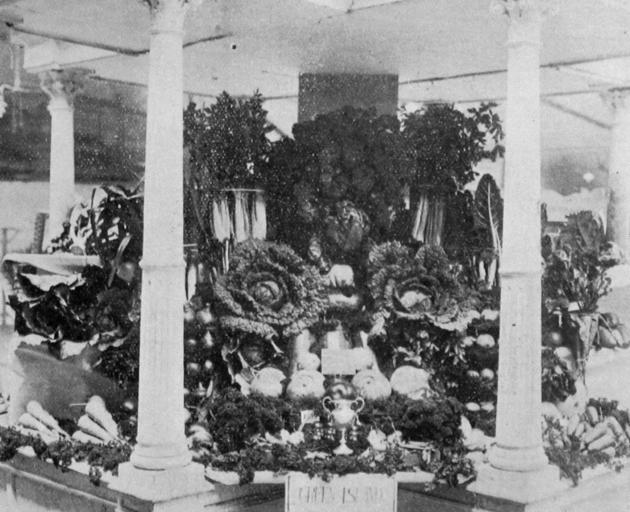 Green Island School won first prize for this produce display at the Otago A&P Society winter show. — Otago Witness, 8.6.1920.
London: Speaking at a Western Australian dinner, at which the Agent General Mr J.D. Connolly presided, Admiral Beatty, who proposed the toast of Western Australia,  referred to the work of the Australian Navy during the war.

He said it had rendered great assistance towards the capture of German possessions. It had the honour of capturing the first German war vessel, the Comet, and the destruction of the notorious Emden was another achievement of which Australia might well be proud.  The first vessel to penetrate the sea of Marmara was an Australian submarine, and later the Australia, Melbourne and Sydney came under his own personal observation, where he had the opportunity of recognising the Australians as seamen and fighting men. The Australian Navy had justified its existence and was of the greatest help to the British Empire in carrying out the struggle. The war was now over and the menace of the German navy had passed away. “We are now trying to utilise the experience of the war,” said Lord Beatty, “in order to see that the sacrifice of five years shall not have been in vain. First and foremost, we learn that the naval co-operation of the dominions must form an integral part of the Empire defence. As an Empire our strength lies in our common interest.  What we have to devise today is the co-operation of the dominions in the naval defence of the Empire. The Australian Navy is an excellent example of what form that should take.”

Interesting figures concerning the South African war were given by Lieutenant Colonel F.B. Creswell at the veterans’ reunion on Saturday night. The war, he said, lasted two years and a half and New Zealand sent 10 contingents, or 6505 men in all. The casualties were: deaths, 232; killed in action 58; died of wounds, ten; died of disease 139; accidentally killed 25.

Germans to be repatriated

Wellington: In reference to a recent cablegram from Sydney concerning the departure of the steamer Main for New Zealand with a number of Germans aboard to be repatriated, it is now ascertained that the vessel really left for Apia, where she is due in a day or two and will there take aboard practically all the Germans remaining on the island. The Main was formerly a German ship and has been provided by the Imperial government for the carriage away from here of a number of Germans, some of whom were being compulsorily repatriated and some of whom desired to be repatriated. The bulk of the Germans sent on account of New Zealand are planters and others in Samoa, about 200 in all, mostly full-blooded Germans with no Samoan family ties.

Picton centenarian Mr William Fortescue celebrated his 103rd birthday on Monday last. Mr Fortescue arrived in New Zealand in 1840, landing at Petone, where he acted as store keeper for the New Zealand Land Company. He joined the throng at Gabriel's Gully at the time of the rush. Upon being presented to the Prince of Wales at Picton recently, the old man remarked: Yes. I remember your father, your grandfather and your great-grandfather too, and I also lived in the reign of George III.
— ODT, 9.6.1920.