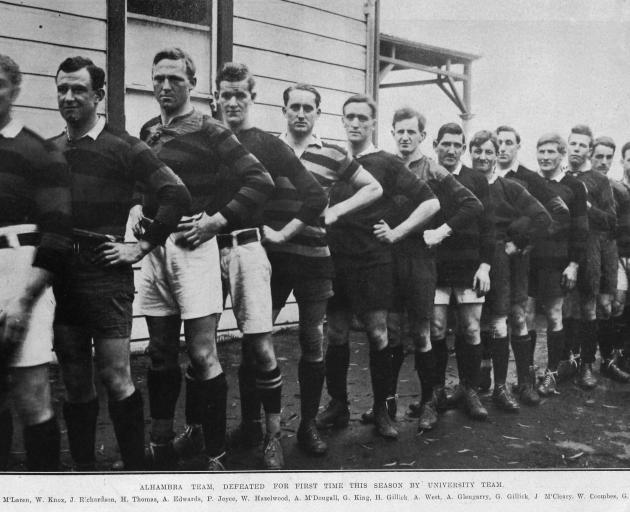 Alhambra rugby team, defeated for the first time this season by University (from left) J. McLaren, W. Knox, J. Richardson, H. Thomas, A. Edwards, P. Joyce, W. Hazelwood, A. McDougall, G. King, H. Gillick, A. West, A. Glengarry, G. Gillick, J. McCleary, W. Coombes, G. Thompson. — Otago Witness, 13.7.1920. COPIES OF PICTURE AVAILABLE FROM ODT FRONT OFFICE, LOWER STUART ST, OR WWW.OTAGOIMAGES.CO.NZ
The Board of Agriculture is strongly impressed with the necessity for increased production and the fact that it must come largely from the land. Realising that a high standard of scientific education is necessary to enable the land user to win the maximum product, the board has recommended certain definite proposals to the Council of Agriculture. These include an extension of the system of farmers’ courses such as have been so successful at Ruakura. Where an experimental station is not available, it is recommended that the classes be held at some suitable farm. The board also desires that additional field instructors be appointed and that where possible more farm schools be established. A fully equipped agricultural college is suggested and also the creation of a Chair of Agriculture, so that a degree in the science of agriculture may be available to those qualifying.

Milk as a cause of infection

The possibility of serious infection being spread through milk is hardly as widely realised as it ought to be, and the Health Department and the Agricultural Department are at present conferring with a view to having milkmen better informed on the subject and making them more prompt to notify any outbreak of disease. The need for some such steps is illustrated by a case that has come under the notice of the Health Department here, in which a young milkman who had a case of diphtheria in his house, failed to realise the possibilities of danger. Eventually he called in a doctor and the patient was promptly transferred to the hospital.

The Health Department found that there were four “carriers” of the disease among those working with the milk, and their duties had, of course, to be taken up by others. Later five cases of diphtheria were reported from among this man’s customers.

At a well-attended meeting of the Waipori Miners’ Association held at Waipori on Saturday to consider a request from the Tuapeka Miners’ Association to confer with the Dunedin City Corporation, the following motion was carried unanimously: “That the action of the corporation in its original Dunedin Waterworks Empowering Bill, 1917, in which it had a clause that no compensation was to be paid to anyone, together with its inclusion of clause 5 in its present Bill, which would have the effect of totally destroying all gold mining at Waipori, proves to the miners of this district that the corporation has no consideration whatever for the rights of the miners and this association cannot see its way to confer with the corporation, but will depend on the members of the House of Representatives for justice.”

London: The S.S. Mahana has left for New Zealand today with 960 English girls on board. The vessel was specially chartered for the accommodation of this large number of girl immigrants, over half of whom are affianced to members of the immobilised NZEF. Included in the passenger list are 40 infants under three and another 120 children under 12 years. The vessel has been facetiously termed the “sweethearts’ ship”.

Unauthorised use of crib

Magistrate bogged down on beach

Favourite for US president