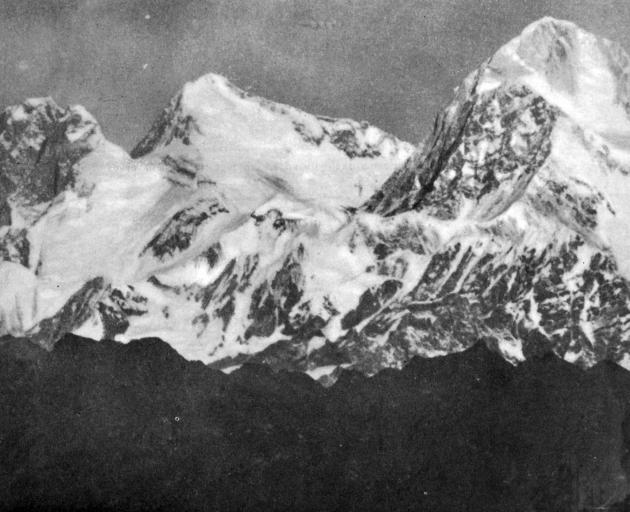 Mt Everest, the world's highest peak (centre) with Makalu (fifth-highest, right)— Otago Witness, 31.1.1922
Auckland: In proposing that a committee be appointed to inquire into the state of higher agricultural education in New Zealand, Professor Segar told the University Senate that the provisions for higher agricultural education in the dominion were altogether inadequate, both in quantity and quality. Professor Banham, in seconding the motion, said that it was very desirable that the committee should inquire into the possibility of improving the instruction in agriculture. Professor Hight, in supporting the resolution, referred to the opinions expressed by the rural education committee of the Canterbury Progress League, which had made a special inquiry into higher agricultural education, and who felt strongly that the School of Agriculture at Lincoln might perform a much more active function than at present, particularly in the fostering of agricultural research and the training of teachers of agriculture. The professor expressed the opinion that there should be a chair of agriculture in each of the four chief towns.

The Chancellor said he would very much like to see an agricultural school established in Auckland in connection with the university, the university to teach chemistry and other necessary subjects, and the school to deal with the remaining subjects.

Sir John Logan Campbell had left provision for a school of agriculture, but the estate would not yet be realised. The motion was carried.

London, January 24: The Mount Everest party is sailing at the end of February, and will reach the foot of Everest in May. The climbing party numbers four, who will make a dash for the summit, taking advantage of the previously-prepared advance camps. — The Times

The 161st anniversary of the birth of Robert Burns was celebrated last night at the instance of the Dunedin Burns Club, by a concert in His Majesty's Theatre. There was a very large audience, not exclusively Scotch, but it was made apparent very soon that the great majority were of that nationality. The President of the Burns Club, Mr Alex McLeod, who presided, briefly opened the proceedings by remarking that the memory of Robert Burns was implanted in the hearts of the people for over a century. His voice had rung through their nation and it was ringing even more loudly and clearly today than when first it was heard. His memory was fixed amongst the stars of immortality.

A moonlight excursion down the harbour last night proved as popular as the first trip. The Waikana carried a large and merry crowd of passengers, and the presence of the St Kilda Band was a guarantee that the musical part of the evening was in good hands. On another deck a banjo quartet played the latest songs about Hawaii. The excursion, which was to the Heads and back, was in aid of charity.

The extraordinary fertility of the Balclutha soil is well known and this fact was again emphasised the other day when a Clutha Leader representative was shown several sticks of rhubarb grown in a local garden that measured more than 3 feet tall. —  ODT, 26.1.1922.