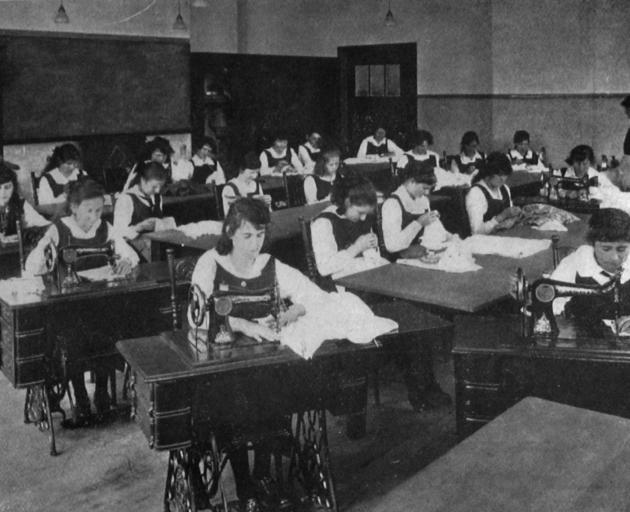 A sewing and dressmaking class at King Edward Technical College. - Otago Witness, 11.11.1919.
Yesterday there came round the anniversary of the historic moment when a sudden silence fell upon the roaring battlefields of Europe and the world began again slowly to breathe with freedom once more.

The seemly and worthy suggestions for honouring the occasion that were flashed round the world from his Majesty the King commended themselves surely to the good sense of the people at large, and the procedure proposed was carried out loyally and impressively throughout the city. Five minutes before 11 o'clock the booming of bells recalled wandering thoughts, and put everyone about the streets in readiness to do simple homage to the glorious dead and to acknowledge thankfulness to God at the appointed hour. Faithfully all the streaming flags were lowered to half mast. As the first notes rang out all traffic in the main streets slowed and stopped. Men's hats were removed, a little uncertainly at first and then as if by common consent. Shop employees trooped out to the doors and stood silent and reverent. Heads were lowered in prayer. The solemn quiet time seemed to stretch out into amazing length.

The war overturned Empires, dethroned monarchs, and dragged dynasties in the dust, and as a result several kings who lost their thrones are now unable to pay their hotel bills. Constantine, the deposed King of Greece, whose wife, Sophia, is the sister of the ex-Kaiser, is in this unhappy state. In 1917, as a result of Russia's defection and a united German-Austrian offensive, the German High Command proposed to assist the Bulgarians in driving the Allied troops from Salonika, and Constantine proposed to help by employing the Greek army in an attack on the rear of the Allies. The Allied Governments then took two steps to depose Constantine and place his second son, Alexander, on the throne. Constantine, Queen Sophia, and the Crown Prince made their home in Switzerland. The Greek Government of M. Venizelos made an allowance at the rate of 20,000 a year to the exiled monarch; but this was discontinued as the result of Constantine continuing to plot against the Allies and against the policy of the new Greek Government. He had then to depend on gifts of money from the Kaiser, but these came to an end with the revolution in Germany and the flight of the Kaiser to Holland. Constantine, with his wife and family and suite, now live at the Hotel National at Lucerne. Their weekly hotel bill is not punctually paid, as the deposed monarch has to depend on what he can borrow from wealthy Greeks on whom he bestowed favours when he was a king. The ex-King goes about the town on foot, and his granddaughters use bicycles, because the family cannot afford a motor car. The haughty Sophia refuses to show herself in public, and receives no visitors.

There was a heavy fall of snow in the district on Sunday week (says the Lake County Press). The snow commenced to fall at mid-day and continued until midnight. On Monday there was a depth of about three inches in the town; while at Crown Terrace there was six inches. The snow quickly disappeared from the low country, but there is still a good coating on the mountain tops. - ODT, 12.11.1919.