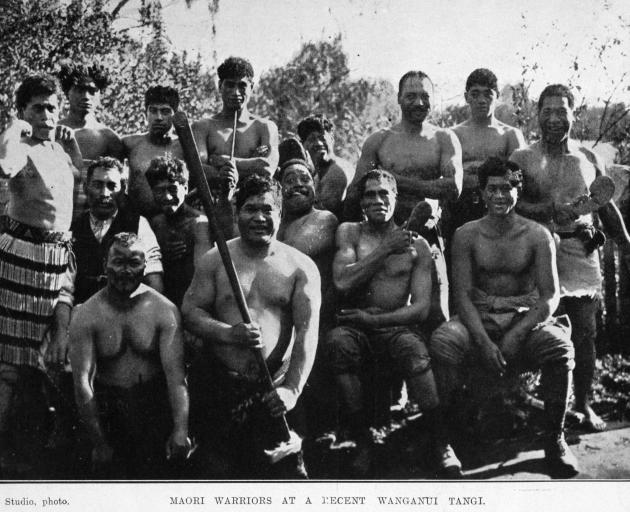 Maori warriors at a recent tangi in Wanganui. — Otago Witness, 31.8.1920. COPIES OF PICTURE AVAILABLE FROM ODT FRONT OFFICE, LOWER STUART ST, OR WWW.OTAGOIMAGES.CO.NZ
Last night at Trinity Methodist Church the Rev. M. A. Rugby Pratt entered an emphatic protest against the proposal to increase the number of racing days in the dominion. He commended the action of the Government in endeavouring to eliminate the bookmaker, and expressed the hope that the anti-gambling forces would stiffen the determination of the Government not to increase the facilities for racing. The preacher had no word of protest against sport, nor against racing as such. He held that racing was now carried on not as a sport, but as a business for the sake of betting. It was a poor sport that could not live on its own merits. In this country, he said, the totalisator had promoted excessive racing and had widened the area and vastly increased the volume of betting. The gambling evil had grown to colossal proportions. The vice was protean in its manifestations and permeated all classes of society. In factories, work rooms, shops and offices the staple talk was often of betting. There was scarcely a judge or magistrate in the country but denounced gambling and had condemned the totalisator as being responsible for piling up a record of wrong ... That in the end the gambler must lose was not merely a moral platitude but a certainty demonstrated by the inexorable laws of mathematics.

Gambling enriched only the racing clubs, the bookmakers and the sweepstakes promoters. The duped gambler always had to foot the bill.

The Chief School Medical Officer and the Chief Dental Officer of the Education Department set out for popular information some highly instructive matter on the all-important question of rational diet and the prevention of dental disease. It is not enough for parents to follow the departmental instructions respecting the great danger to the teeth of growing children arising from the unrestricted consumption of sugar.

There are other classes of foods which are dangerous to the teeth, and parents are advised in detail as to what they should place before their offspring and what they shall deny them. The officers of the department hope that it will not be long before white bread is banished from the diet of growing children. The officers state that, fortunately, there is an easy remedy for conditions of stagnation of the mouth after food. Fresh fruit, especially orange and apple, will produce an immediate and copious flow of saliva, and, as it is recognised that all foods which are injurious to the teeth cannot be readily banished from the average diet of the day, parents should make sure that such foods are followed by fresh fruit. No doubt this is most admirable counsel.

Lady clerks of Timaru, at a meeting on Tuesday for discussion of the subject, (says the Herald) decided to take steps to obtain a separate award for women clerks, as it was considered that the present scale of salary should be increased, and the conditions under which they work improved. At a meeting of other office employees on Wednesday it was decided to approach the employers for an increase in salaries. At both meetings a universal Saturday half holiday was approved. — ODT, 23.8.1920.