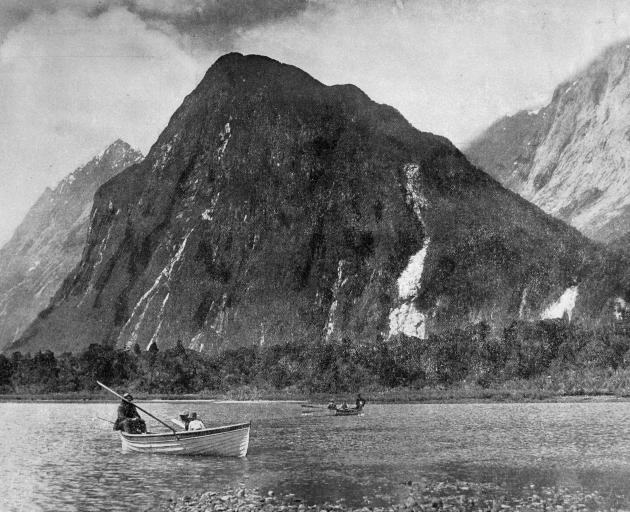 Arthur River, Milford Sound. — Otago Witness, 17.8.1920.
The member for Dunedin Central is to be congratulated upon his endeavour to secure amendment of the law in the direction of the prohibition of live pigeon shooting matches.

The recent discussion of the subject in our columns revealed the existence of a very strong and healthy feeling antagonistic to a practice which is apparently becoming increasingly popular with gun clubs. Live pigeon shooting matches, there is an excellent reason to judge, offend the feelings of the majority of thinking persons in the community, and there is no sound reason why they should be perpetrated in the interests of a small coterie, whose members are more concerned with displays of their own shooting prowess than influenced by the dictates of humanity. Not a few dubious claims are made and sanctioned in the name of “sport”, but none more open to objection than that which would assert the propriety and manliness of the past time of using live birds as targets, after the manner characteristic of pigeon shooting matches.

At yesterday’s meeting of the University Council the medical committee reported that on July 26 the business of the committee was consideration, with power to take such steps as deemed necessary, of the proposal to train women as operators in the school dental service.  It was resolved that a letter drawn up by Drs Pickerill, Benham and the registrar be sent to the Minister, endorsing the views of the dental faculty as to the undesirability of the proposed course. The Chairman stated that the letter had been drawn up as desired, and Mr Sidey had telegraphed that the Minister had appointed next Friday morning as the time for interviewing Sir John Roberts and Dr Pickerill. The Minister also stated that if Otago would not train the dentists, as recommended by Mr T. A. Hunter, he would require to have them trained elsewhere. The chairman said that the proposal was to give women one year’s training and then put them out into public service as operators. The faculty was against that, the university council was against it and the Dental Associations, with the exception of Auckland, were against it.

There is one interesting little fact about New Zealand’s new Governor-General which the paragraphists seem to have overlooked (says the Lyttelton Times). Lord Jellicoe was amongst those great naval and military leaders in the late war who were asked to accept at the hands of a grateful country a substantial monetary reward in addition to a peerage. Lord Jellicoe accepted the honour of a peerage, but declined the monetary grant of £50,000. The action was characteristic, and it gives point to his subsequent election to become the Governor-General of New Zealand, rather than of the Australian Commonwealth, on the score that the latter post required greater wealth than he possessed. — ODT, 18.8.1920.