Bible camp at The Camp

Young Methodist women at Larnach Castle for a bible class camp during Easter. — Otago Witness, 2.5.1922
The Methodist Young Women’s Bible Class Camp, held at Larnach’s Castle over Easter, was attended by nearly 200 delegates, among whom was Dr Muriel Bell, of Dunedin. Good Friday saw the opening session of the programme, when the visiting delegates wore welcomed by Sister Emily, the president of the Methodist Bible Class Union, and the newly-appointed travelling secretary Miss Delight Lynn BA was introduced. The morning session was concluded by the celebration of Holy Communion administered by the Rev M.A. Rugby Pratt. Preparatory to the morning service on Sunday, Miss Elsie Graham, travelling secretary of the Student Movement, who was a member of the camp, gave an address on the dire needs of the students of Russia and Central Enrope, and during the service conducted by Dr Waddell an offertory amounting to nearly £6 was taken up for the relief funds. On Monday afternoon the estate was thronged with visitors of the delegates. After the camp photographs had been taken, the visitors were entertained to afternoon tea, which was followed by a concert.

Mr W.T. Goodwin, on his return to Wellington from Dunedin, told a Dominion reporter that a great deal of interest centred in the initial shipment of 5000 cases of apples going forward to London from Central Otago by the steamer Cornwall this week. "The crop is a very good one," said Mr Goodwin. "It is the first lot that has come into bearing, and will very favourably compare with the best shipments from Nelson. Central Otago is, as you know, entirely immune from black spot. The area cropped for apples lies between Island Block and Pembroke, and apples are being taken from Ettrick, Roxburgh, Alexandra, and Clyde. Preparations are going forward for extensive planting at Cromwell, further up. The trees there are not expected to produce for export till next season. The chief varieties in the present export parcel are Cleopatra, Scarlet Nonpareil, Sturmer, Delicious and Newtown Pippin. They are fairly evenly divided. A few pears are going forward, of the Winter Nelis variety. The local instructors of the Agricultural Department’s staff have been assisting and getting the shipment up to a commercial standard, in order that it might meet with a profitable handling at Home." The chief difficulty at present was in packing, owing to the scarcity of experienced men in this trade in the district.

The disclosure cabled from Melbourne of a baronet working as a market gardener, while his wife was a charwoman is yet another of those romances of the casual in colonial life that are continually outcropping on the surface of our everyday life (says the Feilding Star). There have been and still are parallel cases in New Zealand. There was the case in the South Island of a Scots baronet of ancient lineage who married the washerwoman of a small township. Their eldest son worked as a labourer on a farm in the Feilding district a few years ago. That son is the baronet today. But, like his father, he does not use the title, and earns his living by taking casual jobs. There is a resident in Feilding today, living a humble and retired life, whose mother was entitled to be addressed as "her ladyship", but her neighbours did not suspect her real identity, as she dropped the title on coming to New Zealand. — ODT, 24.4.1922 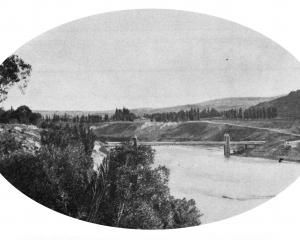