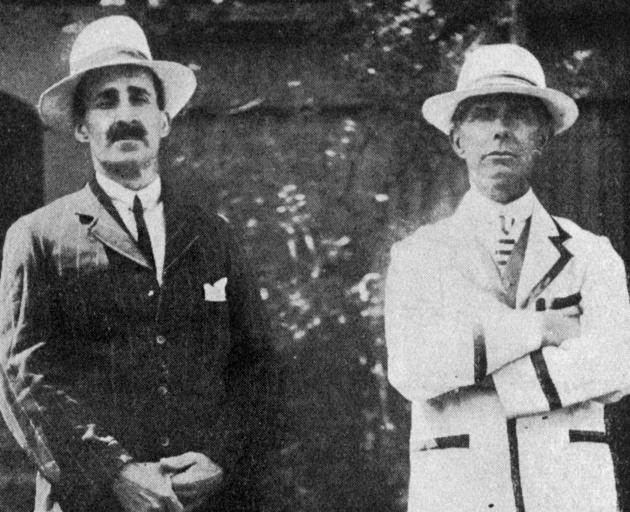 Two out of the three competitions in the Dominion Bowling Tournament were concluded yesterday on the Dunedin green in the presence of a few hundred spectators.

Both the semi-final and final games in the rinks competition were distinctly disappointing owing to the surprising collapse of three rinks which had been playing at the top of their form the afternoon before.

The semi-final in the singles competition was much more interesting, as the play was even, Rigby (N.E. Valley) and Carolin (St. Kilda) went into the final, which was won easily by the former.

His bowling was wonderfully accurate.

Rigby is therefore the singles champion of the dominion.

The radio telephone has become a practical everyday means of communication, available for all manner of purposes and exceeding by far the wildest dreams of the early workers in this art, says the Scientific American.

Radio telephone stations are being installed as rapidly as possible in every leading centre of the United States, for the purpose of sending out news bulletins, baseball scores, stock reports, crop surveys, weather bulletins, sermons, public speeches, and even music.

These broadcasting stations, as they are called, are being installed and operated by large manufacturing companies, who are anxious to furnish such service in the positive knowledge that it will increase the demand for radio apparatus.

The Government, too, is about to install radio telephone broadcasting stations which are to replace in whole or at least in part those stations now rendering a similar service in the Morse telegraph code.

Already in many an American family the evening’s diversions depend a great deal on the activities of the broadcasting stations.

With a loud-speaking telephone on the living room table, and with a simple receiving set, the members of the family can receive all the news that is worthy of widespread attention, followed by a musical programme.

Mr J. Horn (the member for Wakatipu) is concerned about the ignorance of the rest of the world about Alexandra and has given notice to ask the Minister in charge of the Tourists and Health Resorts Department whether he has seen the article in the Alexandra Herald of January 18, stating
that a businessman from London called at the Government Bureau in Christchurch, inquiring for information about Alexandra in Otago Central, but was unable to obtain any information.

Mr Horn asked whether the Minister will take steps to ensure that officers of Government bureaux know the geography of their own country.