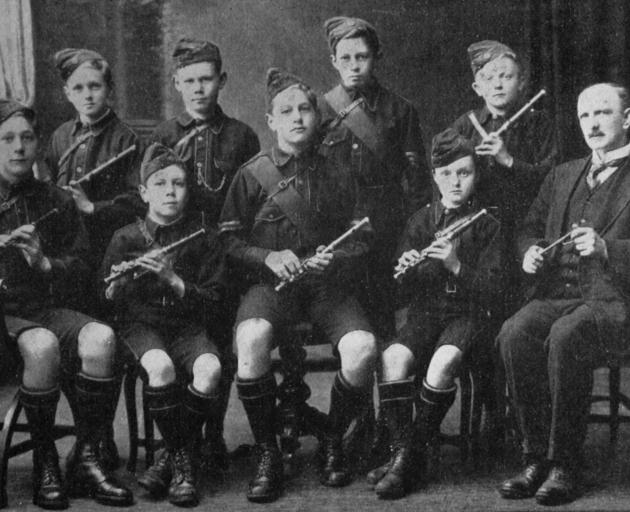 The George Street School band, double quartette, which won first prize at the Dunedin Competitions Society's festival. - Otago Witness, 28.10.1919.
Notable testimony to the place secured by Great Britain among the nations in the matter of aviation was recently given at Washington, when the Assistant Secretary of War to the United States pointed out to the Military Committee of the Senate that Britain was far ahead of the rest of the world in respect of the development of air forces.

Interesting views were expressed on the same occasion respecting the part which aviation may be expected to play in war in the future, these views being based upon the opinions of great military experts who have had the best of opportunities of judging the line of prospective development in military aviation.

Marshals Haig and Foch are credited with agreeing that before mobilisation of armies could be affected in the next war a great conflict would occur in the air, and that an aggressive nation would be prepared to launch an aerial attack upon the shipping and munition centres, and even the cities, of its opponents.

Their prognostication must strengthen the hope entertained by the civilised nations of the world that there should not be any next war, if the League of Nations or any other agency can possibly avert it. In the course of a recent interview at Amsterdam Fokker, the Dutch inventor of the well-known German aeroplane bearing his name, is credited with saying that he thinks the Germans lost the war in the air.

Apparently he blames the German War Office for bungling a plan of his for overwhelming the Allies by ''scrapping'' the big gun altogether in favour of shelling by flocks of wireless-controlled aeroplanes.

This genial conception originated, we are told, with the German army authorities in 1916, when they asked Fokker if he could devise a very cheap aeroplane with a very cheap engine, capable of flying about four hours, which could be steered through the air by wireless waves.

Each of these aeroplanes was to be loaded with a huge bomb, and a single airman would herd them by wireless through the sky like a flock of sheep, steering them as he pleased and sending them to earth at the spot selected.

The German War Office was bogged down in red tape, but in the summer of 1918 came to Fokker with a huge order for the wireless-steered planes, which he had just got ready to manufacture in wholesale quantities, when the war came to an end.

Sir,- It would be difficult to imagine a more insane policy than is being carried out in the bush districts of Catlins, Tahakopa, Ratanui, and I dare say many other localities where, under the pretence of settlement, millions of feet of valuable timber are annually being destroyed to make way for a few cattle.

What are our legislators - or more aptly speaking, our ''politicians'' - doing to allow this idiocy to continue? - I am, etc., John Christie. Warepa.

There were some anxious citizens in Masterton the other afternoon. A rumour got abroad that tied to some broken jars of beer, distributed by a runaway delivery cart, were labels giving the names of those who had ordered the beverages.

Prominent residents whose friends would never suspect them of ordering beer soon appeared upon the scene to make sure their labels were not exposed to the view of a shocked public.