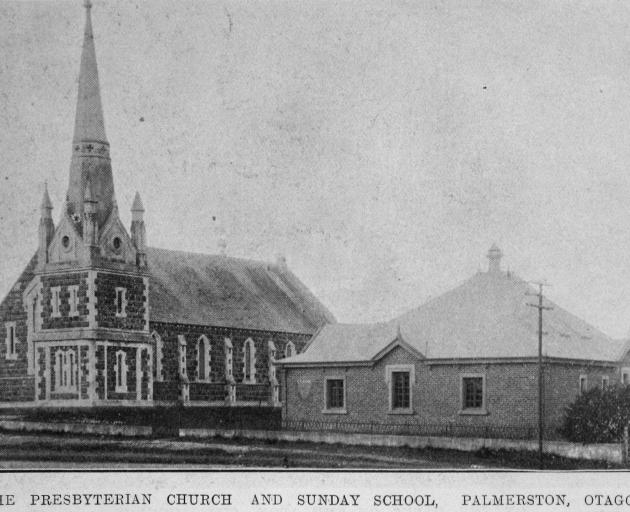 The Presbyterian church and Sunday school, Palmerston. — Otago Witness, 29.6.1920. COPIES OF PICTURE AVAILABLE FROM ODT FRONT OFFICE, LOWER STUART ST, OR WWW.OTAGOIMAGES.CO.NZ
It has been made fairly evident that the consumers, that is to say the general public, would not feel any resentment at the entry of Chinese retailers into the local fruit trade, if that meant an assurance that fruit would be procurable at a more reasonable rate. Notwithstanding the abundant supplies that should be available, the retail price of fruit in Dunedin has rendered it rather a luxury obtainable only by the few than an article of diet within the reach of all, as ought to be the case. If any responsibility for this state of affairs rests with the Retail Fruiterers’ Association, then the appearance of Chinese in the trade has something of the aspect of a Nemesis.  We do not imagine that the appeal of the association will receive much practical sympathy from the consumer, who is wont to purchase where he can best study the limitations of his pocket.  Nor  will very many, we think, take the view that the Chinese is a fair target for attack who presumes to open a retail fruit business, or indeed any other business, in competition with the white man in this country. So long as the Chinese are allowed entry into this country under certain conditions, the idea they have no right to an honest livelihood in this direction or that is quite untenable.

During the period of the war, the Roxburgh Railway League was quiescent, realising that all of the forces of the country had to be concentrated on the one great object, the successful prosecution of the war. Since the cessation of hostilities, the executive has quietly and unobtrusively brought the needs of the district under the notice of the Government and reminded the Minister of the promise, with the result that for the last two months engineers have been engaged surveying the line between Beaumont and Millers Flat. The time had now arrived for united action by the districts concerned, and with this object in view a large and enthusiastic meeting of residents was held on Tuesday evening last. Mr John Bennetts presided and a strong feeling of enthusiasm and optimism prevailed. While expressing gratification that a commencement had been made with the survey, it was felt that there was a need for greater activity than ever and that nothing less than the united forces of all the public bodies in the district would be required to impress the government with the earnestness of the people’s demands.

Despatches from Glen Campbell (Pennsylvania) state that husbands of that community in the future will be rated under a “moral pedigree”. Intended husbands also will come
under the same classification.  At least, so say 36 of Glen Campbell’s leading women, who have formed a secret organisation, the object of which will be to know a man morally. The new organisation was formed to clean up the morals of the community, particularly the morals of husbands.The women are establishing a sort of “moral credit bureau”, which proposes to gather all the requisite facts regarding a husband’s conduct, keep it on a file at headquarters, and submit a confidential report to any woman who suspects her mate and asks for his rating.

Some Penn., men have long sideboards, full of drink.

Rather sexiest comment don't you think? I guess sexist is better than promoting illegal or illicit behavior. Are men going to be added to the banned from Dunedin list? Amazing how the libs all want to do away with that pesky concept called due process. More dribble from the hill.

A word about 'Bell'. I cannot write without word association (football). 'Long sideboards full of drink' refers to liquor cabinets.

As for sexism, men should expect a bit of backlash, being the gender that think they run everything, in an 'egemonic manner.

Lastly, argy, in my view, enhances the economic value of any Rag. Well done.

Yes, I would agree; Hull the Horrible. Always good to see that people recognize their limitations. I think it would be safe to say humor isn't a strong point. I haven't seen anything I would consider remotely funny. The sexist comments were bad, the racist comments speak for themselves. White rates, very poor form!

I am a black, Muslim man who emigrated from South Africa to New Zealand 11 years ago. I have experienced considerable racism and islamophobia during my time here. I'm sure you can understand each day I live with prejudice as you have never known. Why now, must I be further punished with the stigma of being a drunkard? I have never touched alcohol yet now because I am a man, Hill deems it necessary to futher stigmatize me as a drunkard? This is the type of prejudice I experience all of the time in this country. Why? Why is it ok to call me a drunk? I have no longboard, I have no drink, yet this Hill person is calling me a drunkard because I am a man. Is this not sexism? Do not the people of New Zealand think this is bad and ignorant? The Black Lives Matter has given me some hope that things will change here then I read sexist rubish like this. I realize not all New Zealand people say bad things like this but many of you have much hate in your hearts! Shame on you for labeling me and my Muslim brothers drunkards. It is not right!

I do not call you quaffer of drink. It's splendid to hear from a South African who is not with the White Rats who fled the Continent for NZ. Speaking of sinking p*ss, which We Didn't, those Rhodesians went into purveying spirituous liquor, and Tartars they were!, banning the Hotel Workers' Union.

White Rats? Your parents must be so proud of you now that you can add sexist and racist to your CV. You have much hate in your heart.

I am surprised that the ODT would support such sexist comments? The reader's comments were excessively flippant concerning a very real problem affecting both men and women. A recent Drug and Alcohol study found male and female respondents had a statistically equal prevalence of binge drinking and developing health problems as a result. The issue, male or female, is not humorous! The comments are sexist, ignorant, and uncalled for in these challenging social climates!

Do you think the ODT 'supports' points of view it publishes on comment threads? Commenters are not influencers. Don't drag the medium into it. Now, I don't object to criticism from a bunch of straights, given that I have been harsh on other commenters and advised they take the next Stage out of town, for the appalling attacks on the departing Ms Bidrose. Fair play to ye. Just be aware that you've made a great deal out of a moral charter of 100 Years Ago.

That's the connection I tried, but failed to make. Feckless men who drank when Dunedin was young.

Now, it is ludicrous to call jibes at men 'sexist', and ignorant not to acknowledge the former apartheid regimes of Africa were white and behaved like rats.