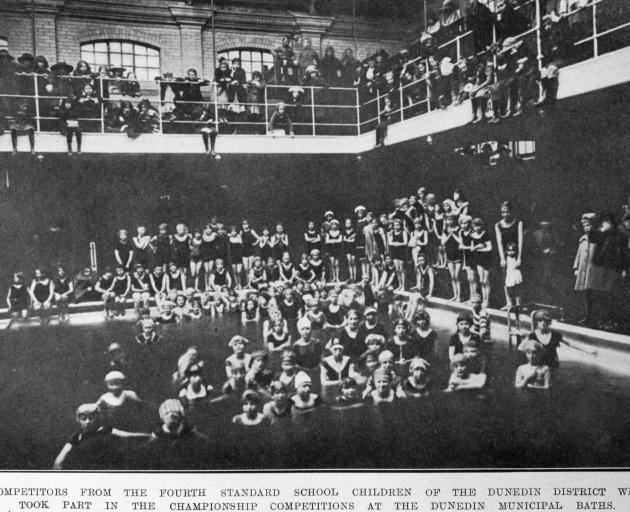 Competitors from the fourth standard school children of the Dunedin district who took part in the championship competition at the Dunedin Municipal Baths. — Otago Witness, 26.7.1921
The ordinary meeting of the City Council was held last evening, and was attended by the Mayor (Mr J.S. Douglas), and Crs Shacklock, Gilkison, Begg, Hancock, Wilson, Larnach, Hayward, Scott, Tapley, Sincock, and Taverner.

Cr Taverner moved the adoption of the Finance Committee's report, which stated that the General Committee had been authorised to incur the expenditure (estimated at £650) that would be involved in the installation of the filtration plant at the tepid baths.

The work would be carried out by the engineering staff of the Electric Power and Lighting Department, and would take about a month to complete. The expenditure was provided for in the current year’s estimates. Cr Sincock said they would require £120 more revenue to pay the interest on this increased expenditure. He hoped the

Finance Committee would watch the baths very closely, and see that the money allocated for their upkeep was not exceeded. Cr Tapley said it was never expected that the baths would pay, but at the same time they represented a handsome asset to the city.

Certain members of society in Christchurch have reason (says the Sun) to regret the appearance among them of one claiming to be a captain in the British Army. Also there are several business firms whose coffers in these sufficiently hard days are poorer for his advent. Coming here with  excellent credentials, which he vouched for personally, “the gallant captain” boasted of a very talented member of the English stage as a sister, and told how ill-health had compelled his sojourn overseas for recuperation. He was admitted to the homes of many Christchurch citizens. He became an object of admiration, even from marriageable misses, and at jazz and other dances his card was soon filled.

Then came word of the death of his brother at the hands of rioters in Ireland. Of course his brother had much to do with steel works in England, and steel magnates are worth money. Naturally the brother’s fortune was left to the captain, whose intrinsic value increased as time wore on, and his circle of acquaintances widened again. He had a substantial win in Tattersalls, and who would not lend money  on the strength of that? However his finances commenced to dwindle painfully, and the much-concerned captain told money lenders that his losses at poker on the previous evening amounted to £40,  and a temporary loan on his car (which he didn't possess) would help. He got the money. From another businessman he borrowed £7, and used the lender’s telephone to book a table at Warner's Hotel for dinner. That was at 4 o’clock in the afternoon. At 5 o’clock he was on his way to Lyttelton, and eventually reached Sydney. Where he is now numbers are curious to know. It is stated that valueless cheques from a cheque book, not his own, assisted the captain a good deal.

“Most people in these days have given up the habit of public worship, and I think for ourselves and for our fellow men it is a great wrong,” declared Bishop Sprott, when consecrating a new Anglican Church at Makara (Wellington) on Saturday afternoon. ‘‘I cannot understand why people should notdesire to get more and more knowledge of God. ’’