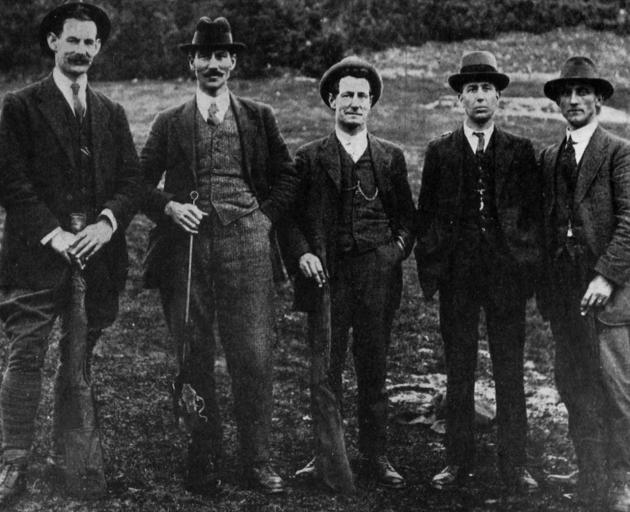 Winners at the Otago Miniature Rifle Association's open air shoot on Labour Day. From left: J. A. Armit, winner of the president's match; W. Ogg, Otago match; W. Ansell, runner-up for aggregate prize; H. Pettel, winner, Normanby match; P. Ruddiman, winner aggregate prize. - Otago Witness, 4.11.1919.
Sydney: The latest developments in the Northern Territory have placed the Federal Government in a very awkward position. The situation may quite easily produce a disaster of a dangerous kind, if it is not handled by great tact combined with great firmness.

The people's committee compelled the administrator, the judge, and the chief clerk to go aboard a steamer and leave Darwin. By that act they have completely defied Federal Authority, and have removed from their midst the machinery of government. They apparently insisted that for the time being they are outside the scope of the Australian Government.

The next move is awaited with trepidation. There are warships, as it happens, engaged in practice in Northern Queensland waters, and it is believed that some of them have been ordered round to Darwin. If the officials are put back in their places under the protection of the warships, there will almost certainly be bloodshed.

Yet that seems to be what the Government intends to do. It holds that its authority has been flouted, and that it must assert its authority. A less drastic course might be followed. The 2000 white people in the Northern Territory are literally kept there with Government money.

If the Government, having been treated in this way, simply withdrew all its activities from the Northern Territory, the population would be starved into submission in a few weeks and a new and better system of administering the Territory might be mutually agreed on.

It is worth remembering, by the way, that the Darwin population is more or less dominated by most undesirable elements - foreign agitators and Bolshevists predominating.

It is these men who have led the people into the present impasse - and if the Government takes drastic action it will be to teach them a lesson.

Bright lights and the sound of a tinkling piano announced that the new girls' club room was in use last night. About 40 girls were present, the evening being spent in games and other amusements.

Miss Black (secretary of the Y.W.C.A.) explained the objects of the club to them during the course of the evening. The club will be open two nights a week, and after that it is intended to be open every night for the use of any girls in town, and their friends of either sex.

The promoters have every reason to be satisfied with the success of the opening night.

A Riverton correspondent of the Southland Times writes: The gale which raged here on Friday night was of a very uncommon nature. It came in gusts and whirls, accompanied by heavy showers and hailstorms.

Considerable damage was done in Riverton. Several board and picket fences were blown down, tanks blown over, and outbuildings, including a store shed on the wharf belonging to the Harbour Board capsized. Gardens and orchards also suffered.

The leaves of peas, potatoes, etc., were blackened and shrivelled up, while the fruit trees which were in blossom suffered heavily also.

Reports from the Upper Clutha Valley are that Sunday's storm was fairly severe in that region. Snow fell heavily throughout the day, and as far down as Queensberry there was a depth of up to three inches on the flats (says the Cromwell Argus).