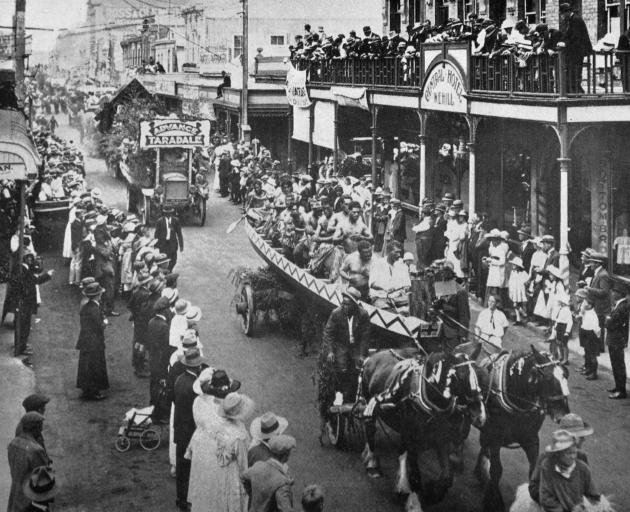 Floats from the Maori community and the Taradale district in a Mardi Gras parade at Napier. - Otago Witness, 13.1.1920.
It is a sad commentary on the state of the city's public accommodations that the most urgent business to be arranged in connection with the forthcoming Carnival Week should be the matter of providing for the influx of visitors which may be expected.

During the holidays little could be done, but now that the festive season is over, the problem is to be tackled straight away.  To this end a meeting was held yesterday in Mr. H. H. Divers's board room.

The Mayor (Mr. W. Begg) presided.  Mr Paape remarked that a visitor wiring on the day of his arrival had no chance of obtaining accommodation just now.  Even in ordinary times accommodation was booked well ahead.

The only hope was from the general public, and he thought some sort of a personal appeal should be made.  The boardinghouses were fully taxed, and some were closing down owing to the cost of living.

The accommodation in the city in that respect was very much less than it was a year ago.  The position was most serious, and it was one which the City Council and the citizens would have to grapple with.

Mr Charles Todd suggested that the position might be relieved to a certain extent if country people were asked to make arrangements to stay with their friends in town wherever possible.

During Carnival Week in Christchurch, he said, visitors stayed as far afield as Sumner and Lyttleton.  After further discussion it was resolved that the meeting form itself into an executive, with Mr J. S. Douglas as chairman, to make the best possible arrangements for accommodating visitors during the holiday week.

Among the soldiers who returned by the transport Rimutaka was Second Lieutenant E. F. Tyson, who joined the ranks as early as April, 1915, and saw considerable service.  He went away as sergeant, and after spending some time in Egypt was transferred to Gallipoli in August, 1915.

He remained there about four months, and went back to Egypt, and later saw service in France, and was with the army of occupation at the Rhine.

He was then sent to England, where he took his commission.  He is the holder of the Military Cross.

Second Lieutenant Tyson is the youngest son of Mr J. Tyson, formerly of Rongahere, Tuapeka, who was at one time a noted wrestler.

Captain Dickson, of the Canterbury Aviation Company, has just completed the overland trip from Blenheim to Nelson, undertaken with the object of ascertaining the lay of the land and the possibility of establishing an air service between Christchurch and the northern parts of the South Island at a later date.

Captain Dickson was favourably impressed with the prospects.  He estimates that it would be a two-hour flight from Christchurch to Blenheim, and less than an hour from Blenheim to Wellington.

DARWIN: After a meeting, where the State monopoly of the liquor trade in the Northern Territory was roundly condemned, a deputation waited on the Administrator (Mr Stanford Smith) and urged that hotel hours be extended to what they were before the war.

More hotels and a brewery should also be provided.  The speakers stated that sly-grogging was rampant.  The liquor was atrocious in character.  It was sold even during the day, and was bought at exorbitant prices, with the full knowledge of the police and the authorities.