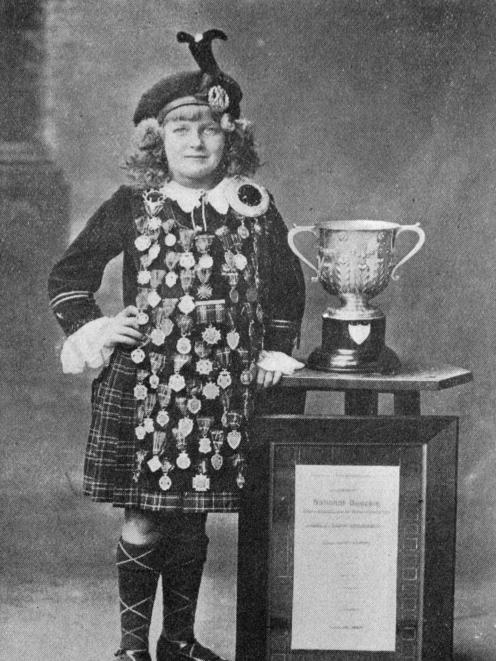 Doreen Wheeler, of Dunedin, with the Sutherland Memorial Challenge cup for Highland dancing she won at the Timaru Caledonian Sports. — Otago Witness, 31.1.1922
At the South Canterbury Caledonian Society’s sports, held at Timaru on Monday and Tuesday, Mr Robert Clark won the most points prize for adult dancing, and his pupil, Miss Doreen Wheeler, won the Sutherland Memorial Challenge Cup for the girls’ champion Highland dancer under 12 years, besides the gold medal prize for the most points.

This young dancer is the first to bring the cup to Dunedin.

A full report of the airplane accident which happened at Motunau on December and which caused the death of Mr H. O. Grout, has been compiled by  Constable F. T. Pool, of Cheviot, and the reports of several eye-witnesses are included.

A small boy, Charles Tomlinson, states that he saw the plane coming across a wheat-paddock before his father’s house.

t was not very high up, and seemed to be coming down slowly.

Then it turned right around and flew up the paddock for a few yards, tilted over and dived into the ground. The boy’s father, George Tomlinson, states that he heard the crash, but did not see the plane fall.

He went to the assistance of the pilot, who was jammed between the front of the engine and the seat, his legs being pinned.

The only words that Mr Grout said were: “My legs are caught.”

He appeared conscious at that time.

I consider that the fault lay in a blockage of petrol in the engine or was due to a magneto failure,” states James Cruse, a licensed ground engineer to the New Zealand Air Board, who was with Mr Grout at Seddon on the day prior to the accident.

He had then certified everything “OK’’. Mr Bullen, of Kaikoura, who examined the paddock in which the machine fell, says that it was not cut up at all, which would suggest that Mr Grout was flying very low when his machine dived.

With a view to taking legal proceedings against offenders, it was resolved that the attention of the Health Officer be drawn to the fact that although a tip had been provided in the neighbourhood of the lagoon at Portobello, people were depositing rubbish where the board had expressly declared by a notice it was not to be used for such purpose.

In order to obtain some outside assistance towards the maintenance of roads, it was decided to take a toll of the traffic on the Beach road from Dunedin to Portobello.

Wellington, January 6: Vessels arriving from Australia report very heavy weather in the Tasman Sea, and Marama, which arrived today, had a rough buffeting. She should, in the ordinary course, have reached Wellington on Tuesday morning last.

Soon after leaving Sydney she met a southeasterly gale and shipped much water.

Next day there was a dangerous sea, and speed had to be reduced.

On New Year’s Day, early in the morning, some ventilators were damaged and ports smashed, but otherwise the vessel stood the storm well. 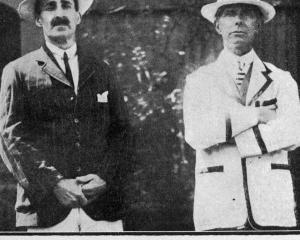