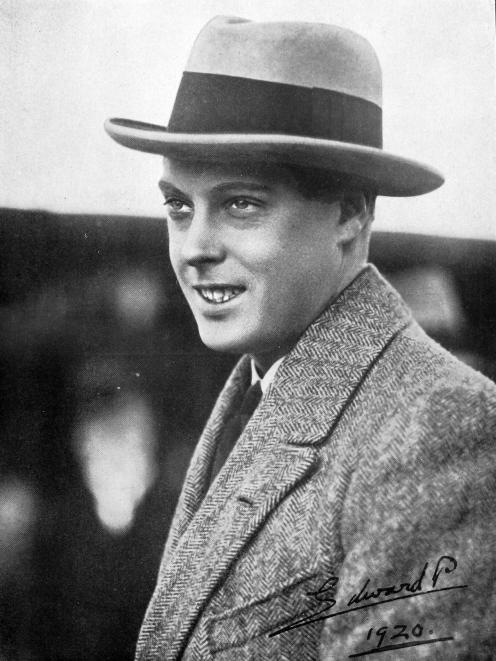 The Prince was so pleased with this Otago Witness photo when shown to him by his staff that he sent for Mr G. W. Palmer, our photographer, signed a copy of the photograph, and made the request that he be supplied with some copies for his own use. — Otago Witness
It is undoubtedly the age of the motor, and during his tour of America the Wellington city engineer was impressed with the fact that in some cities the motor had completely displaced the horse (says the Wellington Post).

Mr Moreton is of the opinion it would be wise for the city council to consider at an early date the advisability of procuring one or more electric vehicles in order to demonstrate their suitability under local conditions, capable of carrying say three tons and be for use in connection with the collection of rubbish. It is clear, he says, that petrol vehicles are unsuitable for collecting from door-to-door, owing to the great consumption of petrol. The electric vehicles consume power only when travelling, and are therefore, from the financial point of view, most suitable for this class of work. They are somewhat slow on the hills but reliable, and two such vehicles could be used with great advantage over the flatter portions of the city.

A proposal has been made to establish a company for the inauguration of a flying boat service between Auckland, Gisborne and Napier and to extend the service around the coasts of both the North and South Islands should circumstances warrant. Major S. C. Adams, who is visiting Gisborne and who served in the Royal Air Force in France and subsequently in Egypt, stated in an interview that the proposed flying boat service was quite practicable. Already a similar
service had been inaugurated along the coasts of England. If the service proved a financial success in England as a hobby, then it should be here. On the East Coast, where such service was a necessity, the proposal was to utilise a supermarine flying boat similar to that employed on the passenger flying services at Home. The boat was capable of carrying a pilot and three passengers and was able to fly 450 miles without replenishing petrol supplies.

Mr S. Cousins told the meeting of the Otago Acclimatisation Society’s council there was a general opinion that an open season for opossums would be established by law this year, and asked if there was any ground for the opinion.The chairman said it was understood that legislation was ready and that it would be introduced next session. He also stated that there were a number of grey opossums in one part of the province which could be trapped by anyone desiring them for stocking purposes. Steps were being taken to stock if possible the whole of the West Coast. There was some very good country for them also at Taieri Mouth. The secretary of the Auckland Acclimatisation Society wrote giving information favourable to the imported Virginian quail, also stating that, in the society’s opinion, beaver and muskrats would be good animals to import. A letter from the Wellington Acclimatisation Society stated that Virginian quail had not thriven very well, which was probably due to the fact that their principal natural food was ants.

Small catches made by fishermen

The fine weather yesterday morning tempted the fishing fleet to sea but the effects of the heavy gale of the previous few days was still a handicap although the wind had temporarily lulled. The day's catch was small, red cod being much in evidence when the haul was being trucked at Port Chalmers yesterday afternoon and evening. The seine boats, which fish within the harbour, had done rather better than the “outsiders’’, for they had struck a shoal of trevally, also some red cod in the vicinity of Pulling Point. Their supply was in excess of the local demand for “bob's worths’’ at the fisherman's steps and consequently a quantity of trevally was railed to the city to help to meet this morning's demand for fresh fish. — ODT, 25.5.1920.