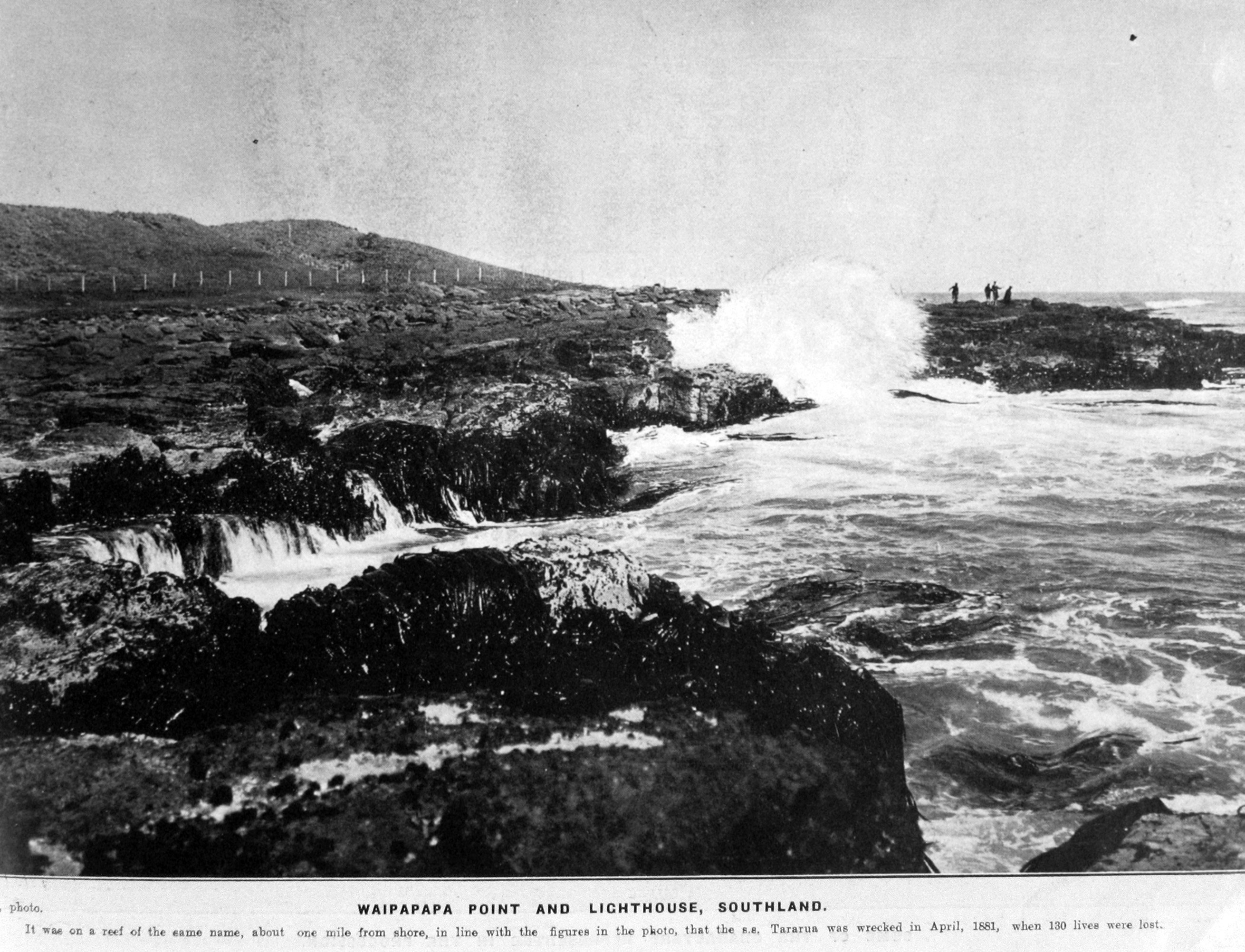 Waipapa Point and lighthouse, Southland. It was on a reef of the same name, about one mile from shore in line with the figures in the photo, that the SS Tararua was wrecked in April 1881, when 130 lives were lost. — Otago Witness, 31.8.1920. COPIES OF PICTURE AVAILABLE FROM ODT FRONT OFFICE, LOWER STUART ST, OR WWW.OTAGOIMAGES.CO.NZ
In the course of a vigorous denunciation of gambling the Rev. A.H. Wallace, preaching at the United Congregational Church last evening, quoted some pregnant remarks from Dr Saleeby’s “The Whole Armour of Man”. Dr Saleeby argued that the gambler always lost. There were doubtless rare apparent exceptions; persons who perhaps made a lucky speculation and then stopped, having sense and self-control enough at the right moment. He counted theirs as among the ill-gotten gains which never prospered. It was absolutely certain that such proceedings were an injury to the body politic and to the mind politic. They gravely injured the national “moral”. After the tragic and glorious events of the recent past we should have begun to think nationally. And who could say an honest word or anything more than a half truth in favour of speculation? The very possibility of making money in this way was a menace and an insult to all honest work. Our national life depended upon the doing of enough honest work and upon honest payment therefor. Nothing should pay a man better than honest work, for most amongst the consequences of speculation was the accursed virus of social jealousy.

Sydney: There is in the Commonwealth an uneasy and very widespread feeling that the policy of ‘‘White Australia’’ is in grave danger. This uneasiness has found expression in one or two guarded newspaper articles just put out, that where Australia expected to receive her mandate for the government of the captured German territories in the Pacific many months ago, it is not yet to hand. When Mr Hughes came back from the Peace Conference a year ago, he made several references to the mandate which indicated that he expected this official authority to follow him very shortly. Now it appears from the careful utterances of one or two Ministers that Australia need not expect her mandate until it has been approved by the executive body of the League of Nations. Why the delay? The answer is provided by everyone here who discusses the manner without hesitation. Japan, it is believed, is working through the channels of secret diplomacy to withhold the mandate from Australia until Australia cedes in some degree from her policy of a ‘‘White Australia.’’ ‘‘White Australia’’ is the most treasured gem in all Australia’s big collection of policies and formulas, and the people here will never give it up. They suspect Japan, naturally enough in the circumstances, but they also suspect English statesmanship. There seems no reason for it, but they believe that Britain would sell them to Japan.

Though recent sales indicate that it still errs on the conservative side, the revaluation of the Waikouaiti County seems to have come as a shock to some of the ratepayers, for the clerk has a sheaf of a dozen letters, couched in varying degrees of hostility, and demanding a reason for the increase in the amount of the writers’ rates. One woman, who could see only her own piece of the road in all the miles the county has to maintain, protested against having to pay rates at all when she got nothing for them, and a man in much the same spirit indignantly demanded to know why, seeing he had paid 1s in past years, he was now called upon to pay 3s 2d.