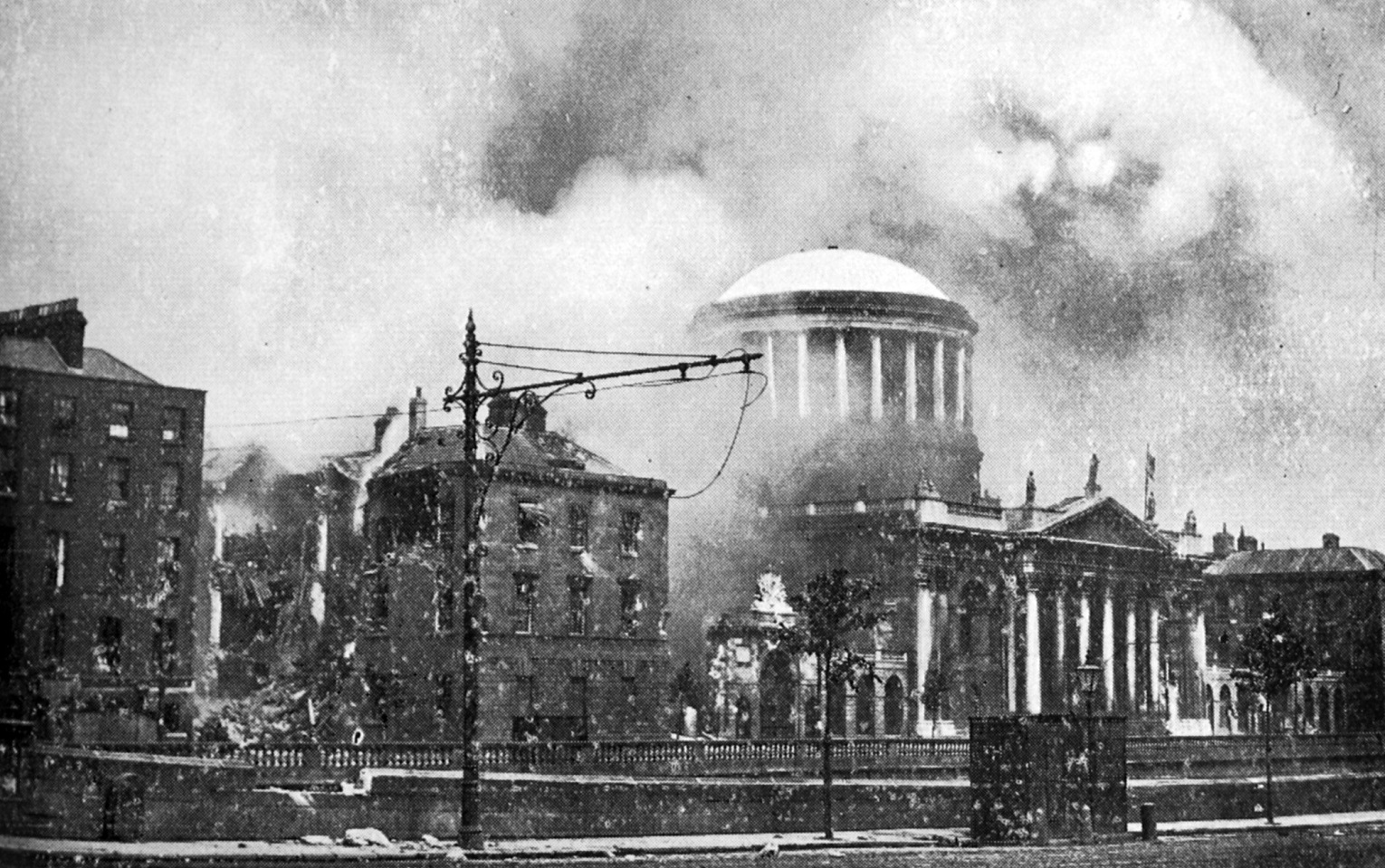 Irish Free State forces capture the Four Courts, Dublin from IRA irregulars: smoke and debris follow a great explosion. — Otago Witness, 22.8.1922
London, June 30: The Government has received news that Four Courts has been blown up, and that the insurgents surrendered at 4 o’clock. July 1: The Dublin Free State headquarters announced last evening in a communique that Mr O’Malley, on behalf of the executive in Four Courts, surrendered unconditionally to Brigadier-general O’Daly. Mr Churchill, in the House of Commons, stated that the explosion in Four Courts was caused by the springing of a mine laid by the insurgents under the part of the building which had been occupied by the Free Staters. Thirty of the latter were killed or injured by the explosion. A number of British soldiers belonging to the Border Regiment went to the Bank of Ireland and the insurgents fired on them, wounding two. A Central News telegram from Dublin states that the Four Courts’ fire was still raging today unabated. Nothing remains of the magnificent dome except the pillars and the supporting masonry. No effort can save the buildings. The surrender of the Irregulars was not marked by any of the sternness of war. As the captured men emerged the Free Staters shook hands with them, and there was a atmosphere of smiles, laughter and good-will.

A ploughing bee was held on Monday last on the Lamont Settlement at Woodlands (says the Southland News). The ploughing had got behind on a section vacated by one soldier settler and taken over by another. Mr W.E. Gaudin, of Dunedin, and Mr N.E.H. Hubbard, Government supervisor of soldier settlements, consequently arranged the ploughing bee. Owing to the rough weather, however, only three teams turned out, but eight other teams promised to do a day’s work during the week. The ploughing bee is a splendid idea. Not only does it serve as an introduction to the district for the new man, but it also promotes friendly relations, and encourages the growth of a real community spirit.

Sydney: A prominent Queensland cotton grower states that 7000 acres were harvested during the past season, yielding nearly 4.5 million pounds of seed cotton, compared with about one million pounds harvested in the previous year. This year it is anticipated that 40,000 acres will be planted. Cotton pickers are paid from 1 to 2 pence per pound, and earn from 12s 6d to 15s daily. He expressed the conviction that cotton-growing will become the cheap industry of Queensland, if not all of Australia. According to a recent statement by Mr H.C. Armstrong, one of the directors of the Australian Cotton Growing Association, which has been given entire control of the industry in Queensland, cotton growing is now being undertaken on an important
scale in Australia.

The disadvantages imposed on school children in the Chatham Islands was stressed by Mr H. Gudsell, who attended the meeting of the Canterbury School Committees Association. Mr Gudsell pointed out that most of the children had never seen a bicycle or a motor car, and were quite in ignorance of many matters in the outside world. He proposed that 20 of the senior scholars — there were about 92 children attending schools on the island — should be brought to Christchurch and billeted there for a week. — ODT, 3.7.1922