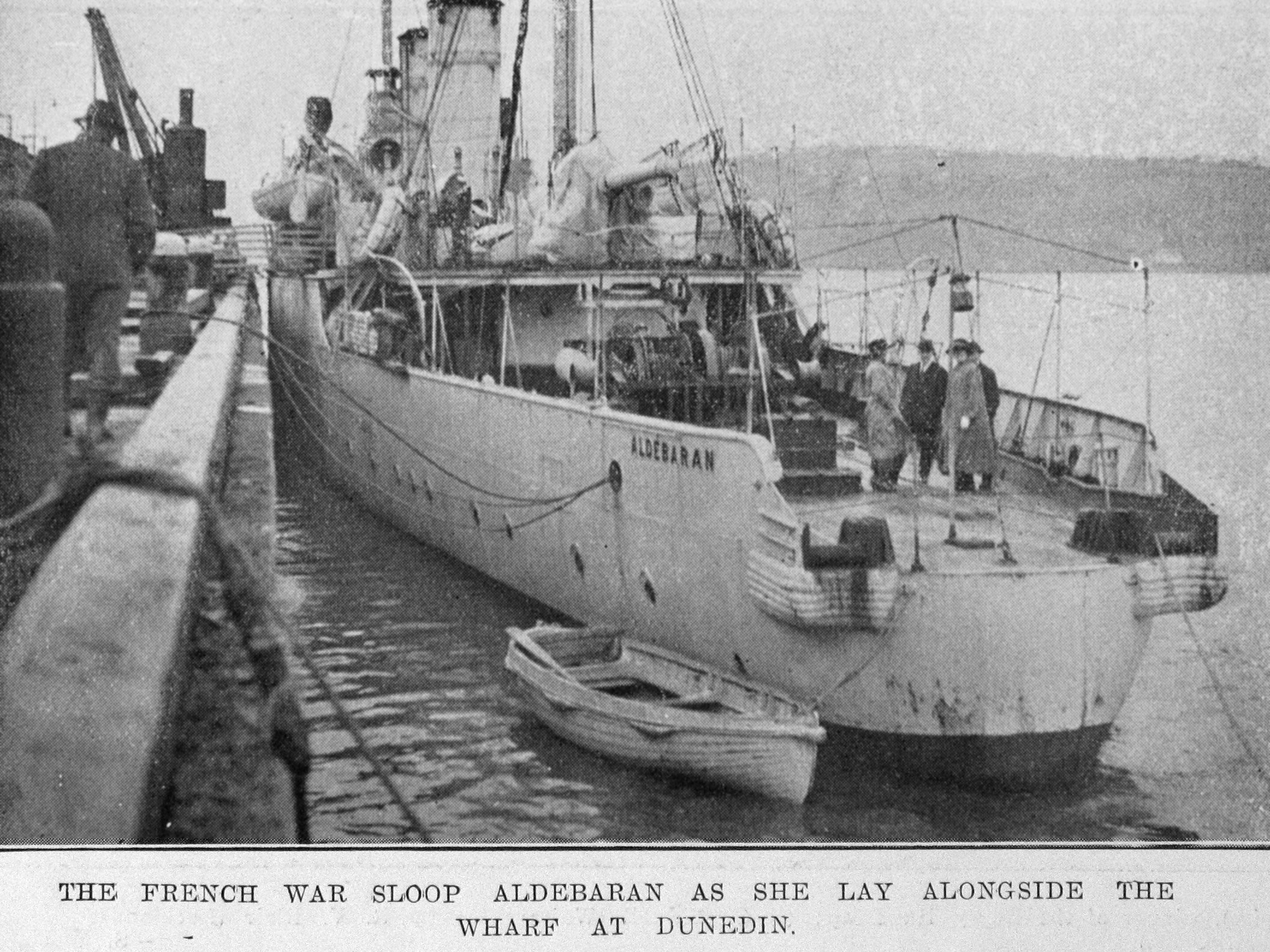 French naval sloop Aldebaran alongside Dunedin wharf. — Otago Witness, 1.11.1921
A very warm welcome has been extended to the officers and men of the French war sloop Aldebaran by the public of Dunedin, publicly and privately.  Yesterday morning Captain Solminihac returned the visit of the Mayor, being accompanied by the Acting French Consul (Mr F.O. Bridgeman), when courtesies were exchanged. During the afternoon the officers were made the guests of members of the Motor Club, who took them for a trip to the Taieri Mouth, Henley and Outram. In the evening the officers were entertained at an “at home” by the Overseas Club.

Cancer on the increase

Wellington: The annual report of the Public Health Department states that of non-notifiable diseases, increase in the death rate from cancer is most noticeable, though the year 1920 showed a slight drop, there being 8.72 deaths per 10,000 persons living, as against 9.07 in the previous year. Despite the exhaustive researches of the Cancer Commission, which have extended over a considerable period of years, there is very little more known as to the cause or causes of this dreadful disease. It has been suggested, and not without reason, that as the deaths from cancer are increasing in this as well as in other civilised countries, this department should undertake researches into the causes of this disease. But let it be considered what such research would mean. In the first place the worth of the data to be obtained in a comparatively small community such as ours is not to be compared with that of larger countries.

Moreover, a very considerable increase in our staff would be necessary to make the exhaustive inquiries involved. We cannot do better, therefore, than solicit the cooperation of the practising members of the profession in the gathering of data relative to patients, and await the reports of the researches which are being conducted under the auspices of the Cancer Commission, in the United Kingdom, in collaboration with other authorities in Europe and America.

The Public Health Department’s report said the outstanding features of the year under review were widespread epidemics of influenza, measles, and whooping cough, and increased prevalence of poliomyelitis, and an outbreak of smallpox in the Otago health district, Enteric fever showed a further marked decrease. If the present rate of progress was maintained it seemed not unreasonable to hope that ere long this disease would cease to figure among the important causes of sickness and death in the dominion. The position was extremely gratifying, and indicated the high and steadily improving standard of sanitation in New Zealand.

Mr A.E. Porritt, of the Otago Medical School, has been nominated as the Otago candidate for the Rhodes Scholarship. Mr Porritt was the only nominee at the Otago University this
year, and is the first student of the Medical School to receive nomination for this distinguished position. The University Council yesterday agreed to the nomination, and to the appointment of Professor Thompson as the Otago representative on the selection committee.