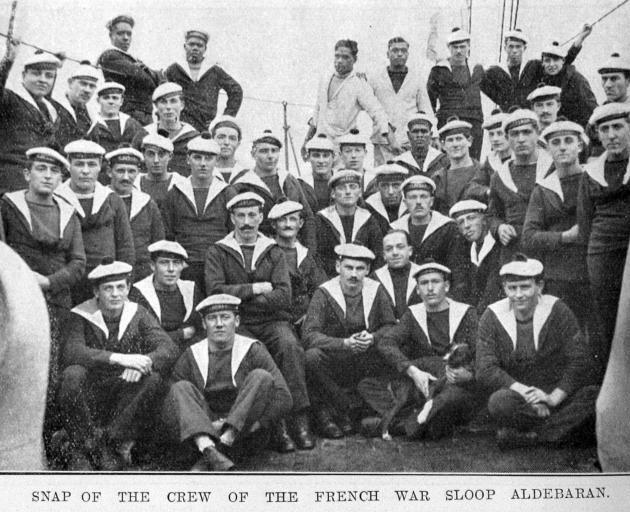 Crew of the French naval sloop Aldebaran, on a visit to Dunedin. — Otago Witness, 1.11.1921 COPIES OF PICTURE AVAILABLE FROM ODT FRONT OFFICE, LOWER STUART ST, OR WWW.OTAGOIMAGES.CO.NZ
Despite the unfavourable weather which has prevailed during the last few days everything has been done to make the visit to Dunedin of the officers and men of the French war sloop Aldebaran as pleasant as possible.

Yesterday morning a visit was paid to the Roslyn Woollen Mills, the party being accompanied by the Mayor (Mr J.S. Douglas).

In the evening the officers were present for dinner at the Otago Club, and later attended the entertainment given by the English Pierrots in the Burns Hall.

During their stay in Dunedin the members of the crew have been frequent guests at the Returned Soldiers’ Club, where they were entertained again last evening. The Aldebaran will sail at 8.30am today for Hobart and other Australian ports.

YMCA to help the unemployed

In addition to the offers which have already been made to organise entertainments on behalf of the unemployment relief fund, the

YMCA has now come forward with an offer to conduct a series of entertainments at an early date at North East Valley, Roslyn, and St Kilda. In the town hall yesterday a further four names were registered, bringing the total to 380. Owing to the rain the relief works which are in progress have been seriously interfered with this week, but it is hoped to make someprovision for the men belonging to the shift which has been standing by, so as to keep all the men employed who have so far been selected for work.

The Otago Labour Council has passed a resolution according a vote of thanks to the women  who are assisting the unemployed, to the Rev V.G. Bryan King, and also to those tradesmen who are assisting many families during the existing period of hardship.

The executive of the Dunedin Methodist Council met last evening to conclude arrangements for the citizens meeting on behalf of the Unemployment Fund.

It was decided to postpone the holding of the meeting for one week, instead of next Sunday afternoon as originally intended, as many people will be going out of town over this weekend.

The meeting has been arranged for Sunday week in the Octagon Hall, in the afternoon, when leading Methodist speakers will give addresses, and a united Methodist choir will assist.

The Mayor (Mr J.S.Douglas) has very kindly consented to be present, and it is expected the meeting will result in a considerable addition to the fund.

During a visit to the Catlins district last week Mr T. O'Byrne, secretary of the Sawmill Workers’ Union, found that the 20 mills established in this district had all been working full- time (says the Southland Times). They had a better run during the last few months than the Southland mills and were only now beginning to experience a slackness. In those mills where good reserves had been accumulated it was probable that the men would be working shorter hours, thus saving the necessity of dismissing them. — ODT, 20.10.1921.