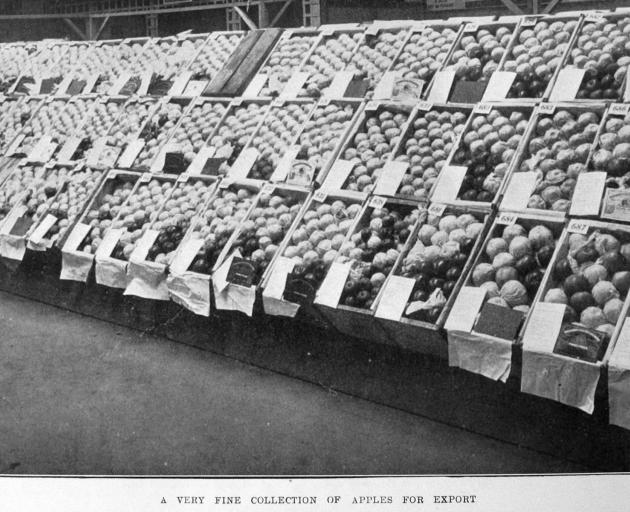 Apples for export. — Otago Witness, 7.6.1921
Some consideration was given by the City Council last evening to the question of introducing fruit barrows in Dunedin.

The matter was introduced by the deputation from the Retail Fruiterers Association, which expressed itself in strong opposition to the proposal.

As the result of subsequent discussion the committee's recommendation in favour of the idea was adopted. Mr W.G. Lloyd said the retail fruiterers wished to protest against the unfair competition which would be thrust upon them by the sanctioning of fruit barrows in the streets at a charge of £3 a year as compared with the high rates and rents which the shopkeepers had to pay.

It would be a great deal fairer, he contended, if a charge were made varying from £50 to £100 according to the stand, and if it were provided that no barrow should take up and stand within 100 yards of a fruit shop. The general committee recommended that licences for the fruit barrows be issued on the following conditions — viz, (a) no barriers to stand in any portion of George or Princes Street between Frederick Street and Stafford Street; (b) each application for a licence to be considered by the committee on its merits, due regard being given to the general character and fitness of the individual to hold a licence; (c) the actual site from which each barrow is to ply for trade to be determined by the committee.

At the regular meeting of the Otago Education Board held yesterday the board received a plea for finance for kindergarten work. Miss Darling in a letter made a very earnest appeal for financial assistance. She said the Normal Kindergarten was exceedingly badly equipped. It had been run by primary teachers who had no kindergarten training, with the result that the department had come to be regarded by teachers and students as a place where children just played and did as they pleased — a sort of glorified public nursery. That was not the case. It was in kindergarten that the New Zealand child came into an atmosphere of love and freedom, combined with law and order, straight from the hand of Nature, and right at the beginning one must plant those seeds that would bear fruit in afterlife — the seeds of true courage, politeness, good manners, kindness, unselfishness, patriotism, reverence, consideration for the rights of others, cleanliness, good habits, love of truth and right-doing, bravery and courage. She asked the board to get the Education Department to provide £500 for the exclusive use of the Normal Kindergarten Departments, and presented a long list of requirements to bring the departments up to scratch. The board decided to refer the matter to the senior inspector and the architect to report, and if the report was favourable to apply to the Education Department for the sum required.

Speaking with regard to the street refuse baskets, Cr Begg, at the meeting of the City Council last night, said it was a great pity that the public neglected to use them and continued to litter the streets.

He considered that the Women's Citizens’ Association was to be complimented on its move in regard to these baskets. The proposal to attach notices to them to attract the attention of the public was a good one. When in Auckland recently he noticed that the refuse baskets were prominently marked, and were used to a great extent, and the Dunedin public should be educated to their duty.

The matter should be impressed upon them, the tidiness of the streets being largely in their own hands. — ODT, 21.7.2021. 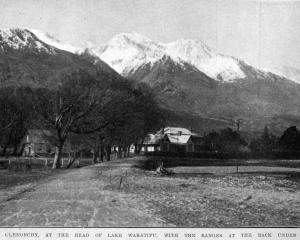