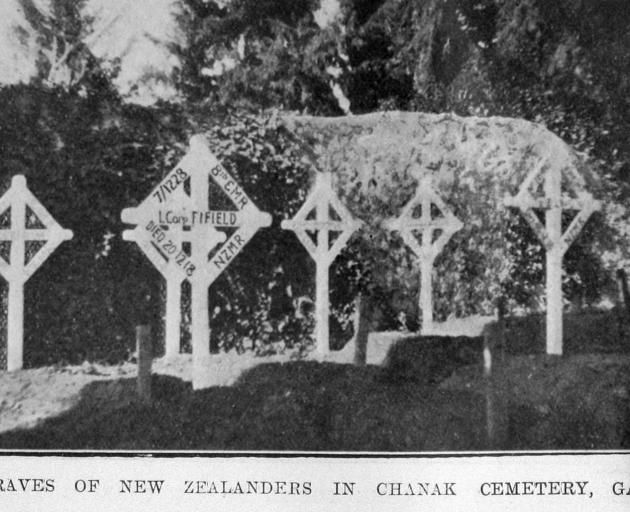 The graves of New Zealanders in Chanak cemetery, Gallipoli. — Otago Witness,3.5.1921.
Prince George, who is now a midshipman in HMS Ajax, was a member of the party who accompanied Admiral Sir J.M. de Robeck on a visit to the Gallipoli battle area and cemeteries. The Prince went to Helles, Anzac Cove, Chanak, Walker’s Ridge, Quinn’s Post, and Lone Pine, accompanied by members of the Australian graves staff.

There are mosquitoes in many parts of New Zealand, but, fortunately, there is one kind that is not represented here, known as the Anopheles. Anyone can recognise it by the fact that its nose is in line with its body, which is practically straight from end to end, and from its habit of resting on a wall with its head close to the wall and its tail lifted so that the body is at an angle of 45deg or more. Surgeon-general McGavin, in his lecture on “Sanitation”in Wellington (says the Evening Post) said that New Zealand should be very gratified that this mosquito was not found in New Zealand. It is the kind that carries malaria, and the disease cannot be communicated by any other means. There were a great many people in the dominion with malaria in their blood, ready to become sources of infection, and if the Anopheles lived here, or was introduced, there would certainly be a spread of malaria, and it would become epidemic, especially in the north of the dominion, where the climate was favourable. The lecturer said he had made careful inquiries, but could not find any evidence that the Anopheles had ever been seen in New Zealand. This was remarkable, because it flourished in places not far away.

In moving the adoption of the annual report and balance sheet at the annual meeting of the Dunedin Free Kindergarten Association yesterday, the president, Miss Alexander, said that their three kindergartens were all in good working order; the teachers were capable and enthusiastic, and Miss Bird had reported that the six students who had entered at the beginning of the year were doing well and were heartily interested in their work. It had been with much satisfaction that the committee and found itself in a position to increase the teachers’ salaries this year, when by the generosity of one who preferred not to let her left hand know what her right hand was doing, they were given £100 for two years for the payment of students, and Mr and Mrs Fels also kindly offered a bursary for the same time. These gifts, supplemented from their own funds, enabled them to allot bursaries to four students. Miss Bird, the supervisor, had done a good deal to extend the interest in kindergarten work, and the roll number had been considerably increased, notwithstanding the fact that, as a result of the war, the numbers had fallen considerably in most of the infant departments of the primary schools. They were pleased to announce that the Kelsey Yarallabuilding was now completely out of debt. The children at Caversham werecomfortable and happy in their new abode, which, however, was too small to accommodate all those who wished to enter. The Reynolds Kindergarten was full to overflowing, and there they had to record with great regret that Miss Darling, who had been director from the beginning, was leaving at the end of the month to take up the position of kindergartner to the Training College.