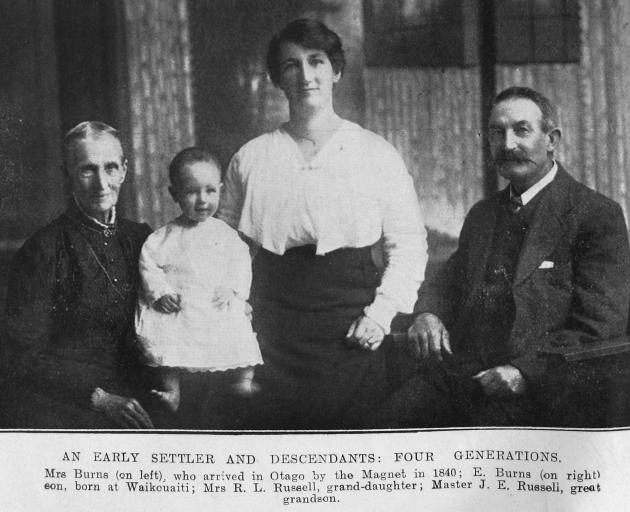 Four generations, from left: Mrs Burns, who arrived in Otago of the Magnet in 1840, her great grandson, Master J. E. Russell, grand-daughter, Mrs R. L. Russell and son, Mr E. Burns, born at Waikouaiti. — Otago Witness, 16.3.1920. COPIES OF PICTURE AVAILABLE FROM ODT FRONT OFFICE, LOWER STUART ST, OR WWW.OTAGOIMAGES.CO.NZ
With so many sources of amusement on foot on Saturday afternoon, as large an attendance as usual could scarcely be expected at the Citizen's Garden Fete; yet a large number of persons, women and children in particular, found their way to the Botanic Gardens, where the fete was held. The object of the fete was to raise funds for improving the city reserves, and to assist the Karitane-Harris Hospital. No effort had been spared to make the fete attractive, and those who attended found ample means of spending the afternoon pleasantly. The grounds were gaily decorated with flags stretched across the paths, and tents innumerable had been erected on the lawns. These latter included a huge refreshment tent run under the supervision of the Society for the Health of Women and Children, the Karitane-Harris Hospital, and the Plunket nurses, and very good business was done. The tent was at all times crowded, and the particularly active body of workers inside were kept exceedingly busy dispensing cake and afternoon tea at a modest sum. In addition there was a North-East Valley stall where sweets, soft drinks, and ice creams were procurable, a flower stall at which cut flowers and pot plants were offered for sale, a produce stall containing an immense variety of vegetables, a jumble stall where to use the words of the programme, "you could get anything you wanted," and a men's stall laden with much that would attract the fancy of the male sex. These were all money-making concerns where good value was obtainable for a reasonable outlay of cash, and customers were not scarce.

Between five and six thousand people assembled at Forbury Park and its neighbourhood on Saturday afternoon to witness some flying ‘‘stunts’’ by Captain Dickson in his aeroplane. The exhibition was timed to start at 3 p.m., but it was well on towards 4 p.m. before a start was made by the airman, who arrived from Mosgiel with the Mayor and Mr Walter Blackie as passengers. Those who waited to see the ‘‘stunts’’ were well repaid, as Captain Dickson gave a splendid exhibition of looping-the-loop and other feats of skill practised by aviators who must possess plenty of nerve for their accomplishment. It was an eye-opener for those who had not previously seen anything of the kind, and Captain Dickson was accorded an ovation when, after over an hour in the air, he landed close to the place from which he started in the centre of Forbury Park. The exhibition was favoured by perfect weather conditions, and as the aeroplane was skilfully manoeuvred between earth and sky it presented a pretty sight, and one which attracted attention from parts of the city and the hill suburbs in particular.

The growing popularity of motor cycle racing was evidenced by the large attendance at Warrington on Saturday afternoon to witness the racing arranged by the Otago Motor Club. There were probably at least 1000 spectators, and they were rewarded by seeing some splendid racing. The occasion was taken advantage of to give the Hospital soldier patients an outing and all the available men from the Dunedin Hospital and the Woodside and Montecillo Convalescent Homes were taken out in motor cars provided by the club's outing fund.